Making beer with wild yeast might be the oldest form of brewing, but when you're talking about tiny lifeforms there remains plenty to discover. And it’s that sense of discovery the folks at Wild Yeast Zoo are tapping into as they call on citizen scientists to help them better understand Australia’s unique micro-organisms.

The venture is based in Newcastle, includes local brewery Rogue Scholar among its partners, and is starting its search for wild yeasts in the surrounding Hunter region.

Evan Gibbs is one of the researchers leading Wild Yeast Zoo and, as well as being a beer fan, is undertaking a PhD focused on synthetic biology.

“I’m an avid homebrewer,” he told The Crafty Pint. “I don’t have a large brewery setup but I’ve got a brewery in my back shed and I’ve been interested in brewing for years and years – and wild yeast is just so fascinating.”

These yeast-centric zookeepers hope they’re far from alone in their love for beers made with unusual yeasts, however, which is where the “citizen scientist” side of the project comes in. Soon they’ll start sending backyard probe kits out to locals around Newcastle, complete with instructions on how to forage for yeasts thatwill then be studied and stored by Wild Yeast Zoo.

“We send out test tubes, a set of gloves, and you gather some of the dirt, sap from a tree or berries and you mail it back to us and we see if there’s something we can brew a beer with,” Evan says.

As well as Rogue Scholar, Wild Yeast Zoo is partnering with Bacterial Regulation and Transport Laboratory (BRaTlab) and The Centre of Excellence in Synthetic Biology (CoESB), and has received funding from the CSIRO’s On Prime program.

The project is highly interdisciplinary, with Dr Ben Matthews, who has a background in social science, also part of the team. Beyond allowing them to obtain a diverse collection of wild yeasts – which are incredibly localised – Ben says working with amateur yeast collectors is also a means to boost people's understanding of the micro-world around them.

“A big part of it is helping to educate people and to create a growing awareness of what's going on in the microbiome and the potentials that it has,” Ben says.

He thinks there’s a growing interest among brewers and beer drinkers in the origin of their beer – one that goes beyond the brewhouse in which it was made.

“The story behind the sourcing of the ingredients in the beer-making process is really important to how people are getting more interested in beer,” he says.

“It’s pretty clear through the conversations that have started out with scientists at our university in communication with people in the industry that there's just enormous, untapped potential out there,"

Evan gives kviek as an example of the kind of unknown yeast that could be discovered in Australia and may have myriad uses for brewers locally and in other parts of the world. Their hope goes beyond discovering unique strains of yeast or communities of bacteria too – ideally, they'll find something that can be used repeatedly by brewers to achieve consistent results.

“If they could have something which had a story, was ethically sourced, and reliable in the way in which it was likely to deliver,” Ben says, “then that would certainly be of interest and be something that could expand the emerging brewing culture.”

Adam Hardy from Rogue Scholar is certainly among those eager to embrace such wild cultures. The Novocastrian says he met Evan and Ben when they were drinking at his bar, which led to them discussing this idea for close to two years.

“I love the whole theory behind it, about citizen science programs getting out there in the wild to collect flora and fauna," he says. "And then taking them back to the lab and basically just flicking out bad guys and trying to find some good guys.”

The first Wild Scholar beer is launching tonight (Oct 27) and, while they don’t have any of their own wild yeast to use in commercial brews yet, the initial release shows what might be possible in the near future.

“I’ve brewed a beer for today that uses yeast from some native plants in California that I got off The Yeast Bay and it’s pretty funky,” Adam says, adding how difficult it can be to know what will work in brewing.

“You may get something that wouldn't make anyone sick and is alcoholic, but that doesn’t mean it's palatable.”

He’s excited about what the project means for the Hunter region too, particularly if something truly exciting is unearthed in someone’s back paddock.

“It’s good for the Hunter and going to be really nice to have yeast available that's from somewhere local. But I mean, the plan is we're going to go all around Australia.”

Beyond brewing, both Evan and Ben say they hope discovering new and useful yeasts could have much wider applications. It’s one reason why Wild Yeast Zoo complies with The Nagoya Protocol: an international agreement to which Australia isn't a signatory that relates to sharing the benefits of genetic resources in a fair and equitable way.

As an example, Saccharomyces cerevisiae, or standard brewer's yeast, is used to produce insulin for diabetics; for Wild Yeast Zoo, the possibilities of what micro animals they'll keep are endless.

“We’re about fair and equitable sharing of benefits arising from the use of them,” Ben says.

“It’s going to be increasingly important because it's certainly true that we know very little about the microbiome in Australia and what kind of resources might be available."

The collaborative Wild Scholar beer is launching at Rogue Scholar's Union Street home today (October 27). To get involved with Wild Yeast Zoo and to participate in their project, head to their website.

For more articles in The Collaborators series, head here. 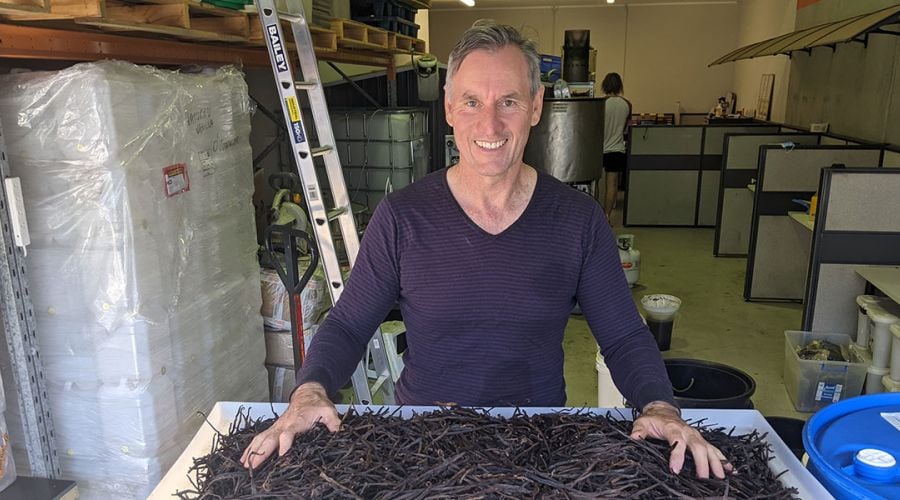 The Collaborators: The Vanilla Man

With adjunct-laden beers, particularly pastry stouts and sours, consumed in ever greater numbers by Australian drinkers, we met with Natural Vanilla’s Owen Henderson, one of Australia’s largest suppliers, to talk all things vanilla. read on