Like most regional cities in Australia, Ballarat has been slow to catch on to the craft beer revolution that has swept the country’s capitals and many of its popular tourism regions. So it was pretty ballsy of the team behind the Ballarat Beer Fest to aim so high with their inaugural event, one that combined live music, local produce and craft beer from many of Victoria’s breweries on the city’s foot oval.

Crafty Pint reader and uber-keen beer lover, Tiffany Waldron, was there to soak up the sun and a few suds. And here’s what she made of the day…

“Imagine, if you will, a warm sunny day with live music, a complacent crowd of a few thousand and a whole lot of craft beer in a country town. Sounds a little far reaching for regional Australia, doesnât it?

The inaugural Ballarat Beer Festival, held on January 21 at City Oval, was a success, with more than 4,000 people in attendance from all over Victoria. Despite a grey and chilly start, the weather picked up and the event was sold out by the early afternoon.

The event was hosted by The Beer Diva, Kirrily Waldhorn, media personality Charlie Pickering and comedian Danny McGinlay. Music from Stonefield, Jordie Lane and Claire Bowditch was punctuated by contests for punters and brewers – one of which was a blind tasting of Pickering and McGinlayâs homebrew: a Celtic Red Ale. There were activities for the kids, ensuring families were welcome to enjoy the day out as well.

The biggest disappointment of the day was that many breweries underestimated the popularity of the event, which saw only a handful still serving beer in the later hours of the day. Mountain Goat, Kooinda, and even Matilda Bay had run out of all their beers with hours of the festival still to go. Luckily, breweries like Bridge Road, True South and Holgate had extra supplies, with the last of these even heading back to their Woodend brewery to pick up more.

Some new drops were debuted, including Yowie Lager, Prickly Mosesâ newer and hoppier version of The Raconteur and Mountain Goatâs first cider âTwo Stepâ. Prickly Moses was voted âPeopleâs Choice Brewery Awardâ via Twitter before the day was out. 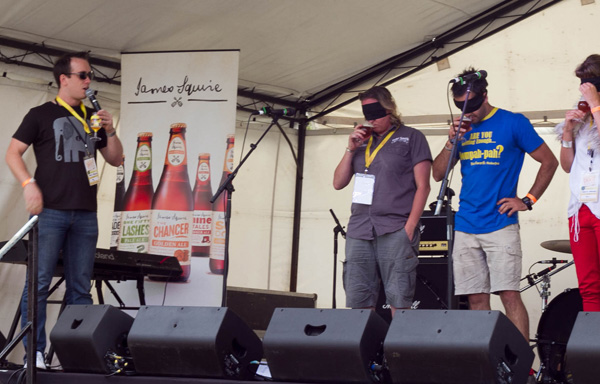 The highlight of the Ballarat Beer Festival wasnât some crazy, never sampled before beer, but instead the vibe and success of the day. There were lines to get in, lines for beer, tokens had run out, plastic cups were being passed around â¦ and yet punters seemed to disregard all of these hiccups and enjoyed the music and tasting different beers without a complaint.

When The Beer Diva is getting approached for autographs, as she was at Ballarat Beer Fest, itâs a sign of things to come for craft beer in Australia."

Thanks Tiff. Sounds like a great day out was had by all. For craft beer to take hold in Australia, we can’t just hold events for the converted and the hardcore, it also needs to be put in front of people who may never have tried it before in an environment that’s not intimidating, and that sounds like the case here. Congratulations to everyone involved.

*Photos supplied by Rory Gibson. You can keep up with Tiff’s beery adventures via Twitter – she’s never short of something to say!