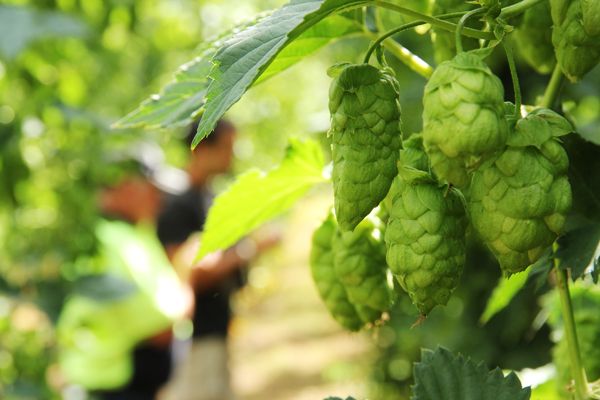 It’s collaboration time in Australia this week with no fewer than four cross border brews taking place. On Wednesday, Mikkel Borg BjergsÃ¸, the man behind Mikkeller, and Dave Bonighton went to work on their Pepperberry Black IPA Cross Breed at Mountain Goat on the same day that Christian Skovdal Andersen from Beer Here was brewing at Red Duck in Ballarat. And today, the Danish pair have been hard at work again. Christian has been at Moon Dog in Abbotsford working on a “Danish farmhouse ale”, while Mikkel flew up to Beechworth to create the “Dark Harvest” with Ben Kraus at Bridge Road.

As Ben explains: “We’ll be using freshly picked hops from the nearby Rostrevor Hop Garden, located in the Ovens valley, in the brew.”

Ben has been working closely with Rostrevor Hop Garden over the past four years, using experimental hop varieties yet to be released commercially during harvest each year.

“The theme for this beer has been inspired by the timing of Mikkel’s visit coinciding with the hop harvest at Rostrevor Hop Garden in March,” says Ben. “And as Mikkel’s visit will be after midday the brew will be pushed well into the evening, which inspired the dark theme. The Dark Harvest will be an imperial dark ale/porter brewed with freshly picked âwetâ hops, used in copious amounts, weighing in at around 7.5% alcohol.”

As things stand, the Dark Harvest will only appear in kegs at the brewery and beer bars around the country from early April. If that changes, we’ll let you know. The Cross Breed will be released in kegs and bottles. We’ll update you on plans for the Beer Here collabs as soon as the release dates are confirmed.

Mikkel, Ben, Dave and Josh Uljans from Moon Dog are among the guests at the Melbourne Food & Wine Festival Liquid Lounge Masterclasses being moderated by The Crafty Pint this weekend so if you’re coming along, we’ll be sure to ask them more about these beers. If you’re not, we’ll report back next week anyway.