The Crafty Pint is well acquainted with Jon Seltin. He’s the home brewer turned Bright brewer who has been turning out some fine beers, such as the MIA IPA, in his time in Victoria’s High Country. We know that he’s knowledgeable, enthusiastic, bearded, often brews at night in winter and is keen on adventure sports; the MIA, after all, is named because he suffered a crash landing while paragliding on the eve of its release and his colleagues called out emergency rescue. However, our knowledge of Jon could never have prepared us for this: his outrageous recreation of the poster from American Beauty, with rose petals replaced with hops. The only thing to do is let him tell you all about it…

“It happened as a joke. It was the end of the harvest and they were picking Topaz. For some reason we were talking about movie poster and I said we should do American Beauty with hops. It was entirely a joke, a visual gag about how ridiculous it would be to have a slightly portly brewer lie naked in a bed of hops. Everyone at the brewery took it seriously and bullied me into doing it.

“It was funny as everyone was tired at the end of the hop harvest. The guys at Rostrevor work 24 hours a day at this time of year and the poor guy that was operating the conditioning bed [where the photo was taken] had been working 12 hour shifts, seven days a week for three weeks. He was well and truly exhausted and thought this was highly comical: he was trying to push through his last batch of hops and some weirdo comes along wanting to get his kit off and jump in!

“It was incredibly sticky and smelt fantastic. The Topaz hops were massive – they’re freakish – and they were dripping with resin. This year’s crop has hugely high alpha acids and oils; the shoes I was wearing to climb in with still smell really strongly of hops.” 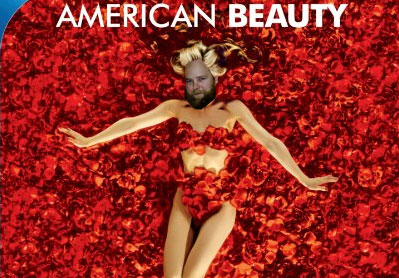 Bright are big fans of Topaz hops – although we weren’t aware just how big – but have been playing around with other new varieties too. Today marks the launch of their 150 Ale, brewed to mark the 150th anniversary of Bright, which featured the as-yet-unreleased 013 hop, which will also be used in the Good Beer Week brew on Tuesday. The beer will be a feature of the High Country Harvest festival as well as making an appearance at the dinner Bright is hosting with Simone’s.

Jon says the fresh hop beer has elements of American brown ales and IPAs and “is really moreish”. More importantly, however, is the question of whether he was naked in the hop bed. And, just like a Scotsman in a kilt, you’re going to have to ask him yourself…