From barrel-aged stouts for breakfast in Bendigo to Japanese delights in North Fitzroy, Sunday was the day Good Beer Week really started to spread its wings for 2012. Add in Mother’s Day bonuses for mums visiting Red Hill, Thunder Road and the Great Australasian Beer Spectapular plus beer and cider sorbet classes and an event for the ladies in Newport and you have pretty solid evidence that beer is finding favour well beyond its traditional haunts.

For The Crafty Pint, Sunday saw us pop into the Thunder Road Open House where there was entertainment for the family, a curry competition and the launch of their first “extreme” beer – as well as the first appearance outside GABS of the Richmond Pilsner. We called in early (as in before midday) and already the benches and tables were filling up; there must have been more than 50 people there before we departed for a slot on 3RRR’s Eat It. Having sampled the Richmond Pilsner on Friday night, we headed straight for the XXX IPA, a dark, 7.8% hopped up number that had some nice choc orange aromas and a marmalade like bitterness amid the malts, albeit one held in check, as you’d expect from the Thunder Road team. Blended from a couple of brews on the pilot brewery as a Good Beer Week special, it showed that even when going “extreme” they maintain balance and control.

Over at the RRR studios, there was time for a quick spruik for the festival, a year on from Good Beer Week’s first appearance on Cam Smith’s show. We left the hosts with a NÃ¸gne Ã / Bridge Road India Saison and Moylna’s Tipperary Pale in honour of some of the guests who had landed in Melbourne yesterday and headed straight into the action at GABS and the Junction Beer Hall, via the Great Northern, with Steve Grossman from Sierra Nevada also flying in for the first ever tapping of Sierra Nevada beers in Australia at Beer DeLuxe. With Eric Ottaway from Brooklyn already in town along with a host of Kiwi brewers, there is quite an international flavour to the week already.

We made a pit stop at the Great Northern to sample beers from some of the oldest (Last Drop and Bootleg) and the newest (Cheeky Monkey) breweries from WA. We also discovered that the Pint of Origin concept has an acronym now – PoO – so don’t be surprised if you hear an otherwise sensible seeming beer lover announce they’re off to a “Poo pub” this week.

As for those taking part in events, a tired and emotional Josh Uljans from Moon Dog reported back from his trip to Bendigo for The New Bohemia with: “The beers (Billy Ray Citrus, Freaks and Geeks, Black Lung and a hoppy Barley Wine) were matched with three delicious courses. In particular the smokey sausage, pork belly, crispy bacon and eggs were the perfect accompaniment to the Black Lung. A damn fine way to dust off the chronic hangover from two consecutive days at GABS.”

As for the Brew Day Feast at the Portland Hotel – like The New Bohemia, a sell out – host Dave Langlands said: “Yesterday was a great success! It was relaxing afternoon of shared food, conversation and a celebration of beer. Everyone sat back and saw [Portland brewer] Dan [Dainton] knock out a fresh batch of Highwayman while enjoying the sweet malty smell and the beer and food matches we had on offer.

“The best thing was the few dramatic beer epiphanies that occurred throughout the day. People going from âI donât really like beerâ to âOh my god, that is @#$%ing with my brain. I shouldnât like this, but I love it!â. I love being there when people discover good beer for the first time.”

If that sounds like your thing, we believe there are still a few tickets left for the Portland’s other event, Dinner with Chuck – an evening with Aussie brewing legend, Dr Chuck Hahn.

Over at St Peter’s, the Beer Diva hosted a sellout Beer & Cider Sorbet Masterclass. She said: “We hosted the event at St Peter’s Bar & Restaurant in Melbourne Place, a very cool little venue. We had a really great bunch of people coming along, with only three out of the 30-plus being what I would call ‘beer geeks’… not a familiar face in sight which is what I really wanted with this event. There was probably a 50:50 split of men and women, some coming for their love of cider, others because they saw the program and the event sparked their interest.

“Som from Ricketts Point was incredible, taking half of the group at a time through the process of creating a stout ice-cream. He then finished off the event with three trays of tasting delights, the first a scoop of Natural Blonde sorbet, sprinkled with grated lemon zest, next mini-cones piped with butterscotch and topped with stout ice-cream and scattered with caramel pieces and the finale was Napoleon Apple Cider sorbet mini-ice cream sticks. Each guest then left with a goody bag with four beers / ciders donated by Grand Ridge and Napoleone & Co cider, four ice-cream tubs (packed with dry ice into mini-eskies!) and an apron. I think the value was exceptional and everyone really genuinely had a great time… there was very positive feedback from the class.”

It’s another big night tonight, especially for us here at Crafty Towers as it’s the launch of the first ever People’s Pint, the Double Hoptendre chosen in the nationwide competition we ran earlier in the year. We’ve got 100 people coming to Temple Brewery & Brasserie for an evening of new beers, tasty nibbles, giveaways and musical comedy. We will also announce which awesome international craft brewery has agreed to partner with Temple and Good Beer Week for the inaugural Young Brewer Scholarship that will see one young Aussie sent to work overseas for two weeks, all expenses paid. Which one will it be….? 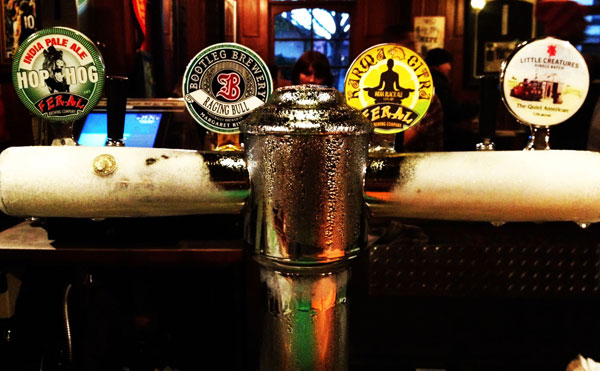 And if you can’t find something to keep you happy among that offering, there’s no hope! Have a great Good Beer Monday!!

@MISHKAPANTS: Sobering up on the train, I can definitely say I’ve never before had a brewer try to pash me before to try to sell their merch. #GABS2012

@xpanner: #MICE2012 Coffee expo one weekend, #GABS2012 beer festival the next. This is what a week in heaven must be like.

@PiaPoynton: I think being on twitter during #GoodBeerWeek is just beer torture if you’re not there!

@jackmcintyre: Heading home after an excellent #gabs2012. I think a week of #GBW leave is required next year :–)