Good Beer Week: The Bishop vs The Pope

“I really hate beer,” she says.

From the seriousness of her expression and the tone with which she is stating her opinion, you’d be a fool to doubt her. Coming at the end of a beer versus wine dinner in one of the Good Beer Week venues where we’re hoping to showcase beer to a new crowd, it’s not the ideal response. But then…

“I did quite like the one with the entree, however.”

Ah, a minor win! With Bridge Road’s Chevalier Biere de Garde, no less, a hater finds a little love in their heart for beer.

Her admittance (under only the tiniest amount of pressure) was far from the only win on an evening of excellent food paired with fine Victorian wines and beers at Matt Wilkinson’s dual venues, with the Bishop of Ostia taking on its “cross-dressing mummy” Pope Joan in a Beer vs Wine Smackdown. At the end of the night, a show of hands revealed only a quarter of the guests were established beer people â the rest were Pope Joan regulars who had come along to try something different. And of that latter group, the majority said the night had changed their opinions of beer.

In all honesty, it would take a heart of stone to have walked away from the dinner feeling anything but enthused. The evening opened with casual canapes served with a King Valley Prosecco and Red Duck’s delicate Pale Ale before guests were moved from the Bishop to be seated inside Pope Joan and the covered outdoor area between the two venues. The food had been designed by Matt and, in the main, his chef Jason Newton, then presented to resident drinks experts Lori and Marek to find the perfect wine and beer match respectively. 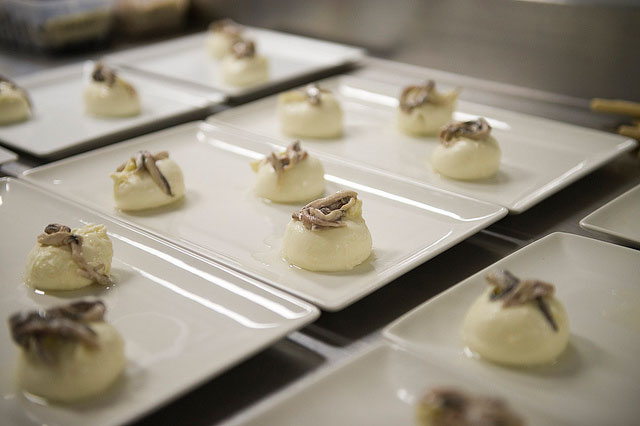 They came up with some interesting contrasts too, most notably when the Biere de Garde – rich, dark, fruity, spicy and every so slightly funky – was put up against a 2011 Chrismont Reisling. They were, in many respects, chalk and cheese yet lined up with an array of entrees – squid, fennel and caper salad; cauliflower, wagyu bresoala, lima beans and truffle vinaigrette; Jerusalem artichokes, barley, celery, mizuna, apple and sherry – they performed in different ways, ways that often changed by the mouthful. The beer seemed the more natural match for the cauliflower and artichokes; the wine hit it off with the capers like teenage lovebirds whose parents have gone away for the weekend.

Throughout the evening, a show of hands was taken to see who felt beer or wine was the better match. And throughout it was close, despite the vociferous efforts of Josie Bones beer guy James Greenfield (on hand to describe the beers) and his crew to sway the debate. The dishes were exquisite and creative in equal measure, with nice touches such as the succulent butter milk poached pork neck arriving in a metal mess tin and some truly picturesque creations, including a dessert based on a recipe from a Louisiana Death Row prisoner’s final meal. Most courses were served platter style to encourage sharing – beer is, after all, all about shared moments – while the vast majority of ingredients were local, seasonal and organic.

For The Crafty Pint, it was a 3-1 verdict in favour of beer, with one course too close to call and the pick of all the drinks Quealy’s 2009 “Rageous” Shiraz / Sangiovese / Pinot Noir blend (sorry!). According to Matt, who admitted he couldn’t actually count, beer snuck over the finishing line first in the Smackdown by a nose too. Whether he had counted correctly or not, it was a win for Good Beer Week: putting good locally brewed craft beers in front of people who would never normally come across them and doing so in an environment that isn’t a traditional beer venue with food of the highest quality in a convivial atmosphere.

As Aaron Cullen, who took the fantastic photos of the night you can view below, said of his first such event: “I could get used to this.”