The journey made by strong, hoppy pale ales from British breweries to the mouths of colonials in the British Empire in India is the most famous in beer’s long and colourful history. Not just because it showed the great lengths to which the Brits would go to keep their people merry but because the beer style that it spawned – the India Pale Ale or IPA – has, in recent times, become one of the major drivers behind the growth of craft beer and brewers' and drinkers' love of hops. It’s a journey that is being recreated by a Tasmanian brewer, who last week loaded two 100 litre casks filled with beer onto the Spirit of Tasmania II in which they will travel back and forth across the Bass Strait 24 times to recreate the 10,000km journey via the Suez Canal that some of the original IPAs would have traveled.

Willie Simpson, beer writer and brewer at Seven Sheds in Railton, came up with the idea after deciding to mark this year’s hop harvest with an IPA.

“We always do something when we pick the hops grown at the brewery and this year Evan, my assistant brewer, suggested we made an IPA using all the Leggett* hops to see what we get out of them,” says Willie. “We picked the whole row and ended up with 14kg of wet hops that, after I’d dried them in my oast shed, gave us 4.5kg. We used Millennium as the main bittering hop then four additions through the rest of the brew – three late in the kettle and one in the hopback.

“I pick up a sprucey, pine needle character in the beer, while Evan gets a real pineapple character. After brewing we thought about dry-hopping it but after tasting it I thought it was beautifully balanced with the high alcohol [6.8 per cent] and decided against it.”

Getting to that point was the easy part. Getting the beer ready for its sea journey has been rather more involved.

The casks Willie had obtained from Lark Distillery had previously been used for two other beers so had to be prepared with sulphur first. Once ready and filled, some beer soaked into the wood and some leaked so topping up was required. Then, due to concerns about the casks becoming airborne as they travelled across rough seas, Willie decided that they should be mounted on a pallet securely, so he brought in a handyman to construct a cradle with a yoke on top.

On top of that, they decided that the bungs in the casks should be strapped into place, while the whole caboodle – casks, pallet and cradle – has been wrapped several times in plastic to keep it away from inquisitive souls. Even that doesn’t even take into account the time spent negotiating with the ferry’s operators to convince them it was a really good idea to carry some experimental beer back and forth the Bass Strait for a month…

“The best thing is that the manager of Spirit of Tasmania II lives in Railton and he loves the idea,” says Willie. “I took the pallet down on Thursday in my van. The whole lot weighs 300kg so I had to borrow Cement Australia’s forklift to load it then a wharfie had to come down to take it off.

“The casks will be back in Devonport at the end of June, by which time they’ll have travelled roughly 10,000km. I like the idea of them rocking and rolling around and don’t know if there will be any residual whisky character, but I’m hoping there will be a distinct difference between the Bass Strait IPA and the Leggett IPA [that went into the casks].” 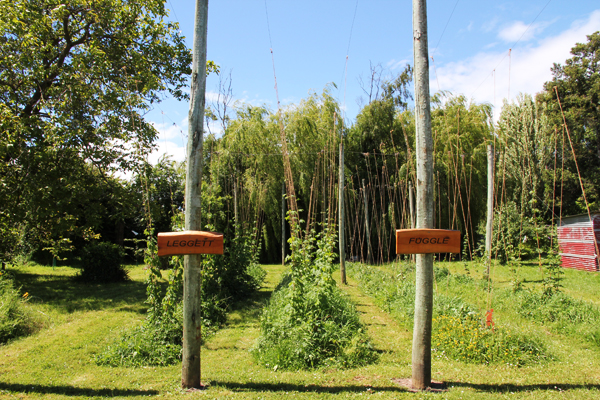 The casked beer isn’t the only Seven Sheds offering on the ferries now either. Operator TT Line has been increasing the range of local produce on offer recently and has added the Paradise Pale to its beer list. There is even talk of Willie doing talks about beer on board in the future.

âThis is the start of many local Tasmanian initiatives,â says Spirit of Tasmania Retail & Hospitality General Manager Nick Harriman. âWe are committed to supporting Tasmanian suppliers and offering a great Tasmanian range of produce and beverages on our ships.â

The casks should provide enough beer for 400 500ml bottles, which will be available via Seven Sheds later in the year. The two beers previously matured in the casks – the Royal Willie (a version of his spiced ale Willie Warmer) and Up Yer Kilt (using the brewery’s 100 per cent peat-smoked Smoking Bagpipes) – are available from the cellar door now.