Building A Temple To Beer

It’s the quiet ones you have to watch out for*. And so it is that, after several months of radio silence and a conspicuous absence from taps and bottleshop fridges, the Temple Brewing team is preparing to unleash its well-guarded secret upon the world. The odd rumour here and a whisper there had suggested the Melbourne brewers were concocting grand plans for their own venue. And, while we’ll have to wait until February for the full glory to be revealed, it appears those rumours were well founded. 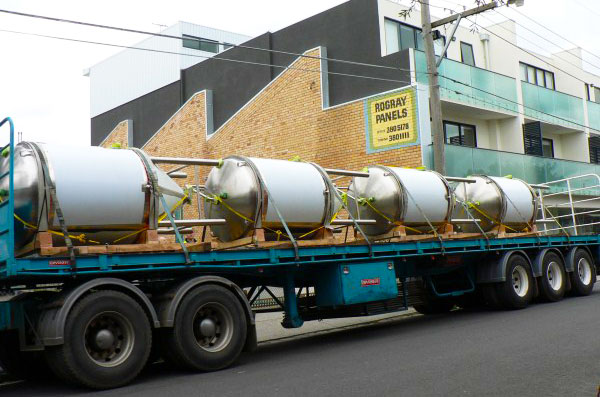 Having established a reputation for making consistently excellent beer despite operating like brewing gypsies – taking their gear and ingredients to various breweries around Victoria while they worked out how to fund a base of their own – Temple are on the verge of taking the next step. They secured a venue just off Lygon Street, in East Brunswick, earlier this year, have taken delivery of a custom-built brewery from world-leading Canadians Newlands and are embarking on a major renovation ready for the opening of the Temple Brewery and Brasserie. The Crafty Pint’s been given a sneak peek at some of the architect’s drawings and it looks like it’s going to blow people away. Sadly, we’re not allowed to publish any of those drawings yet…

“We spent a long time searching to make sure we had the right location,” says Ron Feruglio, the husband half of Temple. “East Brunswick has a lot of great stuff going on food wise so it was the ideal spot for us.” 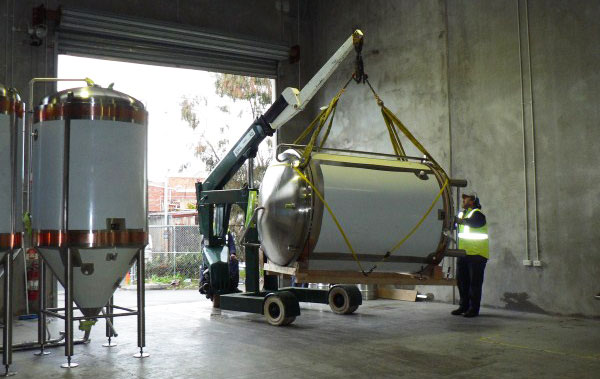 … and is swung into place

They’ll have a capacity of 120 over two floors, a bar serving their full range of beers (Pale, Saison, Special Bitter and Japanese Soba Ale) plus regular specials, some brewed on their new 50l pilot brewery. The kitchen will be serving small plates with a Mediterranean bent suited to eating with beer and music will be kept to the background – there will be no live bands or DJs. The brewery will be visible through a glass wall in the rear of the factory unit alongside a cool room, warm room and lab. The upstairs area will also be used for functions and regular beer education sessions and structured tastings.

“We haven’t held back on anything,” says Renata. “Everything from the facade on is designed to impress.”

It’s safe to say The Crafty Pint is pretty darned excited. Anyone who’s tasted any of Temple’s beers will know that Ron’s fastidious attention to detail in his recipes and brewing techniques has resulted in some of the best beers in Australia. If they’re taking the same approach to their new home, it’s going to be good. 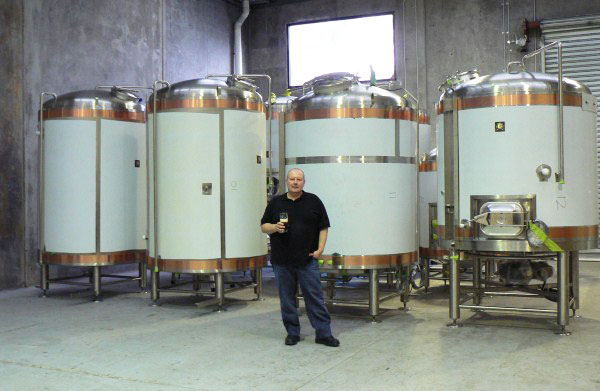 … in time for a well-earned celebratory beer

As for the brewery, it’s a thing of beauty (if you’re into such things) – as it should be given the couple has committed everything, including their house, to the project. Designed by Ron and built over seven months in Canada, it was delivered earlier this year, giving Temple a 1800l brew length with the ability to brew twice a day, should they want to. Hopheads will be particularly pleased to hear they’ve invested in a rather large hop back.

The Feruglios hope to open mid-February. In the meantime, keep your eyes on The Crafty Pint later this week for news of a new, very limited release beer from Temple.

(*An apology to Renata. How dare we suggest you’re quiet!)