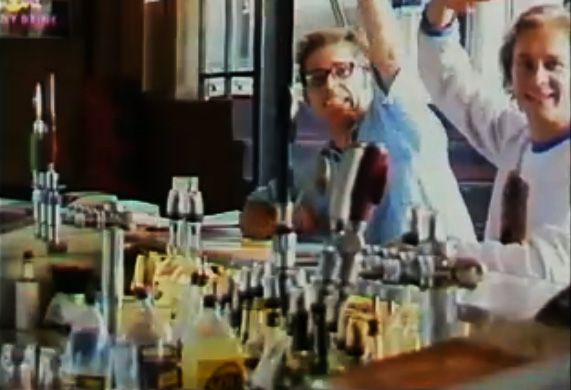 “I can’t work out if it’s brilliant or dumb,” said Cam, when he first told The Crafty Pint about the pinnacle of Mountain Goat’s 15th birthday celebration plans. The answer, of course, was that it was both and thus better than brilliant and dumber than dumb.

Well, “it” involves a crocodile-infested river, a boat or a helicopter (or both), dinner in a bistro with a menu boasting that its food is “NOT THE BEST, BUT GOOD ENOUGH”, the pouring of a new, high alcohol, intensely flavoured beer for drinkers who live and breathe XXXX Gold, and a host who goes by the name Happy.

“For our tenth year, we went to all the obvious places,” says brewery co-founder Cam Hines (pictured above left in a screenshot from a film shot in the brewery’s very early days). “So this time we wanted to add somewhere quirky and fun. I researched on the internet, trying to find remote outback bars and then looking at how to get to them. There were some that sounded great, but they were so far away from anywhere.

“Then one Saturday morning, I was searching for Australia’s smallest bar and Goat Island Lodge came up, so I just called up the owner and got talking to him.”

For the uninitiated, which presumably is all of you, Goat Island Lodge is a remote resort a couple of hours from Darwin’s airport. You might think: “A couple of hours – that’s not remote.” But those two hours require visitors to make their way by road to the Adelaide River and commandeer a boat to make it to the island. Or hire a chopper. And, if you choose to travel by boat, you need to be aware that the Adelaide River is full of crocs.

As Cam says: “There’s no good strategic reason to go, other than to have fun and try and interesting experiment – the ultimate craft beer challenge.”

For their tenth birthday celebrations they toured many of the country’s top beer bars pouring the first ever batch of Double Hightail. This time they’ll be doing the same, except with a yet-to-be-brewed Triple Hightail, more venues across Australia, and with the “ultimate craft beer challenge” being to see how Happy’s friends – presumably all traveling in by boat – take to an evening of Rare Breeds. Given the logistics, even getting the beers there will be a challenge in itself. 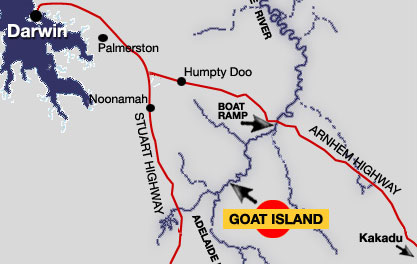 Getting to Goat Island

Cam’s fellow Goat owner, Dave Bonighton (right above) says: “The tenth anniversary was great. We’d never really sent any beers other than Hightail outside Melbourne before so it was great to get out there. When we were discussing ideas for the 15th birthday, someone said why not go up again from the Double Hightail, so that’s what we’re doing. It will be an intense version of the Hightail, will hit around nine per cent, with a mellow bitterness and rich malts. It’s using all the same ingredients – just less water.”

For Dave it’s a first trip to the Northern Territory, while Cam has been to Darwin but no further. So in the midst of a tour that takes in established craft beer venues such as the GB in Richmond (where they secured their first ever tap), The Wheaty, the New Sydney Hotel, Brisbane’s Bitter Suite and Clancy’s in Freo, Goat Island promises to be as much of experience for them as the locals.

“We wanted to relive those days 15 years ago when we had to sell the idea of craft beer,” says Dave, “to take the party somewhere that was more than likely untouched by craft beer. When Cam came across Goat Island, it wrote itself.

“In those early days, there was never a reason to stop. [Starting a brewery] seemed a great idea at the time. We didn’t know the beer industry and we didn’t have brewing backgrounds at that point, we just did what we loved in beer and couldn’t find in Melbourne and stuck to our guns. Over the years we’ve learnt so much and done all sorts of qualifications, but [those early days] seem like two weeks ago for some reason…”

“That we’ve continued on and are now in that big building with 100 hectolitre tanks, I think, "How did this happen?‘,” says Cam. “We thought craft beer would take off in Australia – we just thought it would happen a lot sooner!” 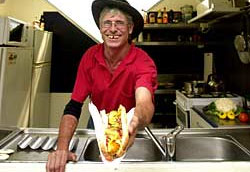 Happy himself with some “GOOD ENOUGH” tucker

Also on the horizon as 15 approaches is the arrival of a third beer in permanent 330ml bottles – their IPA – while both are off to the States where they continue to make steady inroads with their IPA and Double Hightail.

Then, prior to the birthday tour, Dave is heading to Thornbridge in the UK to brew a porter, a follow up to the collaborative brew that became the Thorny Goat early last year.

In the meantime, there are still some logistics to be smoothed out for the Goat Island trip.

“Last time I spoke to Kai [Happy’s first name] he was talking through some options for boats,” says Cam. “He says there’s a few guys that have one big enough.

“He said, ‘There’s this guy who lives down the river, but he’s a crazy bastard so we won’t use him’ but he’s been very enthusiastic from the start. We just can’t wait to get out there and see where he lives.”

The Crafty Pint will be making the journey with the Goat guys. If you’d like to be there too, the party on Goat Island is on October 20. You’ll have to get yourself to NT and find a boat or chopper, but we’re pretty sure it’ll be worth it.