Starting a Brewery: The Boatrocker Story

Ever wondered what it’s like to undertake the journey from home brewer to commercial brewer? As he stands on the verge of commissioning his own brewery, Matt Houghton, co-founder of the Boatrocker Brewing Company, is about to complete a journey started a quarter of a century ago. And he’s agreed to share it with us in a series of articles offering an insight into the leap from home brewer to pro brewer.

What made you decide to become a commercial brewer?
It all started when I was about 15 years old, and avidly collecting my dadâs foreign empty beer bottles (I just loved the labels!). There was a program on SBS on Saturday evenings called âThe Beer Hunterâ and it had me hooked. Here was this funny little man presenting more than just the tastes of the beer, but presenting it in a way that made me appreciate beerâs importance in a social and historical context. Michael Jackson’s program and subsequent books and guides were exceptionally important to me when traveling and living overseas. He definitely set me on the path to enlightenment!

Making the leap from home brewer to pro brewer was something not taken lightly, and it was perhaps a series of events and feelings that made me pursue the dream. My day job, whilst rewarding in its own way, was just not floating my boat anymore. I would find myself daydreaming about what brew I was going to do on the weekend, or spend my spare time scouring the internet reading about brewing or searching for that elusive piece of homebrewing equipment on eBay…

I was spending so much time thinking about brewing beer that I thought I should go and study it, and then I would see if taking brewing further was for me. Well, it turned out it was! Brewing had the right amount of science, as well as artistic license, both in the finished product and the packaging, that my time at Ballarat Uni sealed it for me.

What was your brewing background to that point?
My brewing background started when I was doing a Biological Sciences degree at LaTrobe Uni back in the early nineties… I lived in college for a couple of years, and access to affordable beer was limited as a student. So, thanks to Cooperâs, we concealed a homebrew kit in the laundry, and proceeded to make pretty horrible beer! No temperature control, just throw in the extract, hot water, bit of cold water, yeast and wait, then bottle.

I continued to home brew ever since that time, continually trying to better the previous batch. Fast forward to the 21st century, and I had spent a number of years overseas learning to appreciate the importance of beer both historically and socially, and knew that I wanted to gain a more in-depth knowledge of brewing. I had advanced to all grain brewing nearly every weekend, and just couldnât stop thinking about beer – and my soon to be wife! (I must point out that it was at this time I met my wife, who was very encouraging about me studying brewing, and also the idea of taking homebrewing further.)

Why did you decide to go down the contract route?
The contract brewing route is one that is paved with possibilities and problems. Whilst there is not the same initial investment as buying an entire brewery, itâs still a lot of money. And who is to say that somebody’s $50,000 is not as important to that person as someone elseâs $500,000? Itâs all relative to what you have. Having said that, contract brewing allowed us to take a product to market, to test the waters so to speak. Thankfully the market liked what we were doing, which was encouraging.

I guess the downside to entering the beer market via contract brewing, is being able to brew a beer with flavour, and still sell it at a reasonable price.

How did you decide who to use?
Our search for a contract brewer started at the end of 2008. Back then, there was really only AIB (based in Sydney with a 10,000 litre minimum), or Southern Bay (based near Geelong, with a 6,000 to 7,000 litre minimum). At the end of the day, it came down to price and location. We would have loved to use AIB, due to the quality of their equipment and beers, however, their troubles with Baronâs (now thankfully resolved), coupled with the pricing and location, meant our choice was fairly clear. 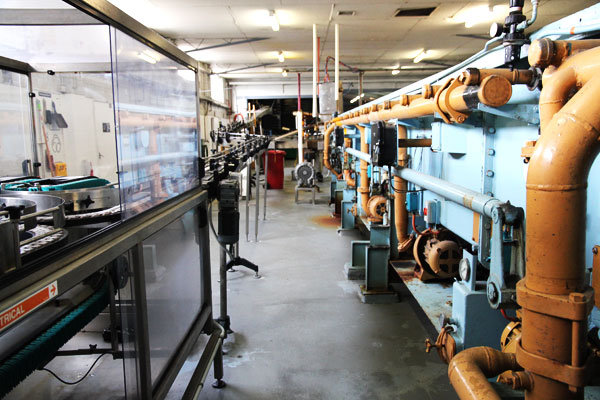 The packaging line at Southern Bay, where Boatrocker beers were brewed for the first three years

Did you find any obstacles in your way because you were a contract brewer?
We faced a number of obstacles on different fronts when we released our beers in early 2009. Firstly from the retailers, as many were sceptical that a craft beer could come out of Southern Bay [which had yet to undergo the changes that have seen the brewery launch its own craft beer range in recent months]. And secondly, from the brewers – some, not all. I was quite shocked that there was such resistance from the state organisation (VAMI) to having a contract brewer amongst their ranks. As an organisation, a mentality of protectionism was firmly ensconced in their mindset, and offers of help in any way from us were firmly rejected or ignored.

Thankfully, in 2011, the Craft Beer Industry Association was formed, which allows a contract brewer to contribute to the industry on an even platform.

How did you draw up your recipes and translate them to the beer you wanted?
Our recipes all stemmed from pilot batches done in my garage, or with a mate (Donny) on his balcony in Brunswick. The first thing I would do is think of what beer we wanted to make, imagine the flavours and aromatics in my head, and then set about working out the recipe. We use ProMash to do the recipe development, as well as pen and paper. Nothing beats a scribble!

Once we had worked on the recipe, weâd run a pilot batch of ~100 litres – possibly a fraction too much beer when it doesnât turn out right…

From there, we needed to take into account variables that would occur at Southern Bay (hop utilisation decrease, hot side aeration, oxidation, and filtration, among other things) that didnât happen on our pilot plant.

How much involvement did you have in the first beer?
When we first went to SBBC in 2009, I think we were equal parts shock and equal parts fresh air for the crew down there. We wanted to brew a beer using ingredients and techniques that they hadnât used much, if ever, before.

I have always made myself available on brewday, because I wanted as much involvement as possible in our beer. I wasnât allowed to turn the knobs and dials, however starting the brewday at 6am emptying sacks of grain into the mill, or adding hops when necessary, or taking pH measurements and so on was all part of producing our first beer.

Did it come out exactly how we wanted it? No. There have been tweaks along the way, as we discovered and tried to overcome the shortcomings of the brewing process. We certainly had our ups and downs whilst contract brewing, and now, with the commissioning of our Newlands brewhouse, we will be consistently good. Excitingly, with our new equipment we will have the opportunity for creativity and diversity of beer styles, something which was not possible while we contract brewed.

Next up: Deciding to invest in steel.