Ninety per cent of the world’s earthquakes occur around the Pacific rim, and it is home to many of the world’s active volcanos. It is also the origin of Kava, tiki cocktails and big, fat party guys in Hawaiian shirts. Now it’s hard to pinpoint exactly what this climate of imminent chaos and hedonism would possibly do to a culture but after visiting Hashigo Zake’s Pacific Beer Expo it is clear that, whatever the effect is, it makes for some extreme beer and a great party.

Held in the Wellington Boat shed over Labour Weekend (October 20 to 21) just metres from the ocean on the city’s picturesque waterfront the Pacific Beer Expo has become an annual showcase of Pacific beer with a focus on the new and interesting beers being produced in the region. A relatively small event, with only 300 tickets sold to each session, it comprised of six tasting stations featuring more 30 different beers. With beers from Australia, New Zealand and the West Coast of the USA, the expo is a celebration of these regions' brewers sense of community, discovery, originality, and their close relationship with the land, which is all tied together with an underlying sense of unhinged inventiveness.

That said, I may be reading far too much into this festival and what it represents. Because, at the end of the day, it’s a beer fest, man: chill out, get yourself a bratwurst and enjoy the party. To be fair, this expo did have a great relaxed atmosphere in which to drink, eat, enjoy the sun (a rarity in Wellington). But for the growing number of people looking to get more out of their glass, to be challenged to think and to experience new things in craft beer, it was all here. With such a diverse range of beers on offer which utilise unique ingredients, explore different brewing and ageing techniques and display a real sense of boundary pushing, it only seems fair to acknowledge that this movement is strong and growing fast.

The man behind Wellington’s Hashigo Zake Cult Beer Bar and leader of the team behind the Pacific Beer Expo, Dominic Kelly, sees events like this as a natural progression. He has witnessed first hand the explosion in demand for new and interesting beer in Wellington and the rising popularity of breweries such as Garage Project, 8 Wired, Rogue, Bear Republic and Feral. He knew he wanted to start a regular beer expo and this Pacific idea ticked all the boxes. There seems to be a pretty tight knit beer community in Wellington and this expo reflects that. Good people gathering to try good beer.

Dominic’s team of loyal volunteers, most of them Hashigo Zake staff and regulars kept the beer flowing and loved to tell you all about the beers they were serving. Beers which, in some cases, needed specific warnings to be issued before consumption. Specifically Garage Project’s (Welington) latest offering, Coconut Kava.

This mildly face-numbing Kava infused Brown Ale came with a tiki stamp on your hand so that if you were admitted to hospital the doctors would know what you had taken. This was one of many beers that really showcased unique Pacific ingredients as well as the brewers' strong ties with the land. Similarly, the Kumara Brown Ale out of local nano-brewery Kereru Brewing Company (Upper Hutt) took an everyday Kiwi staple, the Kumara (Purple Sweet Potato), and utilised its earthy sweetness to create something similar to a pumpkin ale yet uniquely Kiwi.

Speaking of pumpkin ales, the Southern Tier (New York) Pumpking was definitely one of the runaway hits of the expo. This 8.6 per cent Pumpkin Ale, while not technically from a Pacific brewery, utilised caramelised pumpkin and spices fantastically. A few other US beers featured unique ingredients in a interesting way, such as the Rouge (Oregon) Chipotle Ale, which captured the earthy smokiness of chipotle peppers while the Ballast Point (California) Old Balmy Apricot at 10.7 per cent was fruity and bold. 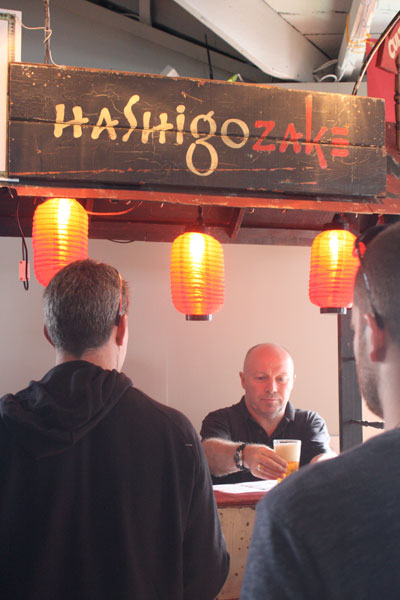 It wouldn’t be a beer expo without a clutch of US style hop bombs and this one had a fair few. The winner of the festival’s People’s Choice was from New Plymouth NZ: a dangerously drinkable 10.5 per cent Imperial APA that was absolutely bursting with hops. Representing hops in the red, white and blue corner was the standout Left Coast Hop Juice, a 9.7 per cent IIPA which more than lived up to its name. And I must not forget Australia’s favourite IPA, this time delivered with a twist: Feral’s Barrel Fermented Hop Hog. The Chardonnay Barrel fermentation added some distinct oak characteristics to this already great beer.

The only disappointment of the expo was that the shipments from Baird Brewing (Japan) and Jungle Beer (Singapore) didn’t make it in time for the festival. The beers that did make it, however, more than made up for this.

I could go on and rave about every other beer in the festival and there were many more worth a mention but talking about beer and drinking it are two very different experiences. If you want the full experience make a note in your diary for Labour Weekend (NZ) 2013 and get to Wellington for the Expo. Next years event has already been locked in and your can only expect it to get bigger, better and more extreme.

A big thanks to Dominic and his team for their warm hospitality and congratulations on a successful event. Craft beer definitely has some serious roots in Wellington and it is growing fast.

Thanks to Dave for offering to pen this piece for The Crafty Pint. If you’d like to thank him on our behalf, you’ll normally find him in his natural habitat, beer in hand, at the Portland Hotel in Melbourne’s CBD.