On Friday afternoon, while most of us were preparing for the long Australia Day weekend, one man found himself unwittingly in something of a funk. The cause of said funk was an email that had landed in his inbox earlier that day. On the surface it seemed innocent enough. It announced that Byron Bay Pale Lager was to be released nationwide in bottles, and contained such harmless lines as:

“Following our sponsorship of the Byron Bay Surfing Festival and in the middle of a hot summer, we thought it was the perfect time to release the Pale Lager into pack. We love brewing beers that speak to our lifestyle up here and to share that Byron Bay magic with the rest of Australia,â says Barry Schadel, owner of the Byron Bay Brewery.

The thing was, the guy receiving this email was Matt Kirkegaard, founder and editor of Australian Brews News. For those unfamiliar with the site, it frequently casts an eye into the murkier parts of the Australian beer world; while The Crafty Pint heads off on flights of fancy about the latest beer releases, Matt and his team can often be found with their heads in the archives uncovering the latest half-truths or worse from the nation’s brewers and marketing companies. The site is, in Matt’s own words, The Cranky Pint.

As such, when the media release landed, Matt was aware that there is no bottling line at Byron Bay Brewery. He also noted that the media release had come from the company employed by CUB to spread the word about its beer releases, so he decided to ask a few questions. We won’t go into detail here, as you can read the entire story on Brews News, but let’s just say he didn’t get what he was hoping for, even if it was what he was probably expectingâ¦

In short, he has surmised that one of the country’s brewing behemoths is licensing the Byron Bay brand, brewing the beer at its Warnervale Brewery, and handling all sales and marketing itself. “So what?” you may well ask. Well, from the beer’s packaging itself (which includes a handy map on the back of the bottle showing you just how close Byron Bay Brewery is to the town’s Main Beach), you would have no way of knowing this and, says Matt, CUB/SABMiller don’t want you to know either.

“It’s simply a case of CUB doing everything it can to make this bottled beer look like it’s fully controlled by a tiny little brewery in Byron Bay,” he says. “Quite simply it’s not.

“Authenticity is a vexed and complex issue and the notion of contract brewing stirs up passions, but this is a clear case of one of the world’s largest brewing company’s hiding behind one of the world’s smallest and doing everything it can to hide the fact from the consumer.

“The beer business is robust and companies always seem to push the limits but, once again, CUB has crossed the line and just kept going.” 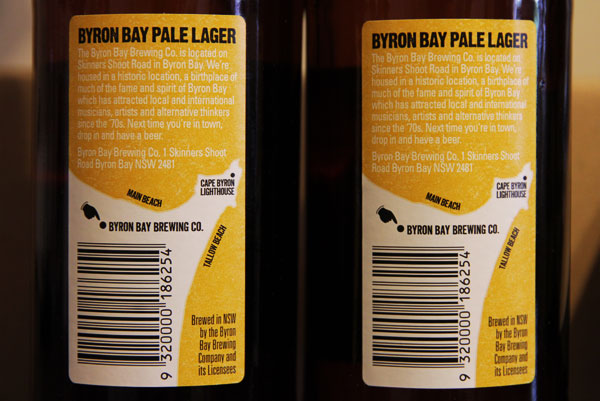 As a result, Matt has published an open letter to Avi Mervis, the CEO of SABMiller, and launched a Facebook page to campaign for transparency. Transparency, or the lack of it, is but one aspect of a number that threaten to pose fresh challenges to the growth of beer from smaller breweries in Australia, following hot on the heels of the launch of the Sail & Anchor and Steamrail ranges of beers, which instantly landed primo positions in the fridges and on the shelves of liquor outlets owned by Coles and Woolworths to the detriment of other brewery’s beers.

The danger is that such practices threaten the further marginalisation of smaller, genuine craft breweries who are already fighting an uphill battle to gain recognition and market share. The knowledge (and, perhaps, desire to learn) of the average Australian beer drinker remains low, with few people armed with enough knowledge to tell a “faux craft” brand produced by a multinational and boosted by a large marketing fund from something crafted with passion and integrity by people who have poured their heart, soul and – in all likelihood – life savings into their brewing dream.

As Matt says in his open letter, practices such as that involving the Byron Bay brand risk “misleading consumers”, “fuel[ling] the cynicism that many consumers already feel about multinational brewers” and could “unfairly hurt the brewers who make up a very small but vibrant part of the Australian beer market”.

He concludes: “This is not a call not to make the beer. It is a call to be transparent and to clearly label your involvement in the brewing and marketing of your beer, both on the packaging and in your marketing communication, so that beer drinkers can make informed decisions.”

UPDATED WITH RESPONSE FROM LIQUID IDEAS, THE COMPANY MARKETING THE BEER:

“Byron Bay Brewing Co continues to be independently owned by Barry Schadel. The Byron Bay Brewery owns the brand, the formula and the product which it brews in draught beer at its Byron Bay brewhouse.

“CUB has a licencing agreement to produce and distribute its Pale Lager in pack form. This provides Byron Bay with a national platform, something that they would not be able to achieve by themselves and from which they benefit.

“As Byron Bay Brewing Co is the owner of its brand in Australia, it is their brewery details that are on the label together with the reference that some products may be brewed by licensees in NSW. This is common practice for beer labels in Australia.

“There is no intention to mislead anyone and we believe that fundamentally this is Barry’s product, not ours.”

In the meantime, the chances are that if you read The Crafty Pint you care about your beer: who makes it, where they make it and what goes into it so that you can make these “informed decisions”. If that is the case, we suggest you check out Matt’s open letter and Facebook page and, if in agreement, sign on the dotted line (well, click “ Like” on his page – tis the 21st Century after all).