Getting Blind With Crafty: Pilsners

The Crafty Pint’s blind tasting panels are up and running for 2013. The first took place late last year with a panel focused mainly on premium lagers, after we were contacted by Hahn and Malt Shovel Brewery founder Dr Chuck Hahn looking for feedback on his new recipe Hahn Premium Australian Pilsener. From now on, we will be making these panels a monthly fixture on the site.

To kick off 2013, we figured we should look at pilsners again, this time with more of a focus on those produced by Australian microbreweries. This would allow us to pit Chuck’s beer, which topped the lineup last time, against beers from a number of Australia’s craft breweries. As a barometer of where the Australian industry stands we also included a small number of European classics as well as Croucher’s take on the style, which is the reigning Champion Pilsner from the 2012 Australian International Beer Awards.

The process was tweaked a little from last time. For one, we had a genuine AIBA steward on hand to oversee matters. Pete Mitcham AKA Professor Pilsner AKA Beer Blokes came armed with containers full of tasting glasses so that we were able to have a fresh glass for each beer. He also came with some admonishments, namely that the pizzas The Crafty Pint planned on serving would have to wait until the tasting was done as our choice of toppings was highly inappropriate â hot salami, roasted eggplant, Gorgonzola, etc. Ahem…

The scoring system was also tweaked a little. Alongside marks out of five for appearance, aroma and flavour, there was a mark out of 10 for overall impression. Thus each beer was to be given a score out of 25. The panel of tasters numbered four, including two brewers (Adrian from 3 Ravens and Matt from Boatrocker) and Andy, a beer lover with an obsession with big American IPAs to bring the common touch to proceedings.

This time around, there were 18 beers to be sampled plus a calibration beer served first to check that the judges were all roughly on the same page in terms of scoring (they were). Other than the calibration beer, the early rounds passed without leaving too much of an impression, with things starting to pick up about halfway through. The New World hops of the Croucher stood out a mile â as did the beer itself â while the European beers were fairly easy to spot amongst the Australians, with Trumer again highly distinctive.

Comments ranged from the colourful – “Great head, shitty every thing else, like a shabby sex worker” – to the more agricultural â “Arse in a bottle”. Listening to them as he beavered away on the production line, Professor Pilsner couldn’t resist some chuckling at some of the beers that were winning praise. And, when it came to the reveal once the 18 beers had been sampled, there was similar surprise to last time at the names making up the podium. Not so much that Croucher came first but the identity of the beer in second place… Just as Hahn’s Premium Australian Pilsener (which, six weeks older, finished in the middle of the pile) topped the podium last time around, this time another beer from one of the larger Australian breweries was on the podium ahead of Weihenstephan.

Once more, with beers having been purchased from a number of different places and no guarantee of freshness, there were some results that can be disregarded. For example, the Wils Pils from The Bootleg – a former trophy winner at the AIBAs no less – was not in a good state, suffering one imagines from both distance (it’s travelled from WA to Victoria) and potentially age. Similarly, the Pilsner Urquell was close to its best before date and, as such, received mixed comments along the lines of “interesting and complex but not in a good state”.

There was one “red herring” thrown in there too. We slipped in a bottle of Byron Bay Pale Lager, inspired by the storm that has grown up around its labelling in recent weeks. A high score from one of the panellists (we’re not saying who) lifted it clear of the bottom.

Anyway, the results (and where the beers were purchased): 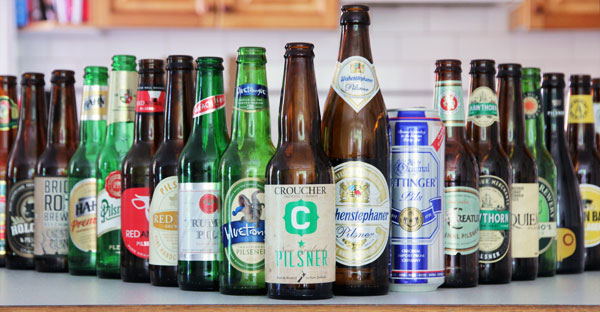 Please note: We were unable to locate some other Australian pilsners in time for the tasting so apologies to those brewers who aren’t featured

So, congratulations to Bluetongue for its second spot and to Red Hill, whose relatively recent addition to their year round range was the second ranked Australian beer. Next up is IPAs, with the panel reconvening mid-March, this time with a third brewer and a beer rep added to the lineup. Further refinements of the process are underway. See you then…