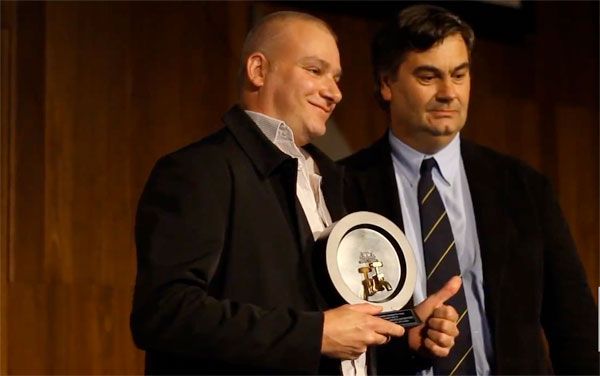 To mark its 20th anniversary last year, the organisers of the Australian International Beer Awards commissioned a commemorative beer. The Collaborator from WA’s Feral and Victorian brewery 2 Brothers was an Australian Brown Ale released at the awards last May. Such was the success of the beer, both in terms of how it tasted and for raising the profile of the awards, that they’ve decided to do it again in 2013.

This time around, the invited the reigning 2012 Champion Large and Small Australian Breweries, Feral and Canberra’s Wig & Pen to get together, which they did at the end of last week to create the Pig Pen. The brewers behind the two breweries, Brendan Varis (Feral) and Richard Watkins (Wig & Pen) have created a beer described as “an innovative âfree range aleâ” that contains ingredients sourced from around the globe, including malt from the UK, wild and conventional yeast from Belgium and the US, and Australian hops.

âWe sought inspiration for Pig Pen from the AIBAâs international flavour, sourcing ingredients from around the world to develop a âfree range aleâ,“ says Richard (pictured above collecting his trophy at last year’s Gala Dinner), whose Canberra brewpub is know for one of the most eclectic ranges of beer in Australia, from exquisite blended, barrel-aged sours to traditional British style real ales.

âBrendan and I used malt, hops and wild and conventional yeast, as well as doses of Canberra and WA micro flora and Australiaâs finest water to produce the foundation of the brew."

The beer will debut at this year’s Gala Dinner for the AIBA, which takes place during Good Beer Week on May 23. That is the night when the winners from the almost 1,500 beers entered in this year’s awards will be announced. Judging for the 2013 AIBA commenced in Melbourne today.

âIt is a privilege to brew with my longtime friend Richard at the Wig & Pen,“ says Brendan. "Itâs days like these that make you realise what a great industry brewing is to be in.”

The Pig Pen will also go on tap as one of the speciality beers at this Great Australasian Beer SpecTAPular (GABS), which runs from May 24 to 26 at the Royal Exhibition Building in Melbourne. These will be the only opportunities to try the beer.

Prior to that, beer lovers have the chance to meet Richard and Brendan in Melbourne this week at the AIBA âMeet the Judgesâ events being held in partnership with Good Beer Week. Split across two locations – the Royston and The Alehouse Project – they give drinkers that chance to catch up with the brewers from across the world who have congregated in Melbourne this week for the judging in an informal setting. Things kick off at 8pm, with entry free and beers available at bar prices. For more info, head here.

Tickets to the AIBA Presentation Dinner can be purchased here, with tickets for GABS available here. The full program for Good Beer Week 2013, where you can buy tickets for most other events, is online here with print copies available in all participating venues.