Imagine a salt beef bagel; one made with beef that has been marinating for 12 hours in pale ale, chilli and malt. Sounds good, doesnât it? Now imagine bacon, but not just any bacon; this one is made from pork belly soaked in salt, sugar and beer then smoked over spent grain. Mouth watering yet?

If so, these are just two of the reasons you should find out about Gerrard ‘Mitch’ Mitchell, chef at Perthâs Five Bar and the man behind Beersine.

Mitch defines Beersine as âa style or method of cooking, especially as a characteristic of a particular grain, hop, or yeastâ. Through this philosophy he has created a range of products using both beer and brewing ingredients such as pale ale cheese, hop olive oil, beef jerky and hop honey.

Beersine allows Mitch to indulge in his passion for craft beer, good food and sharing it with others. From Australian hops to spent grain and malt, all can be found as key ingredients in Mitchâs foods.

As he says: âEverything that’s in a brewery goes into my food…except the brewer.“ Itâs about taking people’s ideas of beer and food and turning them on their head, he adds. âI want to make people think about what they are putting in their mouth.”

Beersine began in the kitchen at The Monk in Fremantle where Mitch began working after eight years in London perfecting his trade as a chef. Already a craft beer convert, walking past the brewery every day Mitch couldnât help but be lured in by the aromas of the brewhouse. Often he would try to guess which beer was being brewed from what he could smell; more often than not he was correct.

As brewing caught more of his attention he started to see brewing ingredients differently; the sight of spent grain triggered his brain to think: âWhat can I do with that?â

âWine based cooking was what everyone did,â Mitch says of his time in London. But he saw a lot more potential in beer. âWith beer you get to play more, itâs not so structured."

Soon The Monk was serving daily specials of beer laden dishes such as a Pilsner Tart using Saaz hops and pilsner beer. His love of craft beer collided with his love of great food and Beersine was born.

All of his products start at home, where he has a range of malts from pale to dark wheat.

âHome is playtime, thatâs where you come up with stuff,“ he say.

The first Beersine product Mitch created was the Beersine Pale Ale Cheese, a fusion of American pale ale with locally produced cheddar and now there are Red Ale and Witbier versions available too.

But what does Mitch recommend to eat with the cheese?

âHop honey, of courseâ, he says with a smile; the Beersine Hop Honey infuses local WA honey with Australian hops. As for beer matching: âAn IPA or Rauchbier with the pale ale cheese, a big malty dubbel with the witbier and a rye IPA with the red ale cheeseâ.

A more recent addition to the Beersine family is a Hop Extra Virgin Olive Oil; itâs made with a combination of Hallertau hops and locally sourced fresh Mount Hood hops.

âI like the oil as a dressing on salad leafs or drizzled over steak whilst itâs resting,â he says. Also coming soon is a Beersine smokey BBQ sauce made using smoked spent grains. 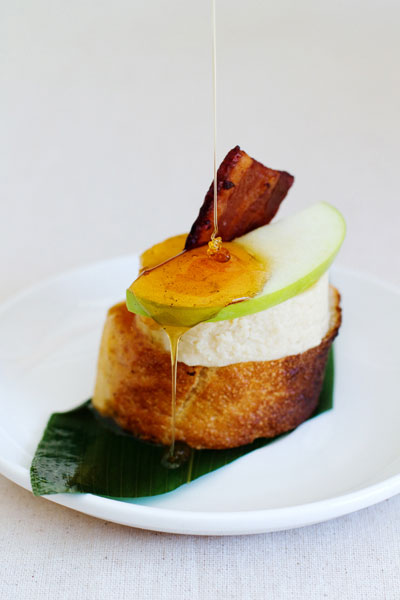 Beer cheese on a “beerguette” with apple and beer bacon

His talents have been on display outside his home and restaurant too. Punters were able to enjoy Beersine foods at the recent South West Craft Beer Festival and the Easter weekend celebrations at Colonial Brewery. Looking ahead, if you want to see what all the fuss is about for yourself, there are plenty of opportunities. He will be at a beer and food pairing afternoon for Slow Food Perth at the end of the April. For those unfamiliar with Slow Food Perth, itâs a convivium of Slow Food – an international, not-for-profit organisation focused on good, clean and fair food – and his session will feature all local produce specially matched to six local brews, you can find out more about the event here. Mitch will also be participating in a number of Good Beer Week events, including East Vs West: Beer and Food Title Fight and Abbey Collaby 3.

When heâs not Beersine you’ll find Mitch in the kitchen at Five Bar where, in between serving up the daily menu, he creates speciality dishes for their regular beer events, such as roast roulade of goat leg with chevre and beer baked quince. I’d heartily recommend popping in and grabbing one of his favourite pairings at Five: the Steak Tartare and Feral Hop Hog.

Beersine Cheese is now available at:
The Merrywell, Five Bar, International Beer Shop, The Taste of Balingup and Mane Liquor

And coming soon to:
Colonial Brewing Company, The Raffles, The Print Hall and The Royal on the Waterfront

Pia has been covering the WA, in particular the Margaret River, beer scene for The Crafty Pint for several months now. She is the creator of the girlplusbeer blog, which we suggest you check out too.