As a brewery, Red Hill on the Mornington Peninsula produces beers in which the ingredients sit in perfect harmony with each other. Therefore it’s good to know that the brewers making them appear to have pretty much nothing in common (other than a love of beer).

When not bickering over the stereo, Tim (an Aussie) and Simon (a Pom) are responsible for the beers coming out of Dave and Karen Golding’s brewery these days – and also for the latest Crafty Pint Brew & A. Read on… and enjoy!

Epiphany beer â the one that set you on the road to becoming a brewer?
Tim – The can that Dad let me hold while he was mowing his lawn. It was handed back empty
Simon – Red Hill Temptation; I knew I had to make beer like that 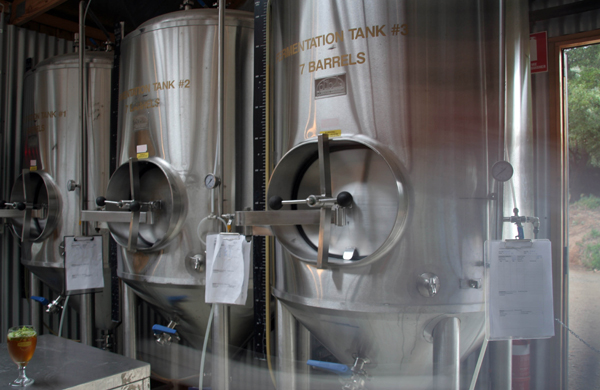 Desert island beer â the one to keep you going if you were stranded for the rest of your days?
Tim – Chimay White
Simon – Pheonix Brewery Wobbly Bob (the 6.5% one before they messed around and reduced it to 5%)

What are we likely to hear cranking from the stereo on brew days?
Tim – Banging Techno
Simon – If I’m brewing I get control of the music. A bit more rock and roll: Beatles, Pink Floyd, Oasis, Charlatans and, of course, Johnny Cash

If you were a beer style, what would you be?
Tim – Strong Belgian Golden Ale – straight to the point, makes you feel all warm inside but can knock you on your arse if not careful
Simon – Imperial Stout – Strong, dark, smooth, complex with a lovely white head. Deceptively intoxicating and good with cheese

The best thing you’ve ever traded for beer?
Tim – A ticket to rainbow serpent festival
Simon – My new teeth

When I’m not making or drinking beer, you’ll find me…
Tim – At home relieving my darling Jen from motherly duties
Simon – Trying to study for my Grad Certificate in Brewing while thinking about beer/sleeping/drunk

Your hope for beer in Australia?
Tim – For the microbrewery scene to keep on getting stronger and for our beers to become consistently better. Also for excise to be dealt with in a fair way
Simon – As happened with wine, that the variety, quality and production of beer increases and Australia becomes a world leader in microbrewed beers. That the public of Australia continues to demand better quality, more interesting beers and realises the amazingly diverse array of flavours that are possible with beer