“It’s been a strange and savage journey,” says Willie Simpson as he marks five years at the helm of Seven Sheds. It’s one that’s seen him move from home brewer to commercial brewer and, as of this year, hang up his typewriter after 19 years as the Sydney Morning Herald’s beer writer too.

From the hop farm, cellar door and erstwhile meadery (of which more later) he and partner Catherine Stark set up in Railton, in Northwest Tasmania, he has sent out 100 per cent peat smoked beers, melomels, a spiced Willie Warmer and even a beer that recreated a historic sea journey into the world. And it sounds like they’re just hitting their straps, with 5,000 people coming through the cellar door each year.

“It feels like five years compressed in a third of that time,” he says. “I guess that’s why we celebrate these milestones. It’s been a funny one for us because we’ve been gradually shedding day jobs. We had a regional business plan which said that the business should be supporting us with some sort of full-time income by year three. That pretty much happened so it’s going to sound like this has all been carefully planned. A lot of people think that starting the brewery was a cunning plan that I’d had for years and years [but it wasn’t].”

Today, pretty much every drop of his beer is sold in Tasmania, other than that ordered direct from the brewery online. They once felt that it was crucial to sell beer in Melbourne (it’s actually easier for them to get beer to Melbourne via Devonport than it is to deliver to Hobart), but when that proved an unsatisfactory arrangement they returned to a local focus that has paid off.

“[When we started] I wouldn’t have thought that we would have had 10 tap points around Tasmania,” says Willie. “We should produce 40,000 litres this calendar year and I’m confident I can sell all of that in Tasmania.

“Hobart is going ahead in leaps and bounds; we’ve got four taps in Salamanca now. Alchemy in Launceston has a great range of Tassie beer too. The Kentish Ale is on tap in Queenstown and we’re doing a keg a week over summer at the Mole Creek pub.”

In recent months, there have been some upgrades to the brewery (located in the largest of the seven sheds on his home plot) that allow for increased batch length and shorter brew days – but not a desire to get any bigger.

“We’re at the stage where this little, artisan brewery has reached saturation point,” he says, admitting they considered more tank space and increased production but concluding that “it’s important to remind ourselves that we are artisans. When we go to festivals, I relate more to those other stallholders that are cheese producers or produce smoked salmon or lettuce than the larger microbreweries.”

Having realised in year two that he didn’t have to be a full time brewer to run Seven Sheds, Willie is now onto his third assistant brewer. Among them was Evan Hunter, who was prised from Lark Distillery and brought some of his own ideas to the brewery that live on to this day.

“He was the one that wanted to do Smoking Bagpipes [the 100 per cent peated malt beer that may have predated Yeastie Boys Rex Attitude – just – in a case of great minds thinking alike on either side of the Tasman]. I’m now looking at a way of bringing peat smoking in house as I can see a beer like that having potential to distribute further.

“He came up with the IPA too and I learnt there was a huge taste for IPAs. The Stella has been so successful. Then there’s the Leggett â we did one batch last year and one more this year.”

As for his favourites from five years of experimentation, Willie retains a soft spot for the Kentish Ale â his first beer. It still makes up 40 per cent of production and is the brewery’s flagship beer â currently pouring from six of the brewery’s 10 taps around has Tasmania.

“The rest started off as seasonal but then became regulars. That’s been a real lesson for me. You can have ideas about how many beers you want at a time but you have to be open to what customers tell you. The Willie Warmer was supposed to be for winter, then Max Allen wrote about it [which meant] we had the Willie Warmer outselling the Kentish and Paradise Pale at one Festival. Now, apart from our regulars, we do an IPA every three months and are doing a Porter for the first time.

“As for the Bass Strait IPA, I couldn’t believe the publicity we got for it. We launched it in August which is traditionally our slowest month. We were up 20 per cent on visitation and spend in August, and a lot was northwest coasters coming because they took pride in the fact that it was connected to the port at Devonport. People who would never have come here normally came by.”

That beer recreated the journey taken by the original IPAs from England to India, traversing the Bass Strait for a month in barrels from Lark Distillery. A similar project is underway as you read this. This time, a new Fuggled Porter has been placed inside a brace of French oak wooden casks, re-fashioned by Hobart cooper Adam Bones from a single barrel which had previously held pinot noir from Frogmore Creek Winery in southern Tasmania.

Stowed aboard Spirit of Tasmania II on April 20, this special consignment will travel across the Bass Strait between Devonport and Melbourne some 50 times over a two-month period, roughly equivalent to the journey from England to Australia (the same route several hogsheads of porter travelled out to the colony aboard the Second Fleet). 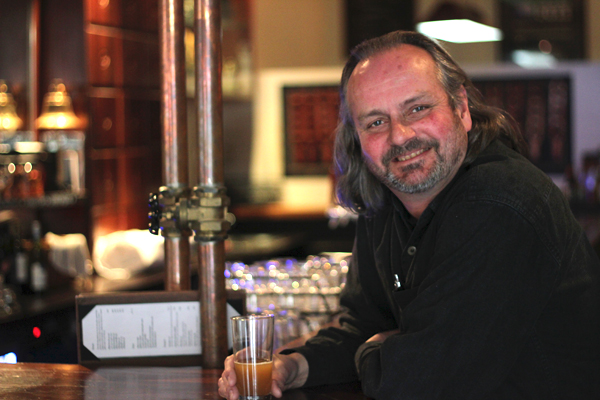 Enjoying a beer at the Portland Hotel

“I’m hoping the time on board will increase the wood ageing and bring out the wine characters,” says Willie.

“The New Sydney has been very important for us because I was doing stuff there [presenting beer appreciation nights] before I was making beer. Every new beer we had ever done has gone on there. It’s great when you know, like with this porter, that you can sell the whole lot in kegs without any difficulty. I’ve never had to go and cold sell beer and now the problem is we have to turn down new outlets.”

With both he and Catherine now employed full time by the brewery it’s a good problem to have. And creates a situation in which he hopes to return the business to what it was always supposed to be.

“It’s actually called Seven Sheds Brewery & Meadery, but the mead has fallen by the wayside,” he says. “I want to revisit it.”

Willie is hosting a special HOPS dinner at the New Sydney tonight.