South West At The Fest

Somewhere in south west WA there is a brewery tank full of hefeweizen made with cacao husks. A few kilometers away is another brewery tank, but this one is full of porter made with coconut and vanilla beans. Yet another contains a “big, malty, hoppy” beer. At least they did… Now they, like the brewers behind them have taken a road trip to Melbourne to represent the region at Good Beer Week.

Like all good road trips, the destination is worth the long haul, with the beers and brewers featuring heavily at both the Pint of Origin WA showcase and the Great Australasian Beer SpecTAPular (GABS). The events give the brewers a chance to showcase their creativity in the form of new beers as well as pouring their flagship beers to a host of thirsty punters on the east coast.

Cheeky Monkey is brewing an imperial red ale that head brewer Jared âRedâ Proudfoot says will be âbig, malty and hoppyâ. By no means will this be a subtle beer; itâll come in at 7.1 per cent, uses several different malts and five different hops. It’s a hoptastic combination of Columbus, Centennial, Amarillio, Simcoe and Nelson Sauvin with Jared dry hopping at least three times during conditioning.

Justin Fox has been at the helm of Colonial Brewery since Easter and within a week of taking up the post was planning his GABS festival beer.

âWe wanted to take the opportunity to thank departing brewer Mal Secourable for his friendship and great work at the brewery over the years. When we noted his car park space is actually named ‘Gary the White’ the beer just sort of rolled on from there,“ says Justin.

The mysterious origins of Gary the White aside, the beer will be a white stout – creamy and warming with hints of coffee flavours yet light in colour.

âThe biggest challenge is to get some malt complexity into the beer without introducing any colour,â says Justin, âThe same goes for getting some roast/coffee flavours."

Duckstein head brewer Shannon Grigg is indulging a long held desire to brew a porter, something the Germanic constraints of the brewery hasnât allowed him to do before. But don’t be expecting a run of the mill porter, as Shannon has thrown in roasted coconut, vanilla bean and a small percentage of chocolate wheat.

The inspiration for the additions came from a mate who bought him a can of Maui Brewing CoCoNut Porter, brewing out of Hawaii. Coming in at about 6.5 per cent, Shannon still wants to keep the porter a little traditional by using East Kent Goldings hops, though is aiming for a slightly lower IBU so as not to overpower the coconut and vanilla.

In a bit of teamwork, or perhaps just showing off, Paul Wyman from Fremantleâs The Monk) and Nick dâEspeissis from Eagle Bay Brewery near Dunsborough, have collaborated to brew the âCacao Cabanaâ. Although you probably now have Barry Manilow singing Copacabana in your head, brewing this beer was serious business (photo above notwithstanding). Paul and his assistant, Jack, drove south to Eagle Bay Brewery for a weekend where they combined Paulâs idea for a chocolate banana hefeweizen with Nickâs recipe for a brown ale and experience in brewing with cacao husks. The result is a hefewezien with a big malt bill, English hops, low bitterness and over 17 kilos of Margaret River cacao husks.

Bootleg Brewery will leave their impression at GABS with their limited edition Oaked Amber Ale. Head brewer Michael Brookes has been playing with oak fermenting and oak aging his core range of beers and Tomâs Amber is the second to receive the woody treatment. 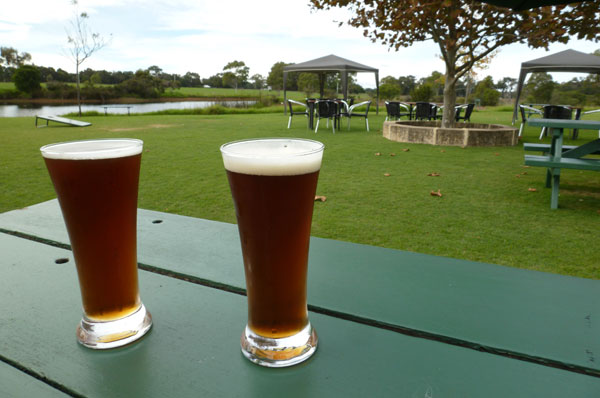 If you miss out on Bootlegâs Oaked Amber Ale at GABS you might be able to catch it at The Royston during Pint of Origin. Another widely anticipated Good Beer Week event, the Pint of Origin has seven pubs playing host to a tap takeover from each state or territory – with three regional venues pouring beers from all over Australia too.

Western Australiaâs host venue is the Royston in Richmond where the taps will be pouring beers from Broome to Margaret River. Four south west breweries will be participating amongst WA heavyweights such as Feral, Little Creatures and Nail Brewing.

Jeremy Good will be sending his award winning Cowaramup Pilsner at the request (or perhaps the demand) of the Royston. Cheeky Monkey Brewery have decided to send their flagship beer, the Hagenback Belgian IPA, while another flagship beer being shipped over is Eagle Bayâs Vienna Lager, with Nick selecting this to compliment the ale-laden line up. Bootleg will have their limited release Oaked Amber Ale along with dark ale favourite Raging Bull. Itâs a list thatâs sure to please both old and new fans of what is just a sample of the south west craft beer industry.