He’s only 26 but already Evan Hunter has made whisky at Lark Distillery (as pictured above) and brewed with Moo Brew and Seven Sheds. And now he’s set on opening his own brewpub – with your help. The Tasmanian plans to open a “nano brewpub” in Hobart and has his eyes set on a second hand, 200 litre Spiedel Braumeister as the first step along that road. There’s one slight hitch – he doesn’t have the $10,000 needed to buy it…

So he’s decided to put his fate in the hand of the beer-loving public and is seeking to raise the cash via crowd-funding website Pozible so he can bid for it when it goes on sale next month. All being well, he’ll reach his target, snap up the brewhouse and continue his search for suitable premises so that what sounds like being one of the more esoteric ranges of beer will be pouring over his bar in the second half of 2014.

“The catalyst was being without a brewing job,” says Evan. “I get itchy fingers and need to be creative. I looked at my situation: flat broke and with just the clothes on my back – and it seemed as good a time as any to launch my own brewing idea!

“The opportunity [to buy the Braumeister] was there and I had all these ideas in my head. I didn’t want to get 10 years down the track and think I should have pursued the opportunity when it came.”

Hence Pozible, via which people can post projects and seek donors, who can select from a range of financial contributions in return for different returns, in this case ranging from stickers at one end of the scale through to having your portrait painted and hung in the brewpub and a beer label designed in your likeness to appear on a beer you help brew. A friend successfully used Pozible to get a fashion project off the ground and suggested Evan give it a go too.

Should he be successful, the beers will come out under the Brew Nouveau label, both in keg and corked, wire cage bottles. They will also add colour to the Aussie brewing landscape while making full use of what Evan’s home state has to offer. Already recipes are being developed that include ingredients such as native pepper, green malted rye, coffee, sassafras, highland peat, organic oats, honey, and seasonal fruit. There are also plans for an oak cask maturation program featuring barrels from leading Tasmanian distilleries and wineries.

It’s in keeping with Evan’s past as both distiller and brewer. At Seven Sheds he combined the two, for example when he came up with the idea for Smokin' Bagpipes, the 100 per cent peated malt beer released around the same time as The Yeastie Boys' Rex Attitude with neither brewer being aware of the other’s deranged idea. 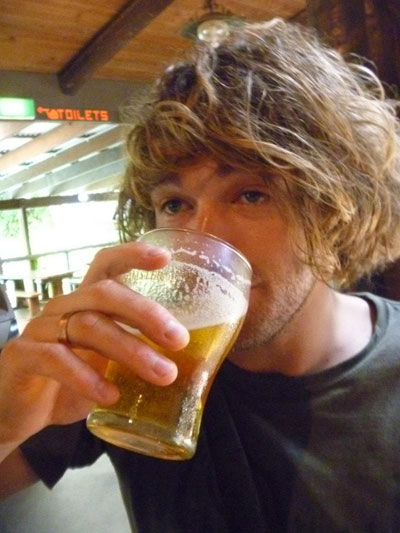 “I’ll be using open fermentation,” says Evan. “But I’m not putting too much into the public domain about my plans in case someone else picks the ideas up and runs with them. I do have an idea for a ginger and pepperberry ale as well as other ones I’ve played around with at other jobs. I’d like to do a peat smoked Imperial Stout as a seasonal release too.

“My specialty at Lark was producing heavily smoked whisky. We have access to our own peat reserves and there aren’t many places like that. My approach is all about taking advantage of what Tasmania has to offer – working with local producers who make products authentically.”

“It references the Art Nouveau movement of the late 19th century and early 20th century. That was all about creating art inspired by nature,” says Evan. “I want to create beers inspired by the Tasmanian environment.”

To prepare himself, after leaving his last brewing position he embarked on a “beer odyssey” up the East Coast.

“I met some wonderful people and went to as many breweries as I could,” he says. “The highlight was Bright Brewery and hanging out with [head brewer] Jon [Seltin]. It was fantastic. He invited us to stay at his house, gave us food and beer – we didn’t pay for anything!

“Another highlight was going to Murrayâs. It’s such a gorgeous spot up there and there was an Elvis impersonator entertaining people over lunch, which was a bit of a contrast to Mountain Goat on a Friday night in the middle of trendy Richmond!

“It was just calling in and meeting people and drinking good beer, but I ended up working at Stone & Wood for a few weeks on their never-ending production line before coming back to Tasmania at the end of March.”

Should his dream come true it will be on a slightly different scale to the Byron Bay operation, with the intention to brew around 750 litres a week. If you’d like to see him achieve it, you can find out more and make a donation (starting at $10) here.