Top Of The Class

There’s a line in the Sh!t Beer Geeks Say! video in which one of the drinkers parodies the uber-exclusivity of some craft beers today.

“This is a really limited release,” he says. “You can’t have one though: they only brewed a pint.”

And, while the brewers of 10/10 Imperial Stout (pronounced “ten out of ten”) created rather more than a pint, it may well be the most “exclusive” beer ever to have taken home a major prize at one of Australia’s top beer awards.

The beer, which has just been named Champion Exhibit, Champion South Australian Exhibit, Champion Small Brewery Exhibit and Champion Stout at the Royal Adelaide Beer Show was brewed by students at the Campus Brewery on TAFE SA’s Regency Campus and is only available to buy at one place: the onsite Regency Results Cafe. What’s more, the ten different malts, ten different hops, ten per cent ABV concoction was conceived by a Canadian lab technician from Molson’s who was on a six-month exchange at university in Adelaide and is now back in Canada unaware of her triumph.

“She was looking for a project as part of her university subject,” says brewing consultant and brewing lecturer Stephen Nelsen (pictured above right). “She and a couple of classmates and other students on the TAFE course did the hands on brewing.”

The story of the beer that beat all-comers – more than 100 of them from breweries across South Australia plus a handful from WA and New South Wales – gets even more unlikely when it comes to the recipe construction. While the student had a good idea of what she wanted to brew, Stephen also saw the opportunity for a little tidying of resources in the brewery. There were a few bag ends of various malts and hops so they decided to use ten of each in the brew, which in itself led to the academically-inspired name.

Yet despite this one-off brew having such an unusual provenance, Stephen found himself doing multiple tours of the stage when the awards night for the third Royal Adelaide Beer Show rolled around.

“We go to the International Beer Awards in Melbourne and this one,” says Stephen. “We generally rate bronze and silver, and hadn’t scored gold yet in the four or five years we’d been entering. We are still getting bronzes and silvers for the other beers, which says that they are of a satisfactory level. Then we came in with this one beer that’s a one-off â we brewed just one pallet in one batch â and it was one of very few Imperial Stouts judged on the day.

“I’ve been in the industry for 15 years now with various brewing companies so I’m personally known. People at the awards were congratulating me, which felt a bit weird. I’ve never done so many laps of the podium!”

Other winners on the night included BrewBoys for their Seeing Double Ale, which took out the Champion Ale and Celebrity Choice titles, McLaren Vale who won Champion Lager for their Vale Dark Lager and Perthâs Generous Squire Brewery, who won Champion Reduced Alcohol Beer for Shaftoâs Reward. Last yearâs Champion Exhibit winners, Goodieson Brewery, of McLaren Vale, won the Champion Wheat Beer trophy, while Coopers were named Champion Large Brewery Exhibit for their Best Extra Stout. The winners were selected from a record field of 104, up from 87 last year and 60 in the awards' inaugural outing in 2011.

The idea to install a commercial standard brewery at TAFE SA arose in 2005, with the six hectolitre, three vessel DME system up and running in July 2008. Since then, a range of five regular beers has been developed under the Campus Brewery brand – lager, pilsner, summer ale, pale and stout – all, again, only available from the onsite cafe for $18 a six-pack. 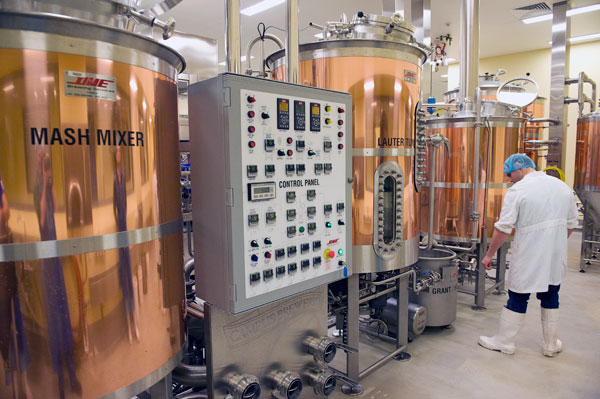 A student at work on the brewery

While there is no formal brewing course at the TAFE, the facility is used for a wide range of purposes. It is used for practical learning for students as part of their wider Food Technology courses, by students from various Adelaide University courses, and by home brewers or craft brewers on one of Stephen’s short courses. Stephen also spends much of his time training staff from Coopers.

The brewery is part of a wider hospitality school at the Regency Park campus, a centre of excellence that attracts large numbers of visitors and tourists.

“People come to see the high-quality training facilities,” explains Stephen. “We have tour groups who come to see the cordon bleu cooking school, the patisserie, the artisan cheese academy and the training restaurants.”

In fact, the brewing school has often lived in the shadow of many of the other centres of excellence. But, perhaps, not any more…

“Emails are still doing the rounds,” says Stephen. “We’re selling 11 cartons a day through Results! Everybody has rung me, when normally a part-time lecturer would never come into contact with anyone above their line manager.

“The day after the awards, the CEO of TAFE was making appointments to come in â it’s very very big here.”

And he’s not just talking about the ABV.

“The reason it scored so well is that it truly reflects the expectations laid down in US BA style guidelines for ‘Imperial Stout’. It may not be the strongest beer, or even to your liking, but it conforms to the specifications of the category entered in the competition. Itâs not as hoppy as an American Imperial Stout, and not as oily and resinous as some Russian Imperial Stouts. After all the massive flavours, it actually has a good balance of malt sweetness and hop flavours.

If you’d like to try the beer for yourself, you need to move fast and get yourself to the Regency Results Cafe as they’re not allowed to sell beer anywhere else. The 10/10 sells for $20 a six-pack, which must make it the best value 10 per cent, trophy-winning Imperial Stout in history!