Ask Brewer Jayne: Getting into the brewing industry

Way back in the distant mists of time (well, June), we announced that Jayne Lewis, co-founder of Two Birds Brewing, was joining The Crafty Pint as an occasional “agony aunt” for beer. She would take questions on anything beer and brewing-related, delve into her vast experience as a brewer, winemaker, beer judge, small business owner and so on to provide insight.

Given she’s a rather busy sort (these parties won’t happen by themselves, you know…!) and we’re too polite to hassle too much, it’s taken a little while for her to get around to answering the first of the questions. Little wonder the Birds are looking for a little help…

Anyway, here she is with the first Ask Brewer Jayne column. Better still, she’ll be back with part two on Friday. Don’t forget, if you’ve got anything you’d like to know – anything ale-y that ails you – send your queries to crafty@craftypint.com and we’ll get her on the case.

Question
Hello! Massive fan of your beers. I tried both your Golden Ale and the other dark beer (unsure which style it was) at Section 8 during Good Beer Week.

I’m a beer lover and amateur home brewer, I currently work full time in the liquor industry but I want to go into the craft beer world of work. Working as a brewer or at a brewery is the dream I want to chase.

How would I go about starting a career? Basically, where do I go from stage one, and what requirements or skills do I need?

I appreciate your time, thank you.
make beer not war. 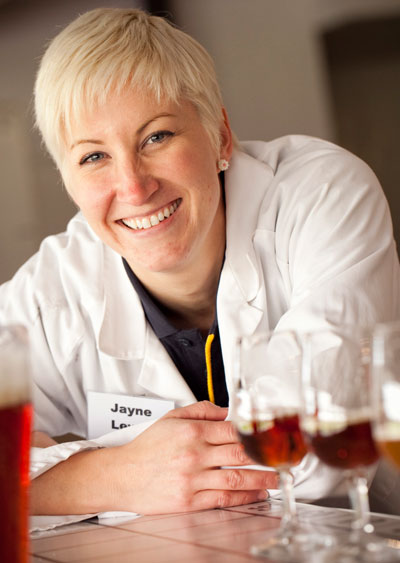 This is one of the questions that I get asked most frequently, and I’m always keen to make sure that people are under no illusions of what being a brewer is all about. It appears to be a glamourous job, but in reality it involves early starts, long hours doing hard, physical work (see above) and some late nights out and about talking about beer! The old adage: “We work hard and we play hard” is particularly true in this industry.

As a brewer, there are a lot of mind-numbing tasks, like brewing Pale Ale for the tenth day in a row, watching bottles clink past on a bottling line for eight hours a day and the never-ending cycle of cleaning. Having said that, sitting at the bar at the end of a shift and being able to drink something that you had a hand in making, is extremely rewarding.

Also, the brewing industry is incredibly warm and welcoming, and is full of some of the greatest people that you’re likely to meet. Personally, I adore what I do and sometimes I need to pinch myself, as I make a living out of making beer!

There are a lot of people applying to work in breweries, so you need something to set you apart. You need to be physically fit, and a background in Science or Engineering can be helpful. I highly recommend starting a Brewing qualification, to give you a greater technical understanding of the brewing process and it will also help to set you apart when it comes to finding a job. The University of Ballarat and The Institute of Brewing and Distilling in the UK, offer a range of courses externally at different levels, and are both worth a look.

I also recommend getting actively involved in beer-based activities and getting to know the brewers. This also extends to social media, so get on Twitter, Instagram or Facebook and start up a conversation, we’re a pretty friendly bunch! A brewery will be more likely to hire you if you have demonstrated a passion for the industry.

Volunteering to work at a brewery often seems like a good way to gain experience, but unfortunately this often isn’t possible, as volunteers are not covered by Workers Compensation. If you are studying, you may be covered by your educational institution’s Insurance Policy, so that might be worth checking out.

In short, demonstrate a passion for beer, show that you’re not afraid of hard work, seek out some knowledge and you’re on the right track! All the best with it!

Thanks, Jayne. She’ll be back on Friday with some guidance for Crafty on judging big beers in advance of our mammoth Imperial Stout Blind Tasting Panel this weekend…