The most anticipated Blind Tasting yet in the short history of Crafty Pint Blind Tastings did not disappoint. Over several hours on Saturday, some of the biggest, blackest, boldest and booziest beers ever brewed in Australia were served up in flights of three to an eager tasting panel, producing the mostly tightly packed field yet at the top and the usual interesting results.

We had managed to lay our hands on pretty much every Australian-brewed Imperial Stout in bottle (although a last minute attempt to add Forrest’s Block Splitter was thwarted by a delayed delivery) and snuck a few renowned international beers onto the lineup for comparison too. Unlike previous tastings, there were more beers that were sourced direct from the breweries rather than bought via retail, given some can be hard to source. And there were a couple of beers that appeared in more than one vintage, which in itself proved eye-opening; in both cases where there were multiple vintages, the older beer scored higher – almost unanimously across the panel – suggesting that a bit of age does such beers no harm.

For the most part, the format remained the same as previous panels:

There were a couple of changes too. For a start, there was a huge amount of mild cheese, water and bread in multiple formats to help keep palates in condition and we took a break after three flights to ensure all the beers were given a fair go and there wasn’t palate fatigue. Given there was no weighting towards beers tasted early or late on at either end of the results table, it would seem this worked. What’s more, two vintages of one beer presented early and very late recorded almost identical scores.

The only other change was the debut of a new panelist. We welcomed an ARIA-winning homebrewer onto the panel (well, they do say music and beer goes well together) who proved his worth by stating forthrightly on two occasions that he knew what a beer was after one sniff and was correct both times. His Russian Imperial Stout that we tried afterwards wasn’t bad either. Also worth noting is that, given how many “straight” Imperial Stouts we were able to source, we left out any with quirks, such as Belgian yeasts.

Anyway, on with the results…

Well, if it was good enough for Catherine the Great, then it’s good enough for The Crafty Pint. Courage Russian Imperial Stout, which in its earliest form was sent to her court in Russia and was more recently brought out of retirement in 2011, after brewing had ceased in 1982, took out top spot.

That said, it was a close run thing, with the original Clout Stout from Nail Brewing (the 2010 vintage) likely to have pipped it were it not for a lack of head retention. Both beers had the panel cooing; one described the Courage as “Beautiful, absolutely perfect Imperial Stout for me!” in his notes; another reckoned the Clout “smells exactly how I imagine an Imperial Stout should smell.” It would seem that anyone with Clout 2011 or 2012 in their collection will be in for a treat with a little more age on them.

The Best Stout at the 2013 Australian International Beer Awards, Mornington Peninsula’s Imperial Stout, followed that pair, with the gold medal-winning 2011 Hargreaves RIS next, closely followed by a tie between its 2012 sibling and Feral’s 2013 Best Porter, the Boris Imperial Stout. Amazingly, although perhaps unsurprisingly given the quality of the field, little more than two points (out of 25) covered beers three to 12, with Red Duck and Moo* close behind.

At the other end, Thornbridge and Sail & Anchor’s Jacktar suffered for being too light. Tasting notes suggest most found them decent and drinkable beers, but both failed to meet the style guidelines so were penalised accordingly. Meanwhile, the BrewDog / Mikkeller / Nogne O Black Tokyo Horizon was a sweet, hot booze fest that failed to find favour.

*NB: Originally, we planned to exclude all barrel-aged stouts as well as those with Belgian yeasts, then relented at the final hour and included Moo Brew Vintage Stout 2012. However, it hasn’t been included in the results as its time in oak meant it was marked down and would have been better suited to a lineup of barrel-aged beers. For the record, it placed between The Ox and 10/10 even with the marking down for being out of style. 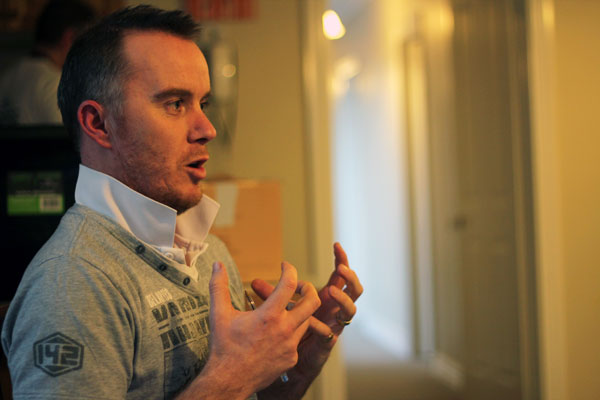 Hargreaves Hill (now Temple) brewer and beer judge Glenn, who created their RIS, talks through the style before the panel commences.

“They’re all pretty dark, but this one is formidable! We’re only on the third flight but… Wow! Jesus!”

“I’ve forgotten I’m supposed to mark them. I’m just going back and forth across the flight going, ‘This is awesome!’.”

“I don’t know how to score this one. I feel it should just have a line through it.”

Panelist 1: “It’s like rendered down molasses. It’s making my head feel warm."
Panelist 2: "You could warm your hands on my face. It’s like the radiator effect…”

“It’s tooth rotting, that is.”

Panelist forgetting Crafty Towers is for drinking and writing, not brewing: “If you did a graph on that you would be looking at 1040. Have you got a hydrometer here?”

“I initially scored that quite high. Then I drank it…”