Here at The Crafty Pint, we’re not afraid of doing things arse about face. Avid followers will be aware that we usually preface each of our Blind Tasting Panels with an article by resident Beer Scholar Chris Brady. However, prior to the last one, he was busy moving house with young family in tow, having started work as a brewer at Holgate, so we accepted his extenuating circumstances note and moved on.

Still, even with the epic tasting in the bag, Chris continued to plunder the history books to create yet another of his amusing yet highly informative features that confirmed that the beer which came out on top in our Blind Tasting was indeed the direct descendant of the very first Russian Imperial Stout.

He also alighted upon such wonders as Peter the Great’s Beard Tax and the disappointing news that, contrary to popular myth, Catherine the Great died without taking pleasure from (or indeed given pleasure to) even a single horse. Such illuminations ended up on the cutting room floor but what remains is a wonderfully colourful trip into beer’s dark past.

You might think it's cold in Russia, but 18th century Russia was colder still: no central heating.

The Soviet Union, on reflection, had a colder… vibe, but that was a different brand of cold.

So, anyway, it's the 18th century, it’s Russia and it’s bloody cold. Mournful clouds gather above. The wind has a way of knifing through the thickest of overcoats, the wooliest of undies. There'll be more snow before nightfall.

You think that's cold? In winter it gets even colder. Just about the only way to get warm is to run away from a pack of wolves.

Imperial stout, or imperial Russian stout / Russian imperial stout as it is often called, is a product of the 18th century. The regal name relates to the rather astonishing fact that a strong version of porter, a drink of the working classes, came to be prized by Empress Catherine the Great of Russia.

In the London of the 1700s, porter, which was often brown rather than black, was the drink of the masses. It was made from fire-kilned brown malts that would have imparted a smokey character. The finished beer enjoyed a period of quiet maturation in wooden vats and it is highly likely that these storage vessels would have harboured colonies of wild microflora which would have given a funky edge to the flavour. All this made for a beer that at one time would have befuddled modern palates, yet somehow the idea of a barrel-aged 10 per cent stout inoculated with Lactobacillus and Brettanomyces doesn't seem all that strange anymore…

Different grades of porter were available with the strongest brews fetching a higher price. These strong beers were described as being stout, though this had nothing to do with colour or style: stout simply meant strong. Stout porters grew in popularity, the name was truncated, et voila… stout was born.

The stoutest of stouts were exported, with trade to the Baltic states particularly lucrative. That Catherine the Great herself had developed a taste for strong English stout could only have helped sales in Russia.

The marketability of the imperial connection was not lost on the brewing community and inevitably the beer came to be called Imperial Russian Stout. Exactly why the humble brown porter morphed from being a labourer's slurper to courtly sipper is a matter of some conjecture. It has be argued that the beer needed to be very alcoholic so as to prevent it from freezing on the long sea voyage. Almost certainly the preservative qualities of alcohol and hops made for a beer that travelled well but the real reason may be more prosaic: there was a market for it.

The 18th century was the golden age of porter and huge quantities of English stout porter were imported into Russia. However, the seeds of the beer's popularity with Mother Russia may well have been sown even earlier, during the reign of Emperor Peter the Great. In the late 17th century, Peter undertook a tour of Europe. Whilst visiting England he developed a taste for the local beers and an export market was born.

There were several breweries that took advantage of the lucrative Baltic trade but the prime candidate for the original imperial stout was a beer brewed on the banks of the Thames by a Mr Henry Thrale and his Anchor Brewery. In the late 18th century, the Anchor Brewery was famed for its porter, Thrale's Intire ("entire" being a common name for porter at the time). A contemporary source, the zippily titled The History and Antiquities of the Parish of St Saviour's, Southwark, co-authored by Messrs Matthew Cocanen and Aaron Morgan, has this to say:

“…Thrale's intire is well known, as a delicious beverage, from the frozen regions of Russia to the burning sands of Bengal and Sumatra. The empress of all Russia, is, indeed, so partial to porter, that she has ordered repeatedly very large quantities for her own drinking, and that of her court. It refreshes the brave soldiers who are fighting battles of their country in Germany, and animates with new ardour and activity the colonists of Sierra Leone and Botany Bay. It is not only evident from the exportation of other articles, but likewise from the quantity of Porter sent abroad, that Thrale's intire extends the reputation of British produce to the most remote quarters of the globe.”

In April of 1781, Henry Thrale died and his widow sold the brewery to a consortium of interests which included a banker, David Barclay (whose family gave their name to the British financial institution, Barclays Bank). Barclay, Perkins and Co continued to brew and export the strong porter, but it was now called Barclays Imperial Brown Stout.

It wasn't until the early 20th century that Barclay's began marketing the beer as Russian Imperial Stout, with advertisements proclaiming: “As brewed for the Tsars of Russia” – presumably to cash in on the courtly connection despite the fact that any trade with Russia had been brought to a grinding halt by World War I.

By 1955, Barclay, Perkins and Co had merged with local rivals, Courage, who continued the tradition of produced a Russian Imperial Stout. The 1970s saw a slight name change with their RIS becoming IRS and it is under this name that it was produced in dwindling quantities until it finally went the way of the the Russian royalty (minus the bloodshed) in the 1990s. A little piece of history was seemingly lost forever.

Thankfully, the story of the original imperial stout, the beer that can trace its lineage all the way back to Thrale's Intire, is not yet finished. In 2007, the Courage brands were bought by Wells and Young's and in 2011 Courage Imperial Russian Stout was revived. This was initially in response to intense interest from the US market and has since gone on to become an annual brew.

In a neat little twist, the head brewer responsible for bringing back the Courage Imperial Russian Stout, Jim Robertson, is a former Courage brewer who used to brew Courage IRS at the old Courage brewery (confusingly called the Anchor Brewhouse), also in Southwark, London, nearby the original Anchor Brewery.

As with many historical beer styles, the modern wave of craft brewing has been at the vanguard of preservation through reinterpretation, with many putting their own unique spin on this much revered classic.

Broadly speaking, there are now two variants: British and American. Predictably, the American style leans to the hoppier, roastier end of the scale and the English can have a slightly softer, maltier profile along with the typically fruity English yeast character. Then, of course, there are the beers that defy classification such as Murray's Auld Bulgin' Boysterous Bicep, brewed in collaboration with The Crafty Pint obviously and featuring peated distilling malt, mussels, oysters and a Trappist yeast.

The best modern imperial stouts are rich and decadent with bags of chocolate, coffee, dark fruit and liquorice flavours all melding into a delicious whole. There is going to be some alcohol warmth in a beer this strong (anywhere between 8 and 12 per cent), but the alcohol should never be hot and solvent like.

If all that sounds a bit, er, black, well cheer up and drink one. It's a boozy liquid dessert that's perfect for enjoying in front of a roaring fire. Hold your glass up to the flames. Can you see your fingers through the glass? No? Good. Now drink up, the wolves are baying.

We'll then be reconvening for a second public version of the tasting at Tallboy & Moose soon after. 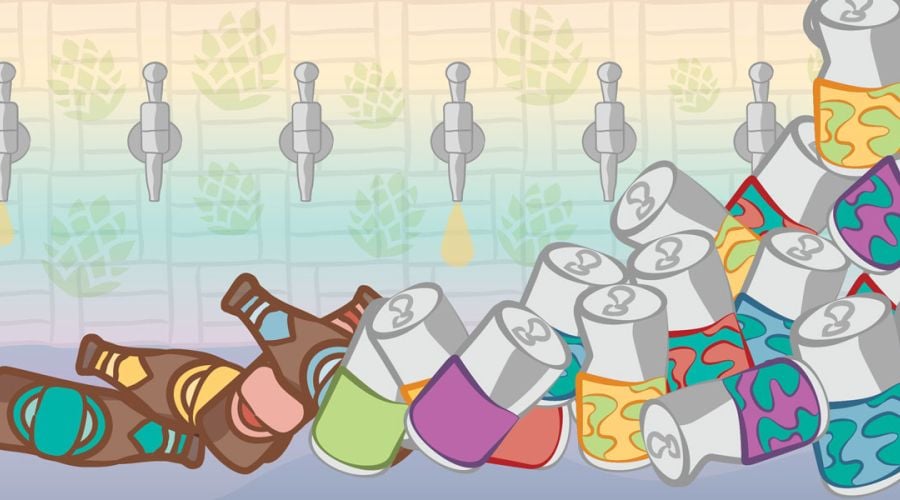 Styles have come and gone, limited releases are a growing focus, and there's never been more choice for drinkers. Here, we look at just how far and fast tastes have changed since we launched The Crafty Pint. read on