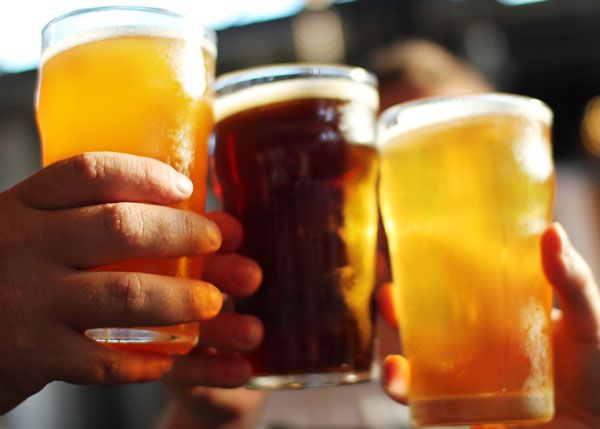 How would you like the chance to live, work and play with one of Australia’s best craft breweries? What if you could hang out with two of the country’s top brewers while they covered all accommodation and travel costs too? We can all agree that that would be pretty sweet.

What if you also got to fly to Hamilton and live, work and play with one of the fastest rising stars of the Kiwi craft beer scene? And let’s say, just for the sake of it, you also got to jump on a plane to China to work at a brewery there. And then one in London. And another in the USA.

It certainly is. And it can indeed be yours if you’re successful in the World’s Best Beer Trip competition that launches today.

The winner gets an all expenses paid, around-the-world trip to brew and party with Sydney’s 4 Pines, WA champs Feral, Good George in New Zealand, The Brew in Shanghai, Meantime in London and Victory in Pennsylvania. They’ll spend three or four days with each, with the schedule catered to their preferences.

“We’ve never heard of a prize as elaborate as this in craft brewing,” says arch-instigator Jaron Mitchell of 4 Pines. “A bunch of small brewers getting together and pooling their resources – it’s awesome to be able to put something like this on.”

To be in with a chance of winning, all you have to do is post a photo via Instagram to the competition website (with appropriate hashtags and brewery names) and in 50 words explain why you should be the winner. Like Miss Universe for beer lovers, each participating brewery will select their favourite on October 8, with those six regional winners being showcased on the site so the publicÂ can vote on the winner. It’s pretty simple, but be aware that the competition is open to anyone, anywhere – not just Aussies.

The idea was originally conceived by Jaron and was initially on a much smaller scale, involving one or two breweries. He got chatting about it to Brian Watson from Good George in Hamilton, New Zealand, who in turn got chatting to the Feral team while working on their new brewery, and from there it kept on growing until it became the ridiculously good thing it is today.

The six participating brewers are all chipping in to cover the costs and are happy to let the winner set their own agenda.

“It’s one of those trips that if you are right into getting involved then you can jump on the bottling line at the brewery,” says Jaron. “But if you’re bag is to lay down under a large vat, turn the tap on and drink a load of beer then spent the next four days on the beach, that’s OK too.

“I really anticipate that there will be so many entries and that the right participant’s personality will shine through their photo and 50 words.”

He says that “creativity and humour will be celebrated” and that he expects people to “think hard about their entries”.

“We want to make it a no holds barred competition. We just want to see the breadth of what the question means to people rather than confining them in a little box.”

Steve Finney, from Feral, sees it as even more than that. He sees it as chance “to help save the human race from such beer promotions as âwin a capâ or âdrink four flavourless dry beers to win a boom box eskyâ.

“Deep down I think we all knew that the next social network blockbuster sequel was going to somehow involve a worldwide network of craft breweries, Facebook, Twitter, Instagram and a God-like being that will be sent around the world to record, drink and eat to save humanity from boring, flavourless and bland beer. But it is true and Judgement Day is coming.â

To be in with a chance of winning, get thinking, snapping and head here. Entries close on October 8, 2013.