How Beer Is Made

Beer: in essence just water, grain and yeast â usually with a bunch of hops added â yet capable of being tailored into all manner of weird and wonderful concoctions. With a history stretching back thousands of years, itâs both a drink to enjoy with mates and something thatâs played an important role in the development of civilisations.

In the first in a series of features from Australiaâs craft beer experts Ian Morgan, from the Holgate Brewhouse, in Woodend, Victoria, takes you on a magical mystery tour into âHow Beer Is Madeâ. Part one takes in the basics and the start of the brewing process. Part two will follow, picking up with the boil through to the all important drinking.

Take it away, Ian…

Since youâre stopping in at The Crafty Pint, youâre probably a beer lover with a cultivated palate. But have you ever wondered how beer is made? Itâs a deceptively simple process.

Bake one loaf of bread, preferably with honey. Immerse in an open clay pot full of water. Leave outside until foam forms on surface. Once bubbling stops, skim off foam and drain liquid into your favourite drinking vessel. Enjoy!

That’s probably how beer was discovered by some desperately thirsty fellow in the cradle of civilisation. And by 1900 BC the process had been formalised to the extent that it was recorded by the Sumerians in their hymn to Ninkasi, first of many goddesses, gods, and patron saints of brewing.

Today, the art of brewing still boils down to this same magical process of turning water, grain, and yeast into a delightful drink, but three thousand years of technological, scientific, and aesthetic progress have lent it layers of complexity.

Brewing starts with water. Although some might justifiably scoff at industrial âmacro-brewsâ as tasting watered down, even your favourite oak-aged imperial coffee-infused double-hopped triple stout is at least 90% water. So if your significant other gives you a hard time about heading down to the pub for a pint, just let him or her know that youâre simply conscious of the need to stay hydrated.

Water isnât just water, though. Depending on where you live and whether your water is drawn from deep underground or comes from surface water it will contain a lively mix of different minerals and organic material (all those ducks have to go somewhere). In the past the composition of the local water has had a strong bearing on the type of beer that was brewed. The subtle flavours of a Czech pilsner wouldnât be attainable without the soft water â low in mineral content – available to the brewers of Plzen. The hearty black stouts of Dublin would be unbearably acrid if it werenât for the high levels of calcium carbonate (chalk) in their water. The classic pale ales of Burton-on-Trent wouldnât have their hop kick without the dose of calcium sulphate (i.e. gypsum) in local aquifers.

Fortunately for modern brewers (and modern drinkers), chemistry and technology has advanced to the point where water can be treated so that the resulting water is appropriate to the beer. Since itâs easier to add things to water than remove them, youâll still find many brewing centres close to abundant sources of good water.

You only love me for my enzymes

Before we get into the brewing process, we should cover the next key ingredient in brewing â malt. Beer is defined by the fact that it’s an alcoholic beverage produced from grain, as opposed to fruit (wine) or honey (mead). Any grain can be used: rice, rye, wheat, oats and corn are all used in various beer styles. Barley is most widely used since it is a relatively cheap, easy, and hardy plant to grow, because it contains the enzymes necessary for the brewing process, and because it has a husk. More on that shortly.

The barley needs to be malted before it can be used in brewing. This process is performed at a maltings and the malt is then purchased by breweries. The maltster soaks the barley in water until it prepares to sprout, then dries it to stop that from happening. As a result the barley begins to generate enzymes that will convert its starch reserves into more easily consumed sugars that the barley would use for growing into a nice, tall stalk. Instead, those sugars will be used to make beer, which I think is best for all concerned.

As an additional step, the maltster might roast the malt to varying degrees. These roasted malts can be used to lend different flavours and colours to the beer. Most beers will be made up mostly of a basic pale malt, with roasted malts or other grains (wheat malt, rye malt, etc.) added in smaller amounts depending on the recipe. For example, the malt bill for a dark stout might consist of 86% pale malt and only 14% dark roasted malt. 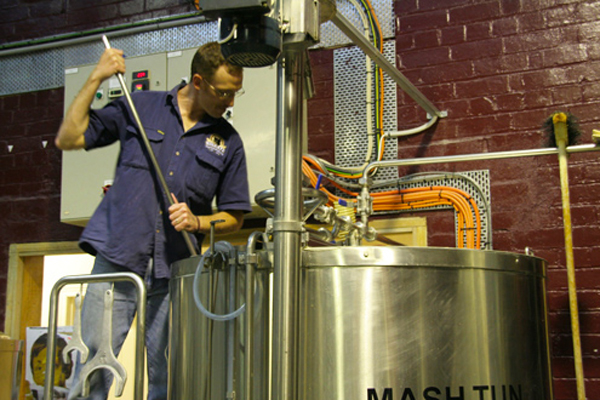 Ian prays to Ninkasi at the Holgate Brewhouse

We begin the brewing process with water and malt. The brewery will have a hot water tank, often known as a âhot liquor tankâ due to brewersâ inclination towards obscure and archaic jargon. Before the brew can begin, we need to have water heated to about 75C or so.

The brewery will also have a âmash tunâ and a âlauter tunâ â often the same vessel, hence a âmash/lauter tunâ. This is where we’ll combine the malt and the hot water into a sort of porridge known as the âmashâ. The malt needs to be crushed in a mill before being mixed with the water. The malt is crushed and not ground to a fine powder because weâll need the husks to act as a filtration bed later. Milling ensures that the hot water can get to those starches and sugars that are encapsulated in the malted barley grain.

The mash will be allowed to ârestâ at a temperature of around 66C for 45 minutes or so. During this time the enzymes in the barley continue the job of breaking down starch into sugar. Once this conversion is complete, the brewer can start drawing off the resulting liquid, known as âwortâ. Wort is essentially sugar water. If youâve ever tasted a Malteser candy, you get an idea of that malt sweetness.

The lauter tun has a screen that prevents the grains from pouring out with the wort, but the majority of the filtration is carried out by the grain husks. This draining off, known as the âlauterâ, has to be conducted very carefully so that the mash doesnât become compacted. We want the maximum amount of diffusion of hot water through the crushed barley so that we get as much of those sugars as possible.

So that gives us the base from which the beer will be created. Next up: the boil, coming in part two of “How Beer Is Made”.