Votes are pouring in for this year’s Hottest 100 Aussie Craft Beers poll – and choosing just five does appear to be proving tricky. One friend of Crafty restricted himself to beers he’d tasted for the first time in 2010 and, apparently: “It’s still bloody hard”.

So, for the purposes of sparking debate – and perhaps jogging a few memories – here’s the second in a series of picks from some of the country’s top craft brewers. This time it’s the Mountain Goat brewery team stepping up to the plate, with their top five beers for the third running of the annual poll launched by The Local Taphouse in 2008.

His top five (in no particular order) 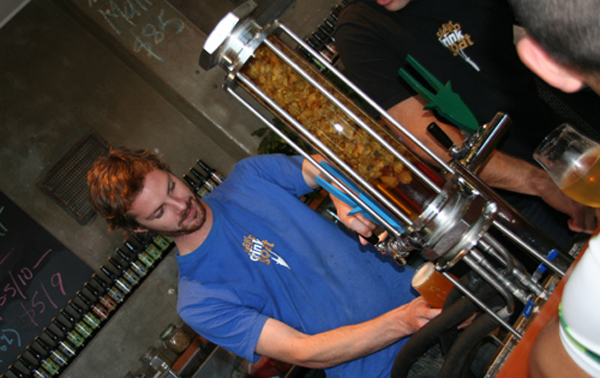 Naz and Randy the Hopinator

Murray’s Heart of Darkness.
Hargreaves Hill ESB.
Feral Hop Hog.
Red Hill Weizenbock.
Carlton Draught – 2010 AFL Premiers Special Edition (Packaging Only). (PLEASE NOTE: This is not eligible for the vote. Only commercially available Australian beer brewed by anyone other than Fosterâs or Tooheyâs main operations is eligible (so Matilda Bay and James Squire are OK). However, Naz is a Pies fan – nuff said…!)

Some pretty special beers there from breweries found all over Australia. Will any of them make your top five? Or do you need to hunt some of them down for a second opinion? Many can be found on the SPECIALS page if you need your memory jogged. And don’t forget – we’re not letting brewers vote for their own for the purposes of these articles (although they can in the actual vote).

If you’ve made up your mind, head here to cast your votes. And remember, one lucky voter will be picked at random to win five cases of top Aussie craft beer when the results are announced on Australia Day 2011.