It's not every Sunday that you get to sit down and talk to a pair of monkeys but that's exactly what happened a couple of weeks ago. Alex Poulsen and Ross Terlick are the two new brewers at Cheeky Monkey, the brewery and cidery in Caves Road in Margaret River. They have taken over the reins from former head brewer Jared Proudfoot as the brewery celebrates 18 months in operation.

Like many brewers, Alex's beer journey began with some home brewing whilst studying at university. Realising his chosen science degree was likely to lead to a career of eight hour days trapped inside a laboratory, Alex sent off resumes to breweries instead and soon found himself on the packing line at Little Creatures where, one fateful day, one of the brewers was off sick and he was asked if he wanted to take on a few night shifts. A few night shifts turned into three years, before he took up on an offer to work at Ãgir Bryggeri Brewery in Norway.

After a year in Norway, Alex returned to WA and was eager to get back into brewing, joining Cheeky Monkey as head brewer in September.

"It's a great opportunity because it"s all about us; in other jobs it's been other people who are the driving force behind the decisions. Here it's like, 'Go ahead and brew what you want to brew'," he says, smiling before adding: "We just have to make sure it sells!"

Taking on the role of assistant brewer is Ross Terlick, who previously hails from Cowaramup, another local favourite, where he worked as bar manager. After starting at Cowaramup Brewing, Ross quickly developed a love for craft beer, something he attributes strongly to the influence and contagious passion of head brewer Jeremy Good. Ross' own enthusiasm and knowledge for beer continued to grow, acknowledged by Beer & Brewer Magazine when he was awarded Beertender of the Year in 2012.

"On my days off I'd always come here [Cheeky] or Eagle Bay Brewery, so when the job came up I just couldnât say no to the opportunity." 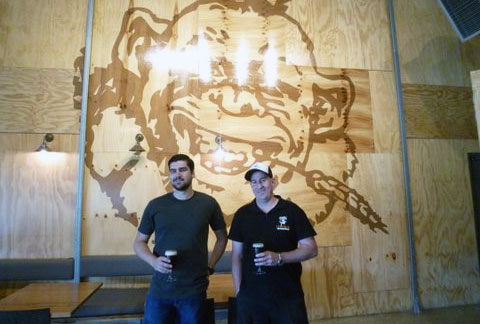 The Monkeys: Alex (left) and Ross

Even though they've only worked together for a couple of weeks it's easy to see that Alex and Ross will make a great partnership. They are both passionate, share a love of hop driven beers, agree on the importance of beer education and want to get people excited about beer. There won't be any fights over what music to play in the brewhouse either, something which both men agree is very important.

"A good test [of a working partnership] is music,“ says Alex. "That always helps and thankfully we have very similar taste in music.”

The core range of Cheeky Monkey beers won't be changing, as "they're all pretty wicked beers" according to Alex. But, as you'd expect, both brewers are bursting with ideas for Cheeky Monkey's seasonal release range.

Alex's first impulse is a breakfast stout – "I love Founders Breakfast Stout, I think it's amazing, so I'd like to do an Australian version with local coffee." – but admits perhaps it's not the ideal beer for the peak of a sandgroper summer. So while that idea sits on the back burner, Alex has a tripel currently finishing fermentation.

“It's got a Belgian base and then a lot of Australian hops like Vic Secret and Summer in the late kettle so you get that tripel slight sweetness followed by a passionfruit, stone fruit sort of thing," he says. At more than 7 per cent ABV it will be aptly named Tripel Threat and Alex hopes it will be pouring at the brewery by Christmas.

Also in the near future – and great news for beer lovers in Perth – Cheeky Monkey will be seeking to get more of their beer, including kegs, into bars and bottleshops.

"We have just started distribution with MGM [wine distributers] so the first shipment goes out next week," says Alex. And although Cheeky Monkey beers represent MGM's first and only beers in their portfolio Alex is confident in the passion and enthusiasm they've shown for his brews.

"The idea will be to have the core range in bottles all year around,“ he says, before throwing out a little teaser. "And then maybe some seasonals… We'll see."

Oh Alex, you cheeky monkey you.

Pia Poynton is the beer-lovin lady behind the girl+beer blog.