“We’ve talked the talk. Now it’s time to walk the walk,” says Jade Flavell as we discuss plans for her forthcoming brewery. It’s a fair point. When any brewery opens people will have high hopes and expectations for its beers. But when the brewery in question is being opened by the owners of what is regarded by many of the best-travelled beer people in (and outside) Australia as the best beer bar in the country, there’s an added pressure.

Happily, when the team at The Wheaty finally puts the first brew through its 600 litre system later this year, they’re not going to be short on mentors. Within days, the Adelaide pub will welcome a host of guest brewers for Good Beer Wheaty, their spin-off from Melbourne’s Good Beer Week. That means some of the very first brews through the system will be created by the likes of the Yeastie Boys (“our house brewers”), Magic Rock (UK), Sixpoint (NYC), Birra del Borgo (Italy) and To-Ãl (Denmark) and a host of locals, often in collaboration with each other. Given past collaborations on their pilot brew have included My Anchovia (featuring first wort anchovy-ing and dry anchovy-ing) with Birra del Borgo – a beer that may see the light of day as a full scale brew between the Italians and Dogfish Head – expect the unexpected.

“I aged about ten years in ten days,” recalls Jade (pictured above with her new hopback). “We only had time to put a couple of trial batches through our pilot brewery before Leo [di Vicenzo of Birra del Borgo] arrived to brew My Anchovia. "I had to learn how to brew on a system I’d had for ten days for a live brew in the Tin Shed [their gig venue], but the beer was really well received.”

The new brewery from Premier Stainless Systems is being built on a small plot next to the Tin Shed, where there is just enough room for the brewhouse, three fermenters and the aforementioned hopback – unsurprisingly not that much smaller than the kettle given the owners' love of hops. All beers will be kegged for sale over the bar at the same price as other local brews, while there are also plans for lots of ageing, three-way pours over the bar featuring their handpump and Glasshopper, and even a separate room in their storage warehouse across the road for the development of sours.

When the brewery produces its first beer, The Wheaty will be turning 11. Yet even when it was first opened in its current guise in 2003, the intention always was to add a brewery. That said, there was always talk of a kitchen too, but now food trucks have put paid to that.

“I used to home brew before we took over here,” says Jade, who will head up the Wheaty Brew Corp. She says she’s comfortable with recipe formulation and will be seeking expert guidance mostly on the process side, where everyone from Al at Lobethal Bierhaus to Jayne from Two Birds, Dave from Mountain Goat and OJ from Hop Products Australia (former head brewer at Moo Brew) has offered their services.

“Ever since the trip to the US 15 years ago when the beer lightbulb switched on, I’ve not only wanted to be serving the best beer but brewing too. It was on the backburner as we established the pub, but we’ve been serious about it for the past five years and planning for 18 months in earnest.”

The core Wheaty beers will all feature her favourite ingredient – not anchovies, but rye. There will be the Ryewaka, brewed with Lobethal, a light rye ale brewed with Europe noble hops called the Noble Ryelet, and a Black Rye IPA. Aside from that, there are 35 more recipes floating around – not to mention the ideas that collaborators will bring.

“The end game was always to produce our own beers and not depend on being able to source other people’s kegs,” says Jade. “Fast and light and nimble brewing: talk about a beer, then brew and drink it within three or four weeks rather than waiting for something to be imported.” 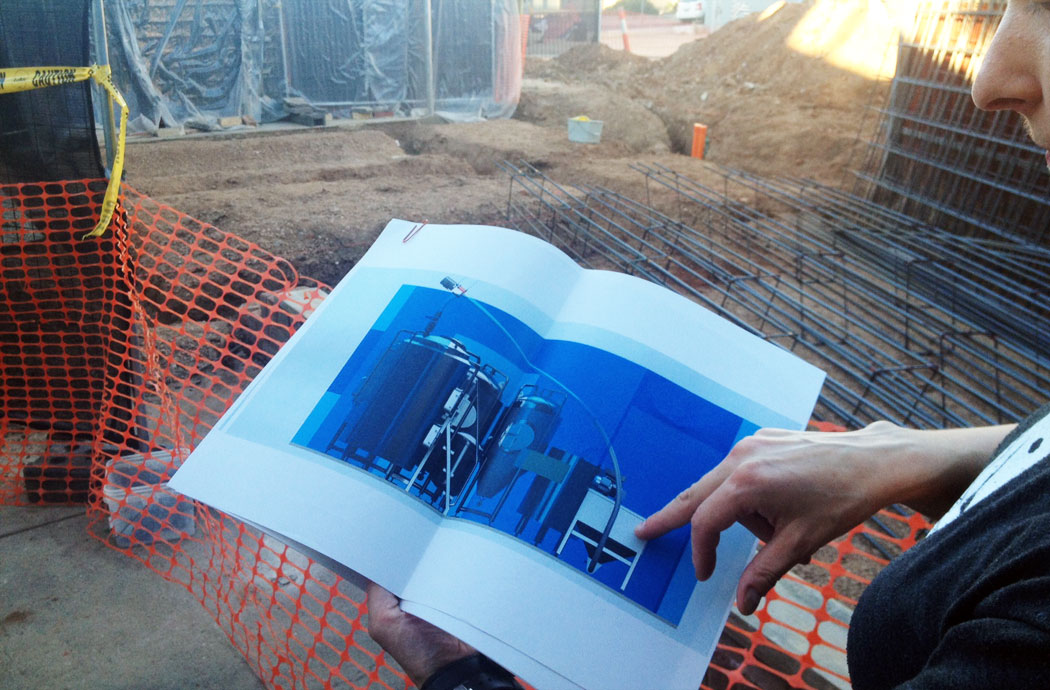 It opens up the opportunity to brew for community events too, such as the roller derby league that they sponsor. And for brewers to come to The Wheaty and try “retro-fitting” Wheaty beers just as The Wheaty has done to those of brewers via their Glasshopper.

For now, the ground has been prepared for the brewing shed to be erected and the stainless steel has been delivered. All that remains is for the Wheaty Brew Corp to ensure their brewing skills are up to the exacting standards they’ve set for others.

“I’m still taken aback when these brewers come here to do masterclasses as they are some of my brewing heroes,” she says. “The concept of brewing with them on our kit is phenomenal.

“We’ll be getting an education that money can’t buy. It’s exciting, to put it mildly.”