Hops In The City

There are few breweries in Australia that have associated themselves as closely with hops as Little Creatures. The WA brewery’s first beer, Little Creatures Pale Ale (originally entitled Little Creatures Live) was designed as a means to bring the wonders of new, more aromatic and flavoursome American hops to the Australian market. They are voracious devourers of hop flowers, with huge, custom-designed equipment within their breweries that have the sole purpose of adding hop aroma and flavour to their beers. And, in a move that may have surprised those wondering in which direction the brewery would head once it was wholly-owned by Lion, the most recent permanent addition to their range is the pungently hoppy IPA.

During Good Beer Week, the Little Creatures Dining Hall in Brunswick Street will be turned into a Hop Farm for the week (more details below) while, before then, the culmination of another public hop showcase takes place this weekend.

The brewery joined forces with Melbourne’s Little Veggie Patch Co to grow hops as part of their Pop Up Patch at Federation Square. It was an experiment conceived, of course, over a beery conversation and one that has delivered unexpected results.

“It began when we were sitting around talking about hops with our mates at Veggie Patch,” says Ash Cranston, marketing manager for Little Creatures. “They did a lot of stuff with our garden at Geelong [where Little Creatures now has a second brewery and venue] and we were just chatting. The idea came up to see if we could grow some hops in Fed Square, so they planted a single rhizome in September but we didn’t know if we would have enough sun.

“Lo and behold, it grew and grew. We got to the point where there was a kilo of hops â we were stoked that it had worked. Hence we thought,‘ Let’s pick them and have some beers and a barbecue with them.’”

So they are, at 3pm this Saturday (May 10). As for what they plan to do with the hops themselves, it turns out they left in growing a little too long to be useful for a beer (the main Australian hop harvest took place more than a month ago) so are more likely to end up decorating the Dining Hall. The public growing concept will continue, however.

“It’s something we want to evolve,” says Ash.“We’ve had a lot of great discussions about where else can we grown them. We’ve talked about using the outside space at Geelong, where we plan to create a brewery village, and have started to explore that as we have a huge amount of land there. We’d like to grow them in Fed Square again as it feels like a good place to play around in; for us being a pop driven brewery, it feels right.” 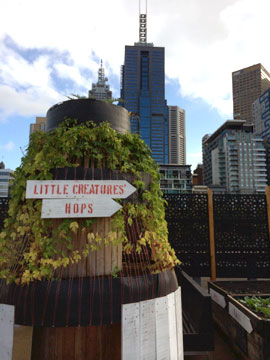 As for Ash himself, it turns out that, despite having worked in beer for years and holding a position of some seniority within Little Creatures, his hop epiphany was fairly recent. Sure, he was au fait with hoppy beers, but a trip to Hop Products Australia’s farm in the Victorian High Country (see photo at top) last year proved a revelation.

“I lost my mind!” he laughs. “I couldn’t stop telling people about it.

“The people there were so passionate. I came away wanting to grow some hops and thinking, ‘This is amazing â everybody needs to go there!’ There were hop cones as big as my hand.

“[It’s great to] expose people to the real ingredients, to say this is what we grow. It’s really relatable and sparks their interest.”

Such experiences will be central to Good Beer College, which is being run by Creatures at their Dining Hall during Good Beer Week as part of their sponsorship of the Beer 101 stream. As well as hanging 400m of fake hops from the rafters of the venue (fake because they were wary that some people may have allergic reactions if the place was filled entirely with real hops, of which there will still be plenty), what is picked from Fed Square is likely to form part of the Hop Farm, along with a barn that is being built on top of the kitchen and, we understand, a smattering of scarecrows throughout the venue as well.

Should they prove up to scratch, some of the hops being picked on Saturday may well be thrown into a Randall (the glass cylinder that allows Creatures' bar staff to add other ingredients to beers as they are being poured at the bar).

“The aim is to, as far as possible, create a hop farm experience,” says Ash. “It’s the Little Creatures version of what one looks like. Every day we will do a different beer with a different hop component, both from White Rabbit and Little Creatures.”

If you are unable to make it down to the hop picking BBQ on Saturday, or indeed to the Dining Hall during Good Beer Week, then you may still chance upon one of their other ventures during the festival. Flash Firkins will see them “pop up” in various venues around Melbourne armed with a different, one-off firkin of one of their beers, and we are told to expect Lycra, capes and trumpeters. Don’t say you weren’t warnedâ¦