There can be little doubt that the past month saw more collaborations taking place across Australia than at any previous time. With so many international brewers flying into the country for Good Beer Week and various spin-off events, such as Good Beer Wheaty and one-offs in other states, there were plenty of opportunities for them to hook up with like-minded â or not so like-minded â local brewers to leave some tasty treats behind.

The list of those that partook in collaborations â or indulged in a spot of spooning, if you prefer the nomenclature used to describe the process at The Wheaty â is as impressive as it is long. Among those to leave a beery mark on the country were the Yeastie Boys, To Ãl, Birra del Borgo, Sixpoint, Stillwater Artisanal, Weihenstephan, Deschutes and Rogue, with their local collaborators including Doctor’s Orders Brewing, Hargreaves Hill, Lobethal Bierhaus, Boatrocker, Bridge Road, Edge Brewing Project, Red Duck, Moon Dog and Mornington Peninsula Brewery.

With many of them due for imminent release, we thought it would be a wise move to round them all up in one place so you know who has been brewing with who, what they have been brewing and roughly when you might be able to get your hands on fruits of their labours.

BrewCult & Magic Rock – Salt Dick
Steve “Hendo” Henderson, BrewCult: “This was the collab beer that Stu from Magic Rock and I brewed during Good Beer Week. It’s essentially a 6 percent IPA with Pilgrim hops from the UK and the new Aussie variety Enigma.

“So the reason it’s called Salt Dick is that this beer has one foot in England and the other in Australia and it’s wang dangling… Well, you get the idea…”

As for what makes it different: “Firstly, UK Pilgrim hops, traditionally used for bittering, were used for flavour and aroma to impart its herbaceous and cedar like characteristics. Secondly, the Enigma was specially provided by Hop Products Australia [to create] one of the worldâs first IPAs to be brewed with Enigma. Finally, Stu and I settled on a simple malt bill of mostly Golden Promise (UK) and mashed it in such a way as to accentuate bitterness and dryness. This is not a malty IPA â itâs all about the hops.”

Hargreaves Hill & Deschutes – International IPA
Kai Damberg, head brewer at Hargreaves: “For our collaboration brew Kris Scholl, technical director of Deschutes Brewery, took time out of his busy Good Beer Week schedule to come out to our brewery on the Wednesday to help us brew up a tasty little batch of IPA.

“The recipe and process were settled over a few weeks of bouncing emails back and forth across the globe prior to the event. To keep the international collaborative vein, we elected to go for a 6 to 6.5 percent IPA with hopburst style hopping profile in the kettle using Aussie hop Vic Secret, a promising new US hop variety called Equinox and some NZ Rakau too just so the Kiwis don’t feel left out. On a base of good old Aussie ale malt we added some Briess US specialty malts: Victory and Caramel Munich.

“Unfortunately for Kris our single-infusion mash tun wasn’t up to his suggestion of a simple three-step mash profile, but we did manage a little mash "sous-vide cookery” with a leg of lamb cooked in the tun during the mash rest.

“The beer is currently finishing cold-conditioning, is a lovely orange colour and has some some rich biscuit malt character. The hopping regime produced an excellent orchard-fresh orange-marmalade flavour and aroma profile and a dry finishing bitterness that integrates exceptionally well with the malt and hops.”

Look out for the beer in kegs in about a fortnight. Some should also go out in 330ml bottles shortly afterwards.

Edge Brewing Project (VIC) & Stillwater Artisanal (US) (pictured above on the brew day at Cavalier) – Fingerlime Saison
Adam Betts, Edge: “Went for a saison style beer, as that’s obviously what Stillwater specialise in. I was planning on using fingerlimes in an upcoming brew, as they have beautiful vibrant citrus crystals and aromatic peels.

“As with the Wattleseed Stout (new batch ready next week) I like to use native ingredients, and this will continue to be an ongoing theme in future beers. All fruit/spice additions to Edge beers will be in balance and there to provide undertones to compliment the beers and add an additional layer of complexity. You won’t find any of them to be particular flavour bombs or cloying.

“I’m a fan of super dry saisons, so this one is fermented right out to low gravity, and brewed with pilsner malt, light munich and wheat, lightly hopped with a NZ/Australian mix. It’s all late hopping, so no big bitterness.

“It was great brewing with a master like Brian and working together on the beer! I’m super happy with how it turned out: light and cloudy colour with a flavour profile that’s dry, tart, clean with restrained farmhouse funk and citrus undertones. Very refreshing!”

Out this week – called Angel of Zest

Red Duck (VIC) and Stillwater Artisanal – Cactus Saison
Scott Wilson-Browne (Red Duck): “Provisionally called Cactus, it’s a French farmhouse ale, with added wild lambic yeasts. It’s cactus in the sense that we used a fair bit of prickly pears and agave syrup. It has had a primary fermentation in stainless steel and is now residing in oak barrels, where we think two to three months of ageing will round it out.

“Why did we brew it? Because we could… Well, Brian is quite particular about the styles of beer he brews: artisanal and saison being big key factors, and he wanted to use the collaboration with another small artisanal brewery (that’s us) to do something we would both be excited by, so a French farmhouse saison base. A Red Duck fan mentioned a while ago that he could get some prickly pears, so I said perfect let’s put that in the saison, and got some agave syrup to round off the cactus theme. It’s just what you do for an artisanal collab brew… isn’t it?”

As for release, it “depends on how it turns out. At least three months, but possibly a little longer. I’ve never made this one before so we will wait and see! It will get into a cask for a handpump session at The Local Taphouse St Kilda. A late spring, early summer release is pencilled in, but it might be late summer or… 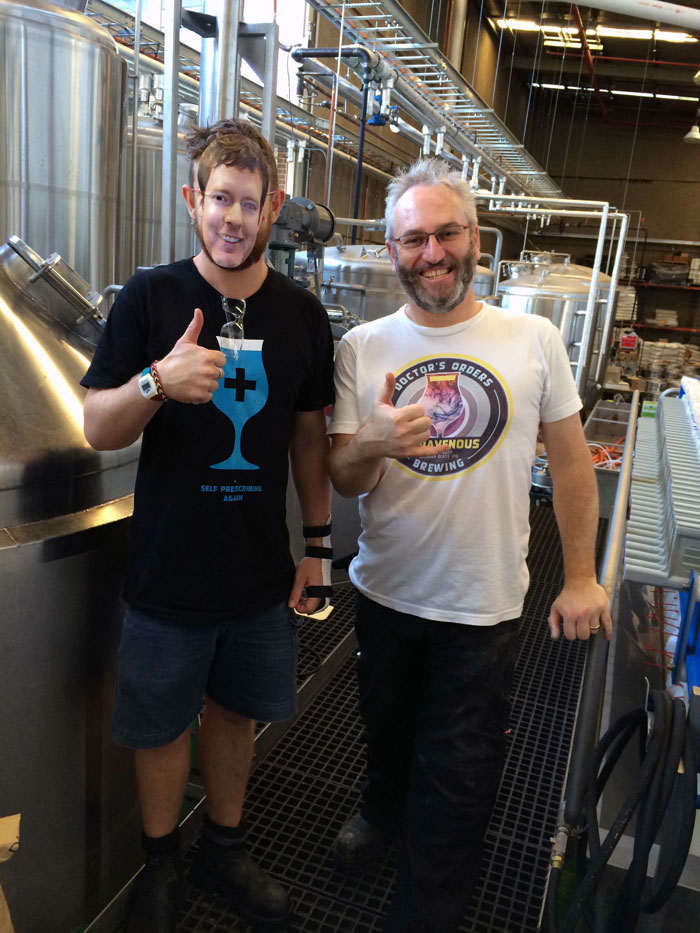 A cardboard cutout Shane from Sixpoint with the Doc

“Shane (from Sixpoint) was in a motorcycle accident just before he was to come to Oz. We’d collaborated on the recipe and details and so on since January. So we ended up doing the brew day via iMessage with myself in the brewery and Shane in a hospital bed.”

Doctor’s Orders Brewing & Yeastie Boys & Wheaty Brew Corp – Tonic
This was one of multiple Claverton brews created during this year’s Good Beer Wheaty in Adelaide. Darren: “Second up [for him] was a collab with Yeastie Boys and The Wheaty on May 19.

“It is called Tonic. It’s essentially a beer tonic with cinchona bark, juniper berries and orange peel. It is the mixer to accompany your favorite gin. Launch party will be at the Wheaty in July.”

He says the the day was seamless, with Stu McKinlay from the Yeastie Boys adding that this wheat ale was created “Because brewers love G&T!”

Other Good Beer Wheaty brews
Stu was involved in two other brews at The Wheaty. They were:

Lobethal Bierhaus & Yeastie Boys – Lisa
The Yeastie Boys and Lobethal Bierhaus have been collaborating for a number of years now. Each beer, such as Bruce, has taken the name of one of their pet dogs. As of last year, they had run out of dogs so a new pet was purchased in order that they could brew once more this year. Said dog is called Lisa.

Stu: “The third in our annual ‘dog series’ with Al and Rosie is a Kolsch-style ale with orange zest and fennel (a favourite combo of Al’s from the Lobethal kitchen). Expect a long, cold conditioning and a release in later winter or early spring.”

Boatrocker & To Ãl – Berliner Weisse
Matt Houghton (Boatrocker): “We collaborated with Tobias from To Ãl from Denmark. The brew was on the Monday of Good Beer Week at our brewery in Braeside. We brewed a five percent Berliner Weisse, aged in freshly emptied chardonnay barrels with the addition of bitter orange.

“Why? We both love sours, and we had access to some amazing barrels, and without wanting to wait years for another type of sour, we wanted something that would have relatively quick turnaround for a sour beer.

“This beer will (should be) available here before Christmas, and also in Denmark around the same time.”

Temple Brewing Company & Weihenstephan – Re-Unifikator
You can read all about the brew day for this beer in our review of the event here. It is the second collaboration between the Brunswick East brewery and the world’s oldest brewery, with Temple head brewer Glenn Harrison telling us: “We brewed a Smoked Amber Wheat because we wanted to brew a fairly traditional German style using Australian Hops (Galaxy and Southern Cross).

“The beer will be released first week of July here at the brewery before kegs will be rolled out at select bars around Australia.

“The taste is really good as you would expect. The run off [on brew day] was fairly long [the brew day stretched well into the night] but that just makes the beer more special and exclusive!”

Bridge Road & To Ãl & Birra de Borgo – Black Session IPA
Ben Kraus, Bridge Road: “Session IPA seems to be the flavour of the month coming out at the moment, and there’s plenty of talk (argument) about whether or not it is really a legitimate style. We thought it’d be a good idea to add fuel to the fire and make a black one.

“We also had a shitload of random odds and ends hops at the brewery and gave Tobias and Leo the task of picking from the leftovers during breakfast to come up with a hop regime.

“It’s ready to roll now, and has according to [Bridge Road brewer] Steve ‘the worst beer name ever’ and that is One Sunday Morning Somewhere Three Hours North of Melbourne.”

We reckon that’s a pretty awesome name – reminds the Crafty Towers residents of the KLF’s classic Chill Out album.

Ben: “I’ve also been lucky enough to brew again with To Ãl, BDB and Lervig from Norway in Italy. We brewed a revamp of the Reale, practically an imperial version with some extra specialty malts, plus we also picked elderflowers from the roadside and added them to the whirlpool.”