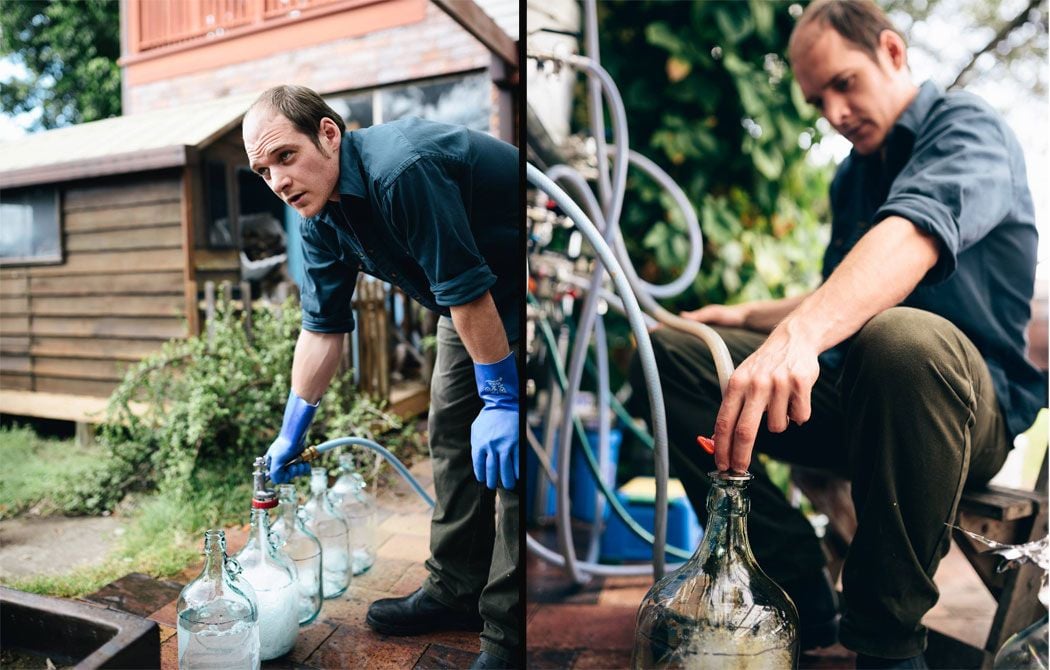 Like many beer enthusiasts before him, Gavin Croft’s appreciation for fine beer began with a familiar route: via cartons of Tooheys and Carlton. For Gavin, beer was and still is a fantastic reason to bring people together. He describes beer as an “equaliser” – a simple liquid that when shared and enjoyed “eliminates any pretentiousness”. Share a beer in Gavin’s company and you’re on level ground. It’s a sensible approach and one that has enabled him to keep his feet firmly on the ground since his rise from cracking open cold Carlton cans to launching Croft Brewing Co later this month in Brisbane.

Gavin describes his yearning to brew beer as akin to a small, inextinguishable fire burning deep inside from a young (but legal) age. He found himself continually trying different beers and recalls three notable instances.

“I remember when the James Squire range of beers was first released and thinking how novel it was to have easy access to beer with more flavour,” he says.

A chance meeting with Ian Watson (now Fortitude Brewing Co.) around the same time at Toowoomba’s Spotted Cow Cellars was a huge eye-opener. Ian introduced him to a wider spectrum of choice.

However, it was a European vacation circa 2007 that fuelled and eventually solidified Gavin’s flames of desire.

“Travelling around Europe trying beers that I’ve never seen or tasted before gave me more of a hunger to do things for myself,” he recalls. “Being part of beer festivals, drinking in large, historic beer halls and spending time in Abbeys was almost overwhelming.”

The inevitable foray into home brewing occurred a year later with a partial mash. Being ‘promoted’ to Assistant Home Brewer to Andrew Sydes (now Green Beacon Brewing Co) was another turning point. He reminisces about those early days sharing a house with Andrew and brewing all-grain beers.

“I learned a lot with Andrew. He taught me so much about all-grain that my own recipes started turning out really well.”

Yet another familiar face from Brisbane’s craft beer industry appears in Gavin’s past too.

After perfecting his home brews, Gavin studied for the Graduate Certificate of Brewing and notes that he never completed his undergraduate, with his application to the course initially rejected. Some begging, pleading and proving his worth to course director Peter Aldred followed and eventually he overturned the original decision.

Between the beginning of 2012 and the end of 2013 things escalated. Not only did he commence growing and cultivating his own hops but triumph in a home brew competition saw Gavin’s winning beer tapped at The Scratch Bar. The encouragement gained from watching patrons part with their cash to drink his beer was enough to provoke a job application to Bacchus Brewing, which proved successful. During his tenure at Bacchus Brewing, Gavin was exposed to an intimate education with a fun-loving team and almost every hop variety and malt type under the sun at his fingertips.

Two work experience trips were also tucked under his belt during this busy two-year period. Another visit to Germany enabled Gavin to spend some time with his beloved smoked beers at the famous Schlenkerla brewpub in Bamberg. However, an entire week spent at 4 Pines excited him immensely. 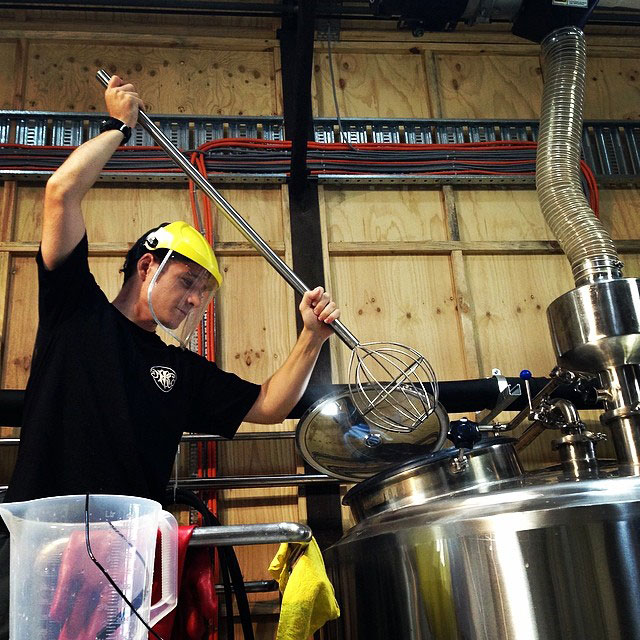 “Those guys were great. I got involved in every single aspect of production from opening sacks of grain to seeing bottles of beer leave on a truck. It was eye opening to say the least.”

Eight months then spent working behind the bar at The Scratch with “a collective of weirdly wonderful, expressive people” saw Gavin gain an insight into how an excellent bar operates as well as an appreciation for what customers really want. Since the inception of The Scratch’s weekend Alementary classes, Gavin has appeared on a number of occasions as a guest speaker as well as attributing his voice and knowledge to speaking arrangements with the Ministry of Handmade – a local group dedicated to all things craft… not just beer.

With such an illustrious recent past, Gavin Croft is cherishing the present, as he explains: “I’ve been working with and for Mark Howes at Newstead Brewing for three months now and it’s great – especially with his shiny new brewery! My employment came about by simply being in the right place at the right time. I was enjoying a meal with my wife at Newstead one evening when Mark and I got chatting. One thing lead to another and the rest is history…”

With jobs brewing beer at working breweries few and far between, he counts himself as being very lucky, adding: “I’m also learning to do more concise analysis due to Mark’s laboratory experience and science background. It’s very rewarding. I’m planning to continue at Newstead part time.”

But, more crucially to the Croft story: the imminent future.

After registering the business name Croft Brewing Company back in 2012, Gavin has commenced brewing for himself on a contract arrangement at All Inn Brewing at Banyo.

“A croft is a lawn, a paddock, a farm, a green space and a crofter is a farmer,” he says. “My father, grandfather and great grandfather were all farmers and Iâm proud of this heritage. Iâm using our family name because I want to create beers that are synonymous with hard work, honesty, good company and green spaces. It will be a family owned business not subject to shareholders and quality will come before everything.”

These are respectable words from an engaging man with a promising future ahead of him. Furthermore, it is utter proof that the burning sensation deep inside wasn’t due to any ill effects sustained by drinking Tooheys.

Details of the official launch will be available soon. There will be four beers in Croft Brewing Co’s stable, released in clutches of two at a time.

First up is Saison Grenade (pronounced in French as “say-zon gre-nard”) which is a pomegranate saison. Gavin lists saisons as one of his favourite styles and his first commercial beer promises to be dry and spicy yet bitter with tart characteristics – one for the sour fans. The grenade is in reference to the explosion of flavour being generated by the inclusion of pomegranate.

The second beer is a sessionable, hoppy American pale ale called Wolf Scratch, named not after the bar where Gavin worked but instead in reference to the hop plant itself and its aggressive nature. Gavin has personally endured countless scratches whilst tending to his own hops. Plus, of course Lupulus – as in Humulus Lupulus – is Latin for wolf.

The third and fourth in the lineup will be a 3.0 percent brown ale (Southern English Brown) â a super malty and chewy mid-strength, and a 4.7 percent smoked German pale beer called Smoked Helles which has been designed as an easy drinking lager with a hint of Beechwood smoke.

Keep an eye on Croft Brewingâs Facebook page for news of the launch that is likely to occur either late June or early July.

You can keep tabs on the Queensland beer scene via Darren’s blog 250 Beers. 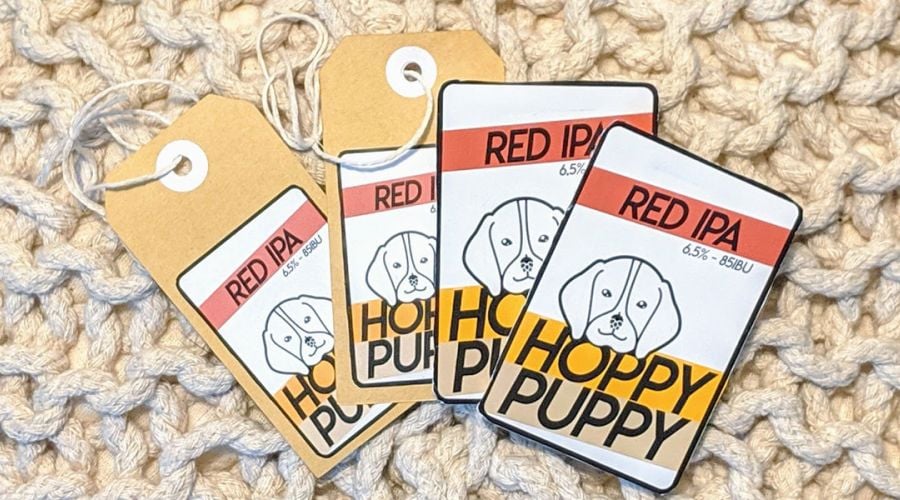