As an independent craft brewer, it’s fair to say that when you own a grain silo you’ve made it. So, when you’ve got two grain silos, wellâ¦ Such is the situation these days for Stone & Wood, the New South Wales brewery that has been playing a game of catch up with demand since putting the first beer through its new facility in Murwillumbah a few weeks ago. That first beer was Pacific Ale, the most stunning success story of the last decade in the Australian beer world and, for the foreseeable future at least, the only beer that will be filling the 250,000 litres worth of tank space at the $4m facility.

It’s not just a case of two grain silos, either, as they now have two breweries. Their original site in Byron Bay is still operational â and looking rather more like it used to before Australian’s insatiable desire for their beer forced founders Brad Rogers, Jamie Cook and Ross Jurisich into a state of almost constant expansion. The old haunt is now responsible for producing Lager, Jasper, Stone Beer, Garden Ale and any other limited release beers they choose to brew, such as those from side project The Mash Collective, which drinkers are likely to see more of now that the new facility is online. It will also remain the venue for semi-regular events.

“It’s a nirvana site,” says head brewer Brad of their new home in Murwillumbah. They had first laid eyes on – and fallen in love with – it in 2011 but dismissed it as beyond their wildest dreams. When it became blatantly apparent that they would never cope at Byron Bay, they returned and took possession last year. “It’s a perfect building for us,” he says.

According to Jamie, with tongue somewhat in cheek, when it came to filling the space it was simply a case of taking the scrap of paper they’d drawn the original brewery on and making it bigger. And while that is true to an extent, in that there is the same physical flow from utilities through brewhouse (the same make as before but twice the size), tanks and packaging, it’s also a considerable step up. The extra space has allowed them to plan wisely, with plenty of room to manoeuvre around the steel towers that rise like a mini-CBD between brewhouse, complete with steepling hot and cold liquor tanks (“A giant phallic symbol,” jokes Ross), and a packaging line that can push through 10,000 bottles an hour and features a high end German filler that has been attracting inquisitive owners from other larger craft brewers like moths to a bulb.

It’s an impressive setup because it has to be. Despite huge shortages of Pacific Ale across the country, Brad, Jamie and Ross chose not to bridge the gap via contract brewing. While many other Australian breweries have managed their growing pains by paying others to brew their beer, it was never a consideration for Stone & Wood. Instead it was a case of keeping their independent customers as happy as possible and cranking out as much beer as possible, 24 hours a day, through Byron Bay; then, once the new place was ready, the fermenters were transported the short drive to Murwillumbah and were being filled within 24 hours.

“It’s been very difficult,” admits Brad of the time spent repeatedly telling retailers and in turn drinkers that, sorry, we got no beer. “It’s been difficult across the business, not just the brewers but the guys on the road and in the office. We don’t want to go through that again.” 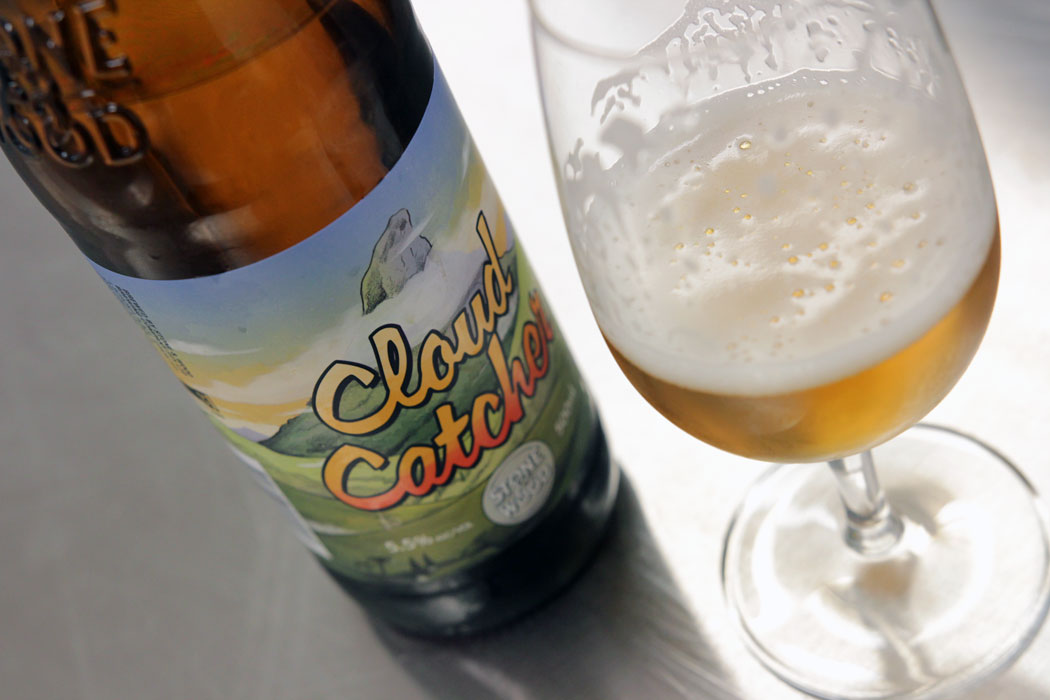 With the Murwillumbah brewery fully operational, The Crafty Pint was invited on a whistle-stop tour alongside a handful of other drinks journos. A former Bunnings trade warehouse site, it sits under the gaze of Mt Warning, which lends its name to the beer they’re releasing to commemorate its opening. Cloud Catcher is a single batch (unless it proves hugely popular), all-Aussie affair brewed in Byron Bay with Galaxy and Ella hops and rather delicious to boot.

“It’s a celebration of where the business is – not just opening the brewery,” says Brad.

Where the business is, especially with Pacific Ale tasting great at the new site, is at the start of a new era, ready to take another leap forward, to put craft beer into more new hands, and possessed of a seemingly irresistible force. In fact, such has been its incredible growth despite the owners frequently taking tough decisions, such as buying back the 20 per cent share that had been owned by Little World Beverages (owners of Little Creatures and White Rabbit) once that was taken over by Lion, it’s easy to forget how young the business is.

It feels like Stone & Wood has always been there, that its rise was inevitable, what with its founders' skills and past experience – including many years spent within the craft arm of CUB – combined with an easy charm, a sense of community and, not least, a beer that has made incredible inroads into the mainstream while remaining loved and respected by beer geeks. Yet it wasn’t always thus.

During the tour, the three reminisce over the early days, when they would share tiny digs and pound the streets trying to sell beer. Brad would have a batch of kegs ready to go and would call Ross to see how the sales were going.

“I only sold one keg,” Ross would tell him.