For six months Grant and Jaz Wearin lived the beer lover's dream; travelling around the West Coast of the USA visiting every brewery they could. But it wasn't a holiday. Well, it was – but it wasnâ't just a holiday. The Aussie couple had a loose idea to open up a brewery of their own back home, so this was effectively R&D.

Says Grant: â"The idea had always been simmering away, but then when we were in the States we thought, 'This can definitely be done.' From the day we got back, which was January 2013, I worked pretty much full time on it – my wife's still at work – and here we are 18 months later."

“Here” is Mona Vale, in Sydney's Northern Beaches, where the Modus Operandi brewery opened at the end of July. It's not an area known for beer, but when you pull up to the gates and see tables full of happy drinkers it's clear that there's as much thirst for it here as anywhere else. Part of the appeal is in the venue itself, with the brewery, bar and casual dining venue benefiting from the Wearins having taken note of what they liked most about the breweries they visited and trying to incorporate the best elements into their own business.

"We definitely picked and chose,“ says Grant. "We took a lot of inspiration from Portland and Colorado in particular."

While they may have taken inspiration from those areas, they took something else too: brewer DJ McCready. Having worked at the famed Oskar Blues brewery, DJ's move to Australia just happened to work out, as he explains in his laid back North Carolina drawl.

"I was planning on coming over here anyway just to do some travelling to Australia and New Zealand and I knew the craft brewing scene was taking off, so thought maybe I might be able to land a job somewhere – or maybe just have a cool holiday.

“But I started talking to one of my buddies at Rogue about it and he called me a few weeks later saying, ‘If you're serious about it, these guys are opening up a brewery right outside of Sydney and I think it'd be right up your alley – they want to do all these cool different beers.’ And it just worked out, so here I am!"

He's made his presence felt immediately. Where many new breweries in Australia are the project of a homebrewer-turned-pro and invariably involve a bit of a settling in period as they come to terms with the larger equipment, DJ's experience has meant Modus Operandi has hit the ground running. Indeed, it takes a certain level of gumption to open a brewery with seven beers, including two saisons. The rest of the initial range is made up of a cream ale, pale ale, two IPAs and a porter. As Grant suggests, it's a deliberately expansive selection designed to make a bit of a statement.

"We knew from our travels that first impressions really last so it was important for us to have a good lineup and be able to say, ‘This is what we're going to be doing’. We're going to have more, but seven was really all we could pull off in a couple of months."

And pulled it off they have, with the first batch of brews proving a hit from top to bottom of the list. Says Grant: "The cream ale's designed to be highly sessionable – a classic California Common style and our unashamed gateway beer, but it's got flavour. We actually had a debate about whether Australia was ready for a cream ale. DJ won and he's still winning because it's really popular."

At the other end of the spectrum, if you were to pick one brew that will have hardcore beer lovers hooked, it's likely to be the Former Tenant, an unashamedly bold, Mosaic hop-fuelled, 7.8 percent US-style IPA.

"Former Tenant has been our biggest selling big beer,“ says Grant, "which I'd call anything over about 6 per cent. I'm super stoked with how it turned out. We've had a few beer geeks in here chewing our ear off about it which is nice."

As well as brewing nous, DJ has brought with him to Australia an acute awareness of beer trends happening in the USA, the country so often cited as being the leader of the pack. To that end, Modus Operandi is set to take the canning revolution up a gear by becoming only the second brewery in the world to offer one litre takeaway cans that are filled directly from the brewery taps (the first was, naturally, his former employer Oskar Blues).

Fill your own cans, you might ask? DJ explains…

"Basically it's a turn-of-the century food can seamer that, at Oskar Blues, we re-did to fit one litre aluminium cans. We fill off our taps, the can goes into the seamer on the bar, spins them around, puts a lid on them and there's your ready-to-go packaging.

“We're still testing it out to make sure it works but at Oskar Blues, where they have the proper testing equipment – whereas I'm just filling them, shaking the shit out of them and leaving them out for a week and seeing if they still taste good – they were saying they were getting almost two months out of them. I think you're probably getting around the same oxygen content as as 330ml bottle but because it's such a big vessel the amount of oxygen contact is small in comparison.

"But we'll still treat it like a growler and tell people it's not like a regular can of beer – you want to drink it pretty quick so hopefully it won't be a problem. I mean, when I buy beer I have a hard time getting it home before I open it!" 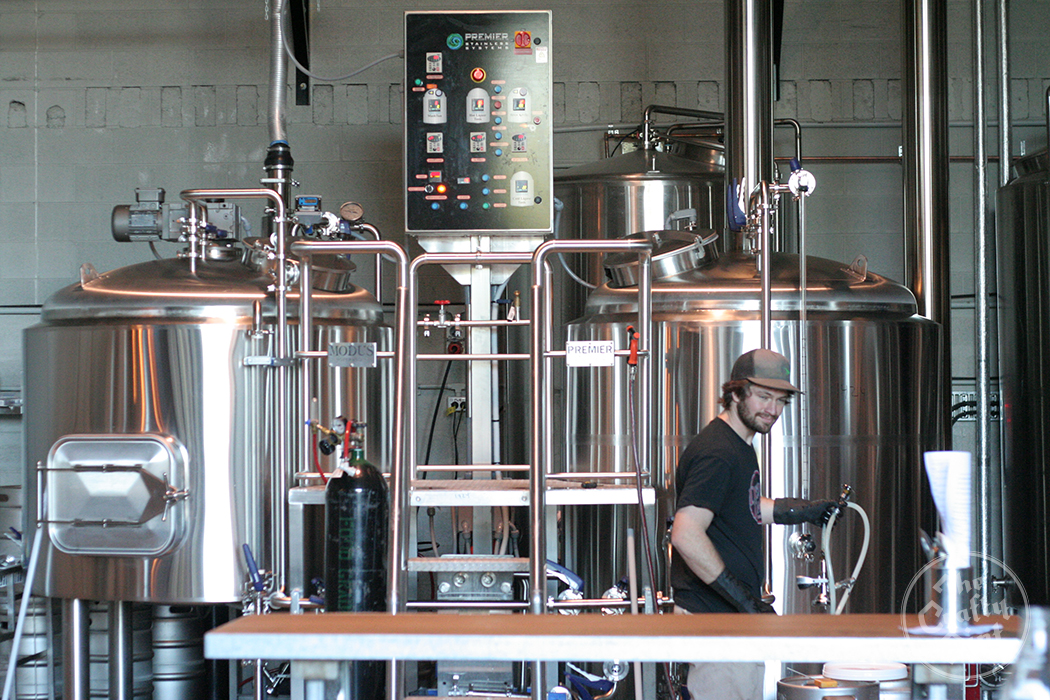 In the meantime, there are several new beers to focus on. A couple of old Lark Distillery barrels sit atop the chiller, one filled with porter and the other likely to house the red IPA. There are some white wine barrels on the way in anticipation of a sour beer program, a Double IPA in the pipeline, a light summer IPA to come with the changing seasons and a Black Coffee Lager ready to go. The latter is a collaboration done with their the business next door, the Coffee Brothers, who brewed and added the coffee to the tank while it was still warm.

Getting their neighbours involved is reflective of what Modus Operandi is already achieving in their new home, namely getting more people interested in beer.

"I've had so many people come up to me in the brewery and say, ‘I've never thought about how beer was made before’,“ says DJ. "It's a real 'Whoa!' moment for them and it's really cool to be able to educate people, for example, that certain characters you taste or smell come from a hop. Hopefully folks will just be receptive enough to keep trying the beer."

With a great venue pouring some great beer, chances are they will be.