We'd last seen Dave Adams at around 4am on October 3, 2010, as we savoured the afterglow of Collingwood's premiership flag on what paint-stained clothing later revealed to be an as-yet-unfinished trophy presentation platform in Gosch's Paddock. Several months later, sat in the crowd at Collingwood's first game of the 2011 season alongside Dave – one half of musical comedy duo ElbowSkin - we discovered that much of a beery sense had occurred since.

Within a week or two, we'd caught up again with the other half of ElbowSkin, Ern Austin, approached our friends at The Post Project, tapped up a few friendly brewers and bar owners, and said beer song had become Beer Song with accompanying video. Good Beer Week had an unofficial theme, which was later to be performed at the first ever Good Beer Week event and then over the big screen at that year's Australian International Beer Awards.

We all know what has happened to Good Beer Week since then and it turns out that *Beer Song* has become integral to the subsequent career of its creators too. More than four years later, the video continues to pop up in all parts of the online beer world, while Dave and Ern have been contacted by brewers as far flung as Canada and Spain telling them that, should they ever be in their country, please call in and be their guests: a performance of Beer Song for unlimited hospitality. Meanwhile, when they were invited to be part of this year's Melbourne International Comedy Festival national tour, the festival director insisted that the song had to be part of their set. They've also picked up regular gigs in the beer world and now appear to be taking things to their logical conclusion.

On October 1, as part of the Melbourne Fringe Festival, they will launch their new show, From Beer to Eternity. It's a 55 minute show that uses the medium of musical comedy to explore beer, right from its very earliest days up until the current craft beer explosion.

"The show looks at the history of beer and its impact on the world," says Dave. "How it saved lives and helped to shape society."

"It's also about dispelling some of the myths about beer being bad," says Ern. "Back in the early days, it was more of a health benefit and a way of providing safe, clean liquid and vitamins when water was generally dangerous to drink.

"In most of the ancient cultures, it specified that women had to do the brewing: only women of noble birth or really beautiful women too."

While plenty of research has gone – and is going – into the new show, the duo were already well placed. In the dozen-plus years that they have been performing together since meeting at school, they have supplemented their time on stage with peripatetic careers in the world of fine dining and have long had songs about wine in their oeuvre. Indeed, they have also performed comedy degustations at which food and beverage pairings are matched with the comedian on stage at a particular time in the evening.

That said, it's beer that seems to be increasingly the dominant theme.

"We've written the show for this year's Fringe but then we will take it to Adelaide [for the comedy festival] and want to take it overseas," says Ern. "There's a bit of an Australian spin with the history [in the current show] but we could just as easily go to the US and do it over there, tailoring the show accordingly. We want it to be a show that we can take on the road." 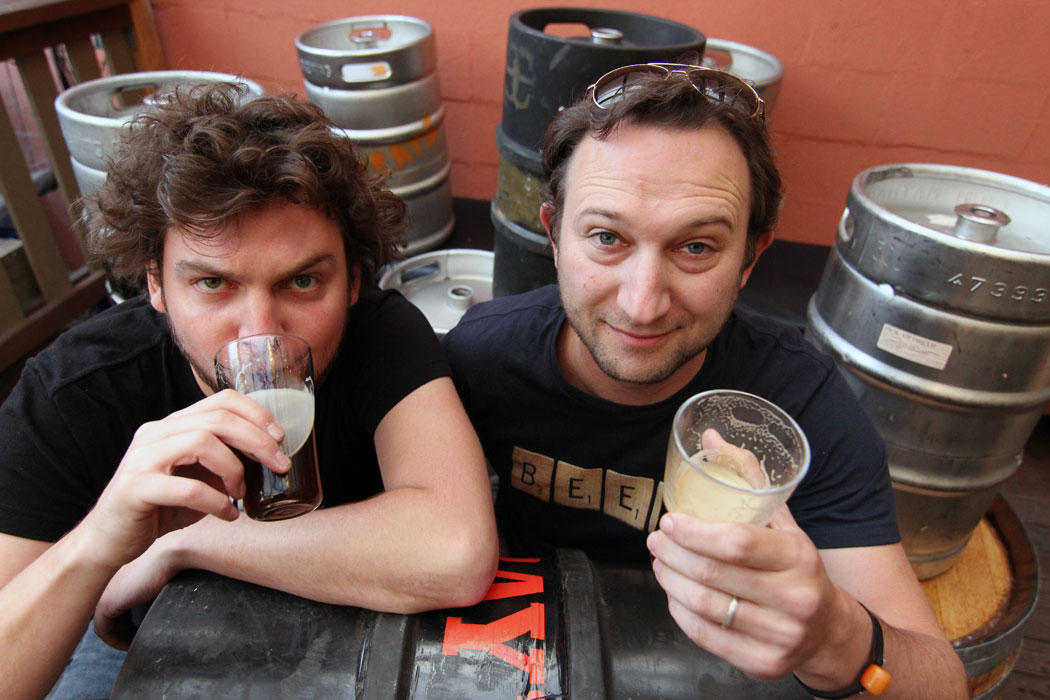 "Beer Song got us into craft beer a lot more than we already were," says Dave. "That first Good Beer Week really open the door – like it did for a lot of people."

Having done so much research and found themselves, like many before, fascinated by beer's incredible history and unravelling more and more little known stories, one challenge has been to ensure the comedy side of From Beer to Eternity remains front and centre and that it doesn't become too much of a thesis on why beer is so wonderful and important.

"We have got a blackboard..." admits Dave.

"But there are songs all the way through," adds Ern. "We've got some Olde Worlde type songs, some sea shanties and some Irish pub song sort of moments.

"It's proven to be more difficult [writing to this theme] but that's because the topic is so broad. You find yourself researching about countries or ancient civilisations or embroidery just to make sure the jokes are factually correct."

You can find out how they've struck the balance from October 1 to 5 at The Butterfly Club off Melbourne's Little Collins Street. Tickets are available here and we will also be giving away a pair of tickets to the opening night in this Friday's newsletter. What's more, if you're heading to the [Festival of the Frothy III, a certain comedy duo may well be making an appearance...

Trailer for From Beer to Eternity