It would seem that the phrase "craft beer" has been deemed clickbait worthy by editors in the media in the past year. Where once you'd struggle to find any coverage of beer anywhere in the Australian mainstream, now you'll find several articles a week. This week has been no different, whether it's Bacchus garnering coverage for its cheeky B20 event in Brisbane or the heartwarming tale of the childhood friends, Rohan Peters and Mike Basset, running Coldstream who the Sydney Morning Herald celebrated for running "one of Australia's most successful micro breweries" in the article "It's bottoms up at Coldstream Brewery".

It's a claim that's backed up within the article. They are "turning over in excess of $10 million a year" (mostly from sales of Coldstream Cider) and export to Singapore, Hong Kong, Taiwan and, soon, mainland China. Their products are sold in Dan Murphy's and BWS and they've been "the official cider of the Australian Grand Prix and Moto GP for three years now."

Basset splits his time between his veterinary practice and the brewery. Unlike Peters, who quit his IT job in 2010, Basset doesn't see the need to be at the brewery full time.

"Since we bought the other partners out four years ago, there is certainly more work involved. But with Rohan their [sic] full time along with about 20 staff – 10 full time – I feel as though two to three days a week is enough."

Meanwhile, underneath a photo of the two of them in front of brewery tanks is the caption: "Peters is full time at the brewery, but Basset divides his time between the brewery and his veterinary practice."

Here's the rub: while there was once a brewery at their Coldstream venue in the Yarra Valley it was moved to a warehouse in Moorabbin some time ago, where it is now used to brew Riders Brew Co beers. Peters and Basset still own much of the equipment and do have occasional small batches brewed for them there by the Riders team. The Moorabbin site is the backdrop for the photos that appear in the paper too. Other than those small batches, however, the remainder of their beers are brewed under license at Southern Bay near Geelong, with only their cider production remaining in the Yarra Valley.

Having worked as a newspaper journalist for years prior to setting up The Crafty Pint, we understand that journalists may not always capture the full story, can misquote interviewees, and that the sub-editors responsible for captions and headlines may be working remotely from the journalist (especially in these straitened times). All of these can lead to misrepresentations of the real story.

However, if you've been in to Dan's or BWS, perused the craft beer section and had your eyes land upon Coldstream's Czech Pilsner, you'll have noticed that the six-packs and bottles both state in capitals: "BREWED IN THE YARRA VALLEY FOR A DRY HOP FINISH". 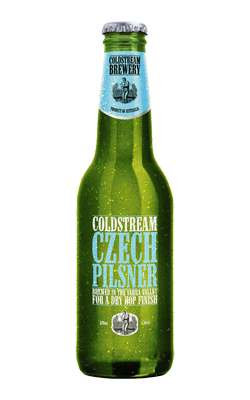 "We don't at any stage want to be 'hood winking' anyone or participating in deceptive conduct, but have had some growing pains in recent times!" said Peters when we put questions to him following the article earlier in the week.

"We do have a current issue with our labels which has been due to us not moving fast enough after having to transfer our brewing operations to a larger facility 18 months ago. We are working on new packaging with our marketing agency to ensure the labels accurately reflect provenance and our brewing arrangements. The copy on our new website reflects the change along with other collateral but yes the packaging is lagging. No new product will be bottled under the current label with new artwork going to print very shortly."

He adds that they are "very keen however to get back to brewing onsite", at least with their seasonal brews, and have been in "on again off again" negotiations with the CFA for two years to acquire a site next door.

It's good to see that steps are being taken to correct the information currently in the public domain and if they are to return to brewing in the Yarra Valley it will be a welcome boon to the region, particularly in light of this week's announcement that White Rabbit is to leave Healesville in six months. But it raises the issue again of potentially misleading labelling / representation of products.

Many in the craft beer world were only too happy to applaud the ACCC when they adjudicated against CUB for the labelling of its Byron Bay Lager, which suggested it was brewed at the tiny Byron Bay Brewery when it was in fact brewed at their rather larger Warnervale site. And, outside beer, there have been other high profile cases, such as that of Maggie Beer changing the labelling of some of her products, all of which suggests that people do care about honesty and the provenance of what they are consuming.

For small, independent craft brewers, one of the advantages they have over the brands coming from multinational behemoths is their story: often unique, colourful and an integral part of why drinkers are drawn to support them. If drinkers lose faith or begin to question whether these stories are genuine, this strength is undermined.

According to Peters, who was prompt and open with his responses, there has been no deliberate intention to mislead, just a set of circumstances they faced as a growing business. And theirs is merely one shade in a wider spectrum of grey areas within craft beer, whether to do with labelling – should breweries who outsource some or all of their production state on the packaging that they're not brewed in-house, for example? Or the issue of tap contracts – can small breweries really complain about the actions of CUB or Lion when, in some cases, they install their own taps or help fund the installation of tap systems in return for lengthy stays in a venue?

Business is, of course, business and as the craft beer industry grows so does competition. But, in an industry that at its core claims for itself such traits as authenticity and integrity, it becomes harder to justify throwing stones if parts of your house are made of glass.

To quote well known philosopher Bobby Gillespie of Primal Scream: "You got the money, I got the soul."

For us at The Crafty Pint, and many craft beer lovers, one of the reasons we love the industry is because it has soul (and certainly little in the way of money), so here's hoping that, as it grows and suffers attendant growing pains, it keeps its soul and continues to set for itself the highest of standards, and not just in the quality of the beers being brewed.