Back before The Crafty Pint existed – back when it was a mere idea going by the name The Wobbly Boot (dodged a bullet there) – we presented our case to the Victorian Association of Microbreweries in the hope of mustering their support. The final line of the presentation we left with them paraphrased Martin Luther King, claiming that our dream was to see craft beer at the MCG, surely one of the last strongholds CUB would ever allow to fall.

Since then, members have been able to sample a couple of CUB's Matilda Bay beers there for a few years now and, last week, for one night only at least, another beer brand made it into the hallowed corridors (well, The Stumps bar). The 'G was the location for a relaunch of the Cricketers Arms brand, its second in the 18 months since it was bought by Asahi, and timed to coincide with a new beer – the Spearhead Pale Ale – and the reinvention of their IPA.

Of course, whether any beer from Asahi – despite its origins as a brand conceived by a man, Paul Scott (above right), who also played a role in getting both Melbourne's Ding Dong Lounge and Cherry Bar in AC/DC Lane up and running with a mate from the Cosmic Psychos – would be considered "craft" by all is open for debate. In the US, its foreign ownership would preclude membership of the Brewers Association, something we put to head brewer Dermot O'Donnell (above left).

"Then neither would James Squire, Matilda Bay or Little Creatures," he says. "I think the thing about craft beer is you have brewers in the place who are genuinely interested in making a superior product, a more flavoursome product, and that's what we are doing."

He likens the Asahi Premium Beverages brewery in Laverton as a "Mercedes Benz" compared to CUB's ten-times-the-size "1970s Kingswood" that he used to work at in Abbotsford and points out that, as well as producing beers for Asahi, the brewers there also brew beers for Coles and Woolworths. To meet growing demand, Mountain Goat has also been brewing and packaging its 330ml range, its hugely successful cans and, most recently, its Steam Ale draught product there; clearly, there are plenty out there that rate the equipment and skills of the brewers. 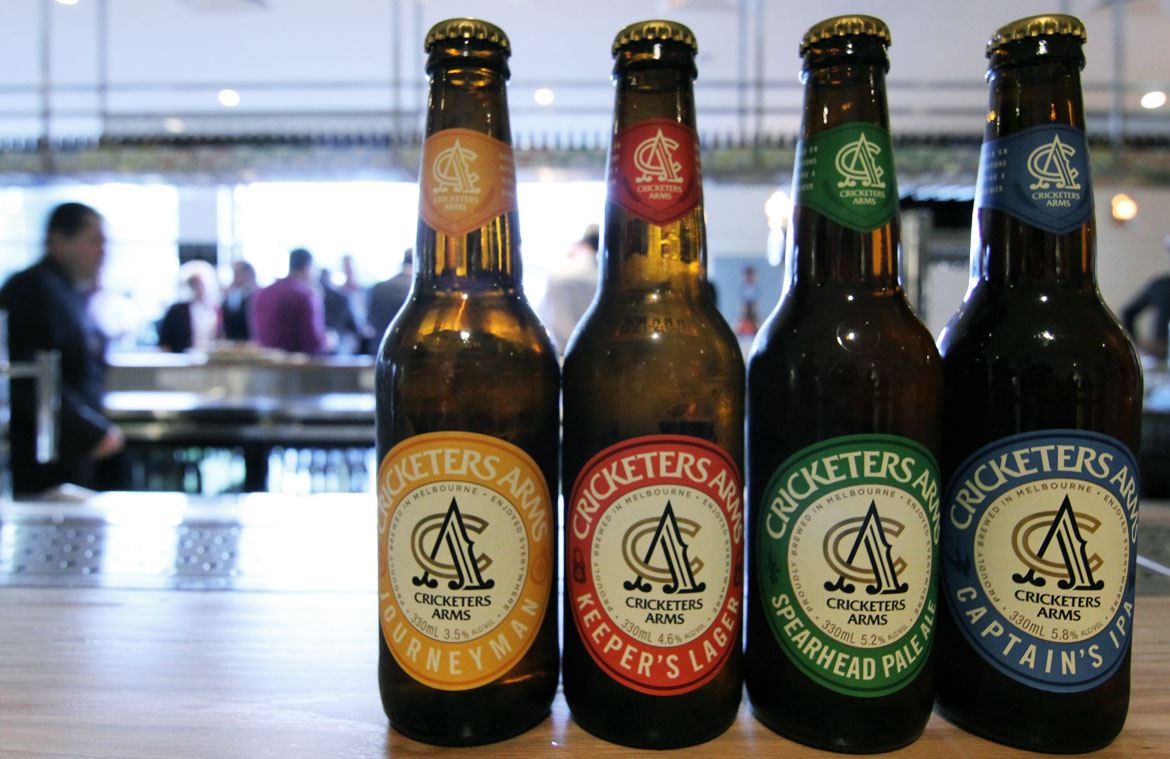 Dermot, who has amassed almost five decades in the brewing business, including stints at CUB and Bluetongue as well as working as a consultant, designed the original Cricketers Arms lager that was initially brewed at Mildura, so has a long history with Paul. For the original lager, the pair sampled "50 or 60 beers" before concluding that what Paul liked was "the drinkability of mainstream lagers" but wanted to "add a little bit of a difference that people would notice," says Dermot. The resulting beer did well enough to attract the attention of Asahi, who made their move last year and announced they had bought the brand – while keeping Paul on board – in April 2013.

Once the new business was established, the lager was joined by a midstrength and IPA before the decision was taken to introduce the Spearhead and relaunch last month. And it's the Spearhead, a well-balanced New World pale ale with a pleasant Nelson Sauvin hop character at 5.2 percent, and the reworked – read beefed up – Captain's IPA at 5.8 percent with distinctive piney, forest floor like US hop aromas ("I call it the Bill Lawrie – it's all happening," says Dermott) that will give Asahi the best chance of attracting existing craft beer drinkers; certainly more so than the "ultra-high gravity brewed" (thanks for the technical lesson, Dermot!) estery midstrength and straight up and down Keeper's Lager, both of which have the palates of drinkers who don't want to be challenged in mind.

"What we're about is making sure [the beers] are refreshing and drinkable so people are able to have two or three," says Dermot, adding that a dark beer called Nightwatchman is in development too.

With Coca-Cola re-entering the Australian market with its Yenda-badged craft range brewed at Casella, these are certainly interesting times in the world of Australian craft beer. At one end, you have dozens of small and smaller brewing companies either opening their own breweries or finding often ingenious ways to enter the market, at the other end you have Lion and CUB streamlining with the closure of the current Matilda Bay and White Rabbit sites. Then, somewhere in between, Asahi, Coca-Cola, Coles and Woolworths are all getting involved too.

Certainly, were anyone still trying to define "craft beer", the days of black and white seem to be getting further and further away, so much so that we may even need to invent new shades of grey.