Kickstarting Crafty’s Q&As for 2011 are the brewers responsible for one of the widest ranges of beer in Australia. Luke and recent recruit Hendo knock out Prickly Moses, Otway Organic and Otway Estate Trilogy of European Farmhouse style beers plus occasional one-offs and a cider. It’s in keeping with the Otway Estate ethos: on the edge of the Otway Ranges in one of Victoria’s wettest spots they also produce wine and cordials while offering cottage accommodation.

Hardcore Collingwood fan Luke Scott has been at the helm for several years, while Steve “Hendo” Henderson moved down from Queensland to join the team in 2010. Here’s what gets them excited when it comes to beer…

Favourite Australian beer (other than your own)?
Luke – Nail Ale (WA)
Hendo – At the moment it would be Murrayâs Heart of Darkness. I have a lot of respect for Shawn Sherlock and his beers

Epiphany beer â the one that set you on the road to becoming a brewer?
Luke – I am a Brian Watson & Michael Pecar (CUB â Brewtech) Brewing ProtÃ©gÃ©
Hendo – Matilda Bay Alpha Pale Ale, before they moved the brewery from WA to VIC. Not that itâs changed significantly â I guess itâs the lazy Sunday afternoons at The Queens in Mount Lawley, Perth that made it an epiphany beer for me.

Desert island beer â the one you’d choose if you were stranded for the rest of your days? Luke – De Koninck Red Ale or Sierra Nevada Pale on draught.
Hendo – Brewboys Seeing Double. Probably because Iâd love to be stuck on a desert island with Brewboy Simon Sellick with an unlimited supply of Seeing Double. That would be totally fun. 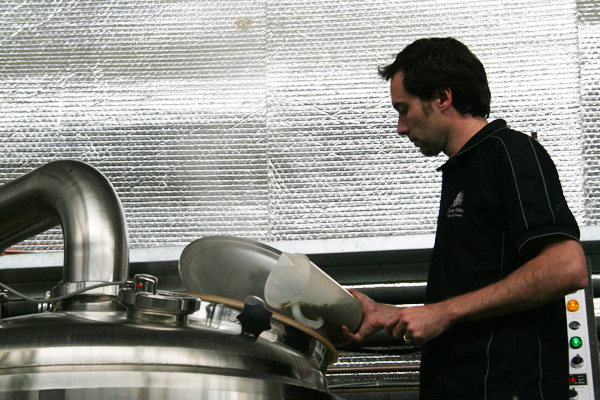 What are we likely to hear cranking from the stereo on brew days?
Luke – Radiohead The Bends, Wolfmother, âThe Chairâ or 774 Grandstand.
Hendo – We had Kings of Leon stuck in the CD player in the brewery for four months until Luke went and bought a stereo just for the brewery. I used to like Kings of Leon until that happened. I love House music and I DJ for fun â Iâll bring in my latest mix and smash out a few beats on bottling day to keep the rhythm going.

Favourite place to enjoy a drink? Luke – In the shed or at Cookie with a brewer or three.
Hendo – The Local Taphouse St Kilda.

If you were a beer style, what would you be?
Luke – A Cassis
Hendo – American Imperial IPA. Bitter. Sweet. Cheeky. Gets you hammered.

The best thing you’ve ever traded for beer?
Luke – A home keg system and a 120kg grain fed pig.
Hendo – Money. Itâs an honour that there are so many craft beer lovers out there who pay me for doing what I love.

When I’m not making or drinking beer, you’ll find me…
Luke – Drinking wine or asleep.
Hendo – I love to DJ house music. Iâm the resident DJ in my lounge room. Youâll also see me out on my VFR800 motorbike chewing up some miles.

Your hope for beer in Australia?
Luke – More craft breweries and âRealâ Brewpubs!
Hendo – Excise reform for small brewers so that we may focus on creating beers that continually test the bounds of creativity by brewing beer to a flavour profile â not a budget.