A few years ago, we were posed a question on Twitter. The tweeter had spotted a sign on a red brick wall in Croydon bearing the name "The Public Brewery" and wanted to know if we knew anything about it. We didn't, but a while later information began to come through that a brewery was under development in this eastern suburb of Melbourne.

As the project got closer to opening, it became apparent it would be more than just a microbrewery too; there would be a bar and kitchen, a bottleshop and a brew-on-site operation for anyone wanting to brew their own beer. Certainly, ambition wasn't in short supply, but would an audience prove to be given its location?

The answer has been a resounding, "No!". Since opening in stages from the start of 2014 – first bottleshop and venue then the various brewery elements – it has attracted huge crowds drawn repeatedly to the beers, the food and the beautifully reinvented former grain shed and auction rooms.

“We're in a wedge where you can go out to Yarra Glen or Healesville and get something nice or go to Fitzroy, Thornbury or Collingwood but there's a gap [for good beer] in the middle," says Michael Smith, the former Dan Murphy's manager now helping run the Public Brewery. “For a long time this was a wasteland for food and drink.

“We always had a focus on the brewery being the key element. We had no idea how successful it was going to be from a venue perspective and how much beer we were going to sell through the bar."

The beer they're selling is a mix of theirs, brewed by award-winning home brewer Brendan Guild on a small 250 litre setup, and a rotating lineup of beers from friends in the Victorian craft beer world.

Having left behind a career in HR (and with it a fair chunk of salary) to become a professional brewer, Brendan was told to “brew whatever you like…as long as it's good beer". And already that has produced a saison, English and American browns, a stout, amber, witbier and others. 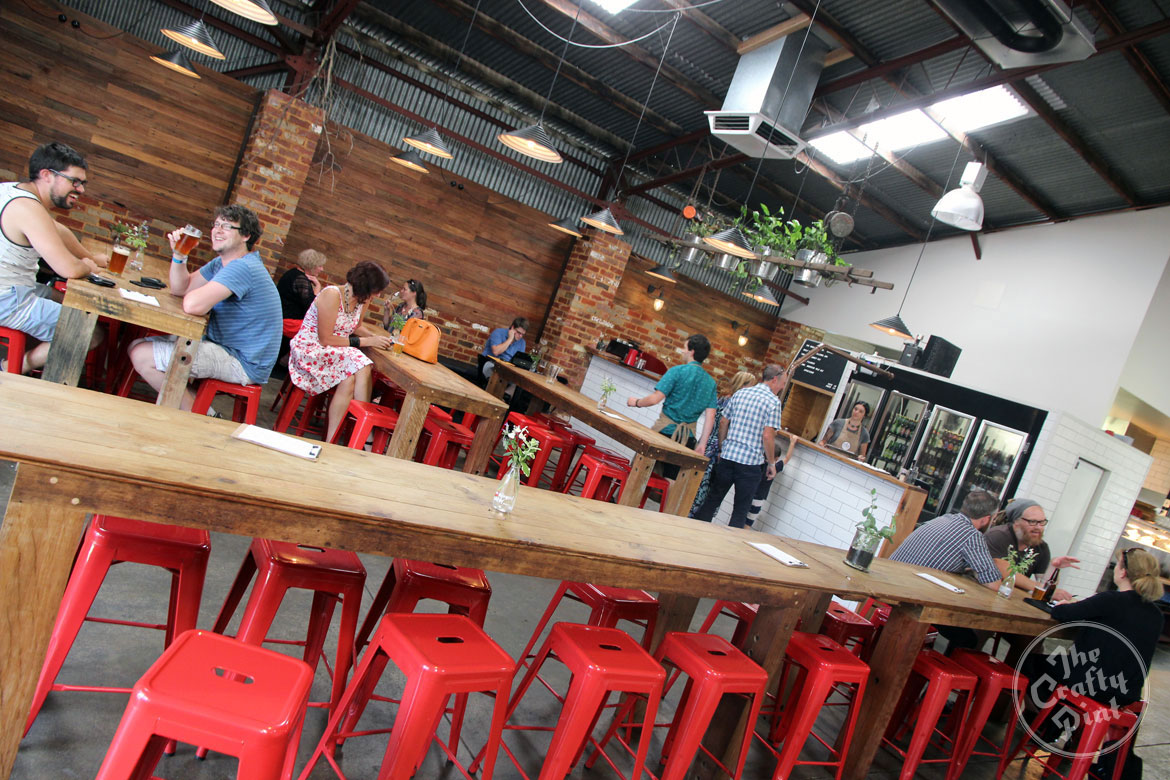 Recently, the Public Brewery tap has been used to showcase a series of pale ales each featuring different hops but, with more capacity being added to their brewery, the plan is to take a second of the six taps for his beer.

Before gaining its new lease on life last year, the building had been a grain shed then an auction house. In fact, according to Michael it “wasn't a very attractive warehouse" when work started with 60 cubic tonnes of rubbish cleared during its reinvention. It was a reinvention started by co-owner Dale White, who would finish the day's work at his nearby cafe and skateboard down the hill to the warehouse.

“Everyone knew the auction rooms were starting to go derelict," says Dale. “We were pretty curious about what was happening down here. It had been in my mind that I wanted to do a brewery so when this became available we thought we could put one in here and it would be sick.

“We found out someone had it and was going to rip it down and put a factory up. I said, 'What if it could be this?' and here we are [with the building owner] as business partner."

Some of the original structure remains – walls, ceiling, mezzanine – but much else is new, from internal walls and a charming rustic, industrial look that is among the most welcoming of any brewery venue in the country.

However, what makes the Public Brewery stand out from most of its peers is what sits next to the small brewhouse: a series of eight even smaller brewing vessels (pictured below right). Here, they invite customers to join Brendan to create their own beers in customised mini-breweries. Starting with a base wort created by Brendan on the main kit, they can choose to make a range of styles, choosing from a variety of hops and yeasts.

“When you come in to brew, you are brewing it but we can answer anything that our customers ask," says Brendan. “We are trying to give customers the skills to go and do it themselves."

The drive behind this side of the business came from Dale. A few years ago, while going through a rough patch, some mates took him to brew a beer for the day.

“It was one of the best days he'd ever had," says Michael, who had queried why his boss wanted eight small breweries instead of one big one. “But it was also one of the worst hospitality experiences he'd ever seen!

“So he was looking for an opportunity to bring the cool concept of brewing your own beer into a cool space with good hospitality, somewhere you can kick with your mates and have a few beers while making your own." 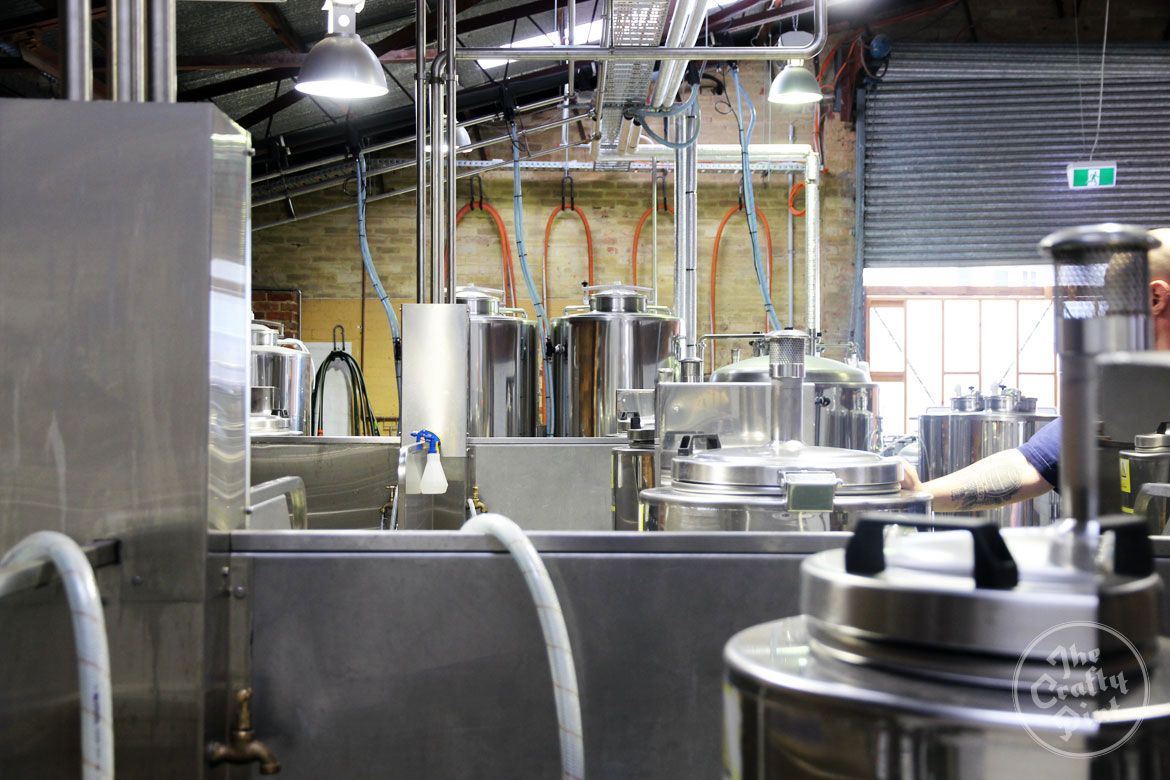 Dale adds: “I wanted it to be a place where guys could bring their girlfriends. The thing that we really, really didn't want was a beer shed for boys to hang out in.

His concept has proved rather popular: in the first three months operating the mini-brewhouses they hosted 120 separate groups of amateur brewers, some who have returned four or five times, paying $250 and ending up with five-plus cases of beer.

And, despite a capacity of just 150 across the wider venue, they regularly serve 500 to 600 people over the weekend with guests coming and going. Some come to brew with mates, others to stock up at the bottleshop that serves nothing but Victorian craft beer, Yarra Valley wines and ciders “from people that are doing it properly", but mostly to enjoy the hospitality side.

They do so within an environmentally-minded business. It features solar panels, recycled timber and uses electricity rather than steam within the brewery while they grow some of their own hops, vegetables and herbs on site too.

“We deal directly with the producers rather than wholesalers," says Michael, further emphasising their small business, locally focused ethos. “Part of that is a relationship aspect as Dale has spent more than a dozen years in the community."

Indeed, Dale has done more than spend time in the community, it seems like he has helped define it. When he opened the nearby cafe Bekendale's a decade ago it was the only one in Croydon; now there are eight. And now he's given the suburb this bustling home of beer in which he hopes to change the drinking culture among young people locally.

“I want to show there's a new way of doing it," he explains. “I'm really excited about Brendan developing a light beer so we can sell this idea that being pissed isn't cool. Alcohol fuelled violence in Melbourne is a worry. We want to get back to it being a healthy thing to get together and have a drink."

The Public Brewery is at 13 Lacey Street, Croydon.

If you want to join The Public Brewery during May's Good Beer Week, then move fast as their event – The Fantastic Four – is going to be one of the first to sell out.

STARTING YOUR OWN BREWERY

Given the unusual combination of multiple brewery systems plus busy venue and their location within an early 1900s shed that was becoming derelict, turning Dale's vision into reality was a challenging project.

So, in line with the series of features on starting a brewery that we ran with Boatrocker's Matt Houghton – and with more and more people looking to get into the brewing business – when we called into The Public Brewery we also picked the brains of members of the brewery team and the man that helped them design the brewery to obtain some tips on getting started in brewing.

Heading up the project was Deo Lule (below left, with brewer Brendan Guild), a brewer for more than 20 years who has worked both sides of the equator. He has worked for big breweries, such as Guinness, and small, including Scharer's in Picton, New South Wales, and the old Sail & Anchor in Freo, and is now a brewery consultant now working for FB Propak. 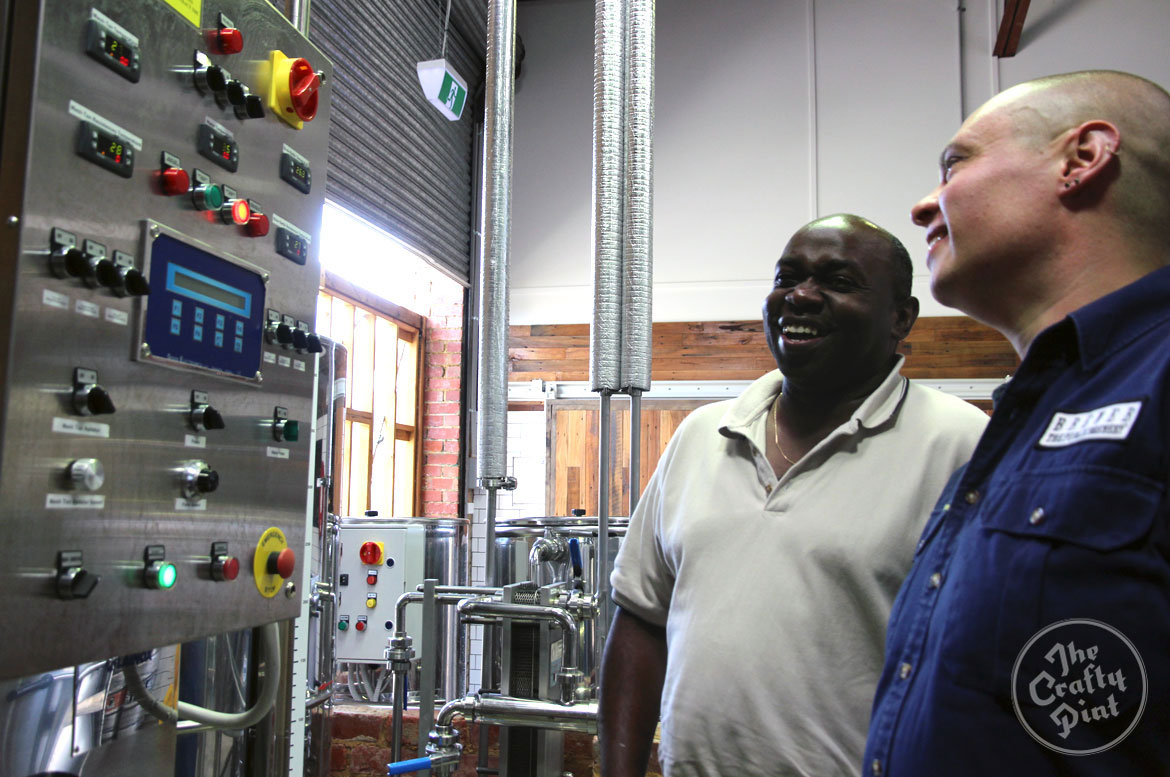 “The project brief from Dale was different from what we've normally done. It was a learning curve for us: the first 250 litre and electric brewery," he says.

“Most of the brief had said that we had to create a space where, once the client walked in to spend the day there, they felt like they were professional brewers here. They wanted to move away from buying extract in bulk like the You Brew It type businesses and were also keen that the brewery was environmentally friendly."

Deo: “Monday is brewery enquiries day of madness when guys have been drinking at the weekend and decide they want to buy a brewery. The serious ones are those that have considered undertaking a course or have some knowledge of what they are seeking."

Deo: “On the day they brought in the equipment [for The Public Brewery] on three semi loads it fitted through the gap with one inch to spare! It just fitted in."

“It's well worth investing in a very good driver and crane operator," adds Michael.

Michael: “Even when the machinery got here we thought, 'Let's tweak that and play with that'. As much as you've got diagrams and drawings, things do change."

Deo: “You need to consider things such as the location of your malt room to maintain the quality of the grain and the need to ensure a dust free environment, to minimise the incidences of hazards occurring and to eliminate any potential infestation of pests."

Deo: “When potential customers come to us with a concept and some indication of the volumes [they plan to produce] we normally arrange for them to visit some of our brewery installs so that they can inspect the plant and also visualise what is involved and obtain the insight of the brewer."

NB: On this, Deo says it all depends on the client's strategy and future growth plans: "From a utilities prospective, we normally advise the client to consider a brewhouse that will cover a future growth volume of at least five years and initially start off with fermentation space required for one to two years, and then come back later for more tanks."

Deo: “We explore the beer styles the brewhouse wants to make. Do you want to filter? Will you be bottling and/or canning? Are you planning on barrel-ageing your beers? What proportion of keg versus packaged do you want to brew?"

Michael: “You need to make sure the power and water is sufficient for the equipment you're bringing in as well as any other requirements of the building."

Brendan: “It took longer than we expected [as all breweries seem to]. Both getting it in the ground then to using it in anger."

Michael: “It's been a constant organic progression – we make stuff work. There's no such thing as you can't do it, you just make it happen."