It's In The Can

It's In The Can

History has taught us that if pirates are ever questioned on where to find the route to their riches, the chances are good that the person asking is likely to receive a hostile response. And, just like pirates, many brewers keep their recipes secret too: tight and close to their chest to prevent anyone stealing their ideas and recreating their beers.

The gents at Pirate Life (who you can read about in our earlier article here) are a little different, however. Yet it's not from being at sea for too long and drinking too much salt water that's the cause; instead these rugged, sun bitten brewers are a little unusual as they are not just happy to share their beery recipes but have also decided to display the entire process around the rim of their cans for the world to see.

The distribution of the first batches of Pirate Life tinnies has begun, with the three beers packaged to date popping up in good venues and bottleshops. However, their rapid ascent to craft beer fame in Adelaide is not the only story.

The design and production of the cans are the real talking point as they have created a world first. Where some breweries are upfront and display all the malts, hops and yeasts that are used to create the beverage on their labels – while some share full recipes online – Pirate Life is taking things a step further. Beginning at the crease of the can, the drinker can follow the brewing process from milling through to dry-hopping before finishing with the recycling phase.

Here's how they create their beers, as shown on the cans: 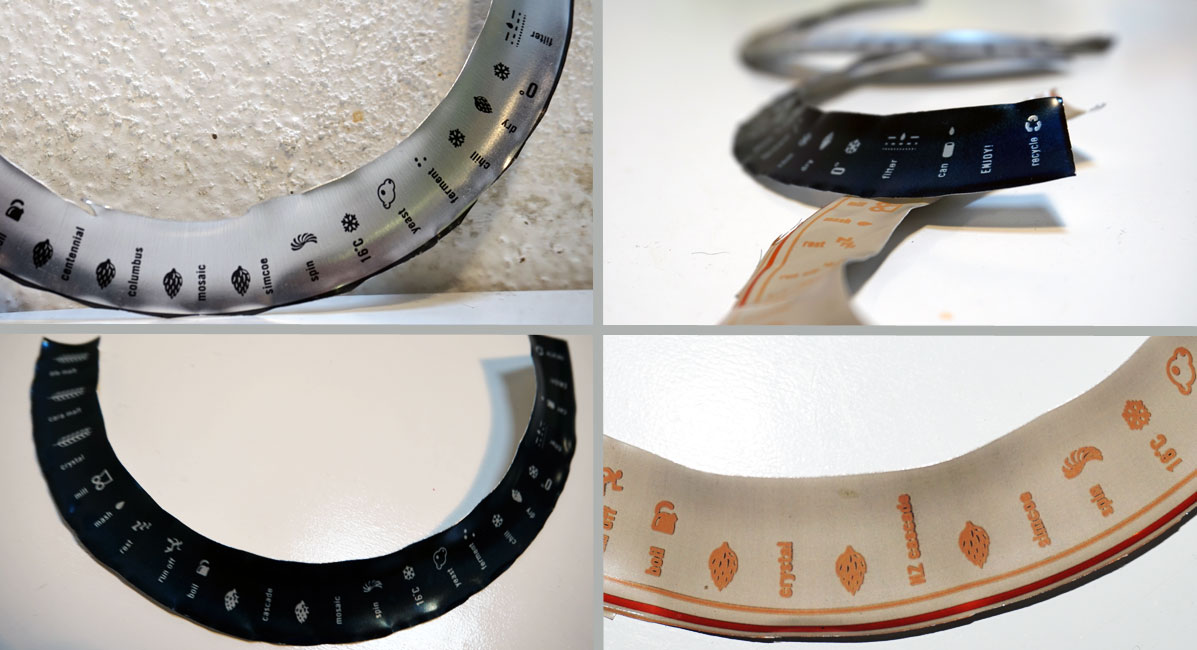 This lightweight beer starts with the brewers measuring out a grain bill of Maris Otter, Carapils, Crystal and Wheat. Next up is the milling of the grains to ensure all the malts are fully extracted. Mashing comes next along with a little resting time. Followed by a quick run off before the boiling steps begin, along with the addition of some hops.

Then come the hops. In the Session IPA, Crystal, New Zealand Cascade and Simcoe hops are used in the boil, with the brewers keen to make sure all the hoppy goodness is extracted and the beer is hopped full of flavour.

The wort is then chilled to around 16 degrees Celsius and the yeast is added, ensuring the temperature is correct to allow the beer to ferment, which can take two weeks or longer depending on the beer. According to the can, the next process is to dry hop the beer, which adds the initial floral aromas that rise when the can is first opened. The beer is nearly ready now; all that is left is filtering and packaging into aluminium. That's when the drinker moves in and enjoys the delicious beverage (cold, of course).

That's not the end of the story on the can, however, because these pirates care about the environment and have added a reminder to recycle.

The steps on how to brew this beer are exactly the same, only the amount and type of malts and hops change. The malts used in this excellent example of a Pale Ale are Ale, Caramalt and Crystal, whereas the hops that are added are Cascade and Mosaic. This recipe results in a hoppy smooth pale ale with a subtle malt profile.

Again the process used by the brewers remain the same; only the amount and type of grains and hops are different. This time grains such as Maris Otter, Carapils and Wheat are milled, mashed and boiled alongside Centennial, Columbus, Mosaic and Simcoe hop pellets. The Double IPA is a big beer at 8.8 percent ABV, however, it is not overpowering. For such a high percentage alcohol beer, the Double IPA flows down the trachea quite easily and is looking like a must buy for any imperial IPA fans.

There are many reasons why tins have been chosen over bottles by the Pirate Life crew, which they believe all benefit the drinker in the long run. Packaging craft beer in tins is a growing global trend, with many overseas breweries doing away with the glass bottle. As an aluminium can lets in no light or oxygen, the beer is not compromised and therefore tastes better. Cans are almost always chosen over glass bottles at major events and festivals and they're more recyclable too. What's more, cans are lighter which makes them cheaper to transport and tend to be of a dimension that allows more beer per pallet, thus keeping more money in theirs pocket and, hopefully, yours.

Pirate Life brewing is not by any means jumping on the bandwagon with these cans, as they have created a world's first. But by displaying their entire process, malt bill and hops they have selected, they are giving drinkers an insight into the brewing process in a fun and approachable way not seen before.

DRINK IT ALL IN

The Pirate Life guys aren't the only ones trying new things with their cans. Over in WA, Colonial have been having fun too.

Last year they released their popular Kolsch in cans as Draught and have since followed up with a second canned beer in an Australia first can. The vessels for their Small Ale come with with a 360 degree lid, first launched by US brewery Sly Fox in 2013, which means you can peel the whole top off and drink from the can as if it was a glass rather than through the traditional small opening.

Read more about it here.