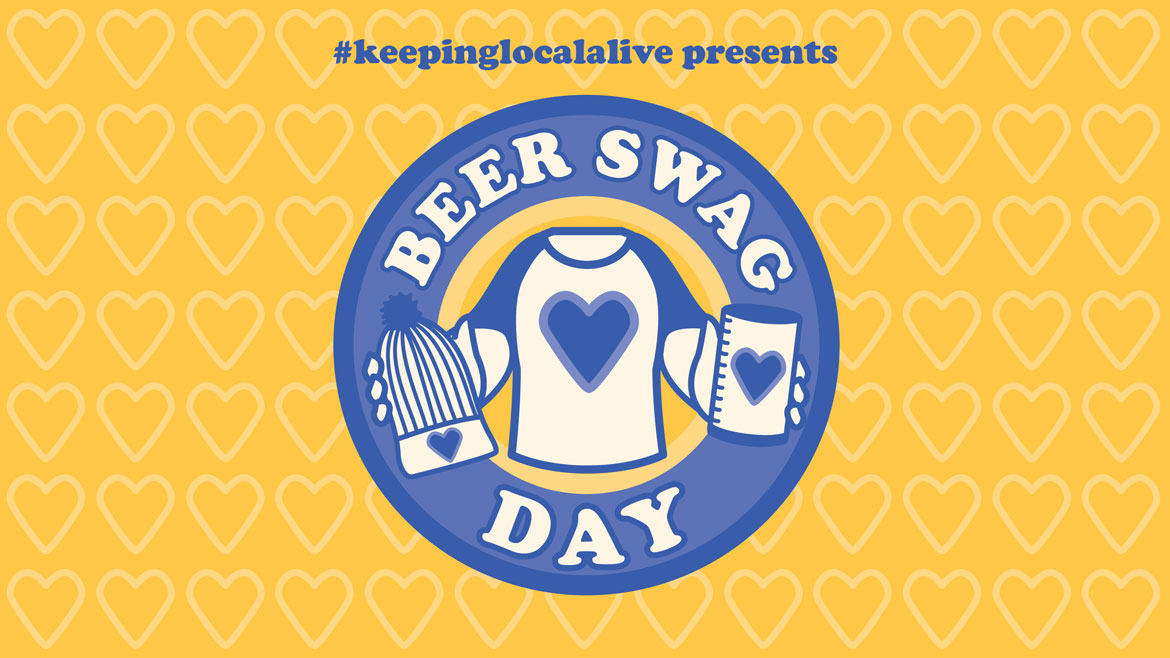 The outpouring of support for the local beer community since the COVID-19 crisis brought much of it to a crashing halt has been incredible. People have been showing off their love for their local pubs, bars, breweries and bottleshops so we thought: "Why not take that up a notch?"

The beer world is a colourful and fun place and it's not just the beer and the people that make it that way. There's the dazzling array of t-shirts, beanies, stubby holders, trucker caps, hoodies, glassware, bottle openers, growlers and more that play their part.

So, inspired by triple j's Ausmusic T-Shirt Day, we launched Beer Swag Day and encouraged everyone to get hold of some swag from their favourite local brewery, bar or bottleshop and show it off on May 23. We even created a #keepinglocalalive t-shirt too.

The day went off, with hundreds of videos and photos posted across Australia and regional winners picked, from which the public voted Sam Beard of Adelaide the ultimate winner of a camping swag full of beer and beer swag.

You can read more about how it all went off here. See you for more shenanigans in 2021!

Pick up some new merch from your favourite local beer businesses (or pull out your existing swag if money's tight right now).

If you're on Instagram use the tags #keepinglocalalive and #beerswagday and make sure you tag the local businesses you're showcasing.
On Facebook, tag the @keepinglocalalive page, the businesses you're showcasing and use the tag #beerswagday.
You can start posting before the big day but we'll be looking at posts on the day when it comes to judging the prizewinners.

We've got a case of local beer and a Keeping Local Alive t-shirt up for grabs for one winner in each Aussie state and the ACT*. We'll be looking for the biggest hauls, the most creative posts, the most amazing pieces of vintage clobber – whatever it takes to impress the team of #keepinglocalalive judges.

The winners* will go forward to a public vote to find the ultimate champion who will win a camping swag filled with beer and merch to be delivered to their door.

There will be one winner of the ultimate prize: the camping swag (pictured above) stuffed with beer and beer swag – and now including a dozen cases of Fury & Son Long Hot Days to be sent to the winner over the course of a year. Human not included.

View the competition rules here. To find out more about Beer Swag Day or the #keepinglocalalive campaign get in touch.

* NB Gaming Control Regulations in the NT mean we can't offer the same prize to entrants there. Instead, we'll add extra merch on top of the Keeping Local Alive t-shirt for the winner of the best NT post.

Thanks to Short Batch / El Loco for their support in getting campaign t-shirts available so fast and reducing their costs too!