White Bay are in bed with their neighbours, The Little Marionette coffee roasters, again but this time it’s less about the complexity and more about the intensity. This is the second time the two businesses at 26 Mansfield Street have blended their expertise. Their previous collab - a Baltic porter with Ethiopian coffee beans - was like the fruity filter coffee you order and discuss with your barista as you explore the intriguing nuances of flavour. Blend 26 is more like the extra strong cappuccino… Read more
Black The team at Mr Banks have picked up many fans with hazy release after hazy release so how do you think the brewery might approach a West Coast IPA? With a healthy helping of haze of course. To be fair, Dawn Patrol isn’t any ordinary West Coast, it’s a DDH West Coast DIPA and, when you've got that many letters, no style guide should dictate how your beer looks. Embark on your own Dawn Patrol and within the yellow and opaque liquid, you'll discover a smooth mouthfeel which lands the beer within… Read more
Golden Yellow Big Shed's original Golden Stout Time shot to fame after it rated highly in the People's Choice at GABS 2015 and has gone on to become one of their most popular beers [One of the most viewed beers on our site, according to the check we did for one of our ten year anniversary features – Editor]. Here, it's received an injection of steroids to boost it to 8 percent ABV and become Mega Golden Stout Time. Its original release actually predates this post – when GABS 2020 was postponed, the festival… Read more
Dark Brown Big Shed have a pretty diverse range of beers, one that's spread across their core range, seasonals, limited releases and the Brewers Series. To those can now be added a new line as they team up with the crew from the Franklin Hotel under the "Hotel Series" banner. The end result is a 9.5 percent, 90 IBU double West Coast IPA that's loaded with hops, hops and more hops, and is set to be the first of many venue collabs. The Franklin Hotel is a 19th century hotel in Adelaide's CBD which… Read more
Golden When it comes to collaborating outside the beer world, it doesn't hurt when you share a home with a few other drinks producers. At Lot 100 in the Adelaide Hills, you find Mismatch alongside Hills Cider, Vinteloper winers, Adelaide Hills Distillery and Ashton Valley Fresh, and for this in-house collaboration the brewers have partnered with the distiller. It's seen them bring back an old favourite, resurrecting the Negroni IPA that first made an appearance at GABS in 2016; a red IPA base is the starting… Read more
Red In the first month of spring, Tallboy & Moose have returned to some of the brewpub’s favourite releases. First up there’s 2 Solid 2 Gold, a sequel to the hazy IPA Solid Gold released in kegs (and crowlers) during the brief time Melbourne’s pubs were open between lockdowns. If there are tweaks to the recipe, they're minor ones, for it comes in at the same 6.5 percent ABV and contains the American hop combination of Bravo, El Dorado and Centennial. Again, it makes for a beer that moves from… Read more
Golden Yellow With so many beers around nowadays containing idiosyncratic new hop variety Sabro, coconut has become a very familiar flavour in beer. But when you get hit with a waft of real coconut, it’s a whole other thing. Piña Colada Smash brings waves of aroma of sweet, almost vanilla-y coconut - “hand roasted coconut”, which makes me wonder how many people burned their hands in the making of this beer. But, in the mouth, a tang of semi-sour acidic pineapple cuts through those waves like the fin of… Read more
Golden Yellow Hargreaves Hill Pursuit Of Hoppiness No.6 & No.7

It would appear Hargreaves Hill's Pursuit Of Hoppiness is accelerating; how else to explain the dropping of not one but two of their one-time-only celebrations of hops? Both feature 20 grams of hops per litre of beer: one is a homegrown showcase, the other puts US varieties to work (while both have me thinking of early tracks by The Orb...). No.6 in the series is the Single Hop Galaxy IPA, which in its uber-pale appearance looks like a Belgian witbier yet is so chock full of Galaxy there’s even… Read more
Golden Yellow It's the week for long-running IPA series to hit the button marked "DDH" in Victoria, it seems. Just days after Hargreaves Hill dropped No.6 and No.7 in their Pursuit Of Hoppiness series, Moon Dog's Doggo IPA series also hits number seven. And it's a double-header too, at least in the sense of the doggos to which they're paying tribute: brewery rep Jared Fita's blue heelers Jimmy and Lawson. Double doggo means double dry hop. And Aussie dogs means Aussie hops, with Galaxy and Vic Secret… Read more
Golden “I think I have to admit that I like big beers. I'd generally rather sit and sip on a big beer or two than smash a bunch of light and bright beers.” So says Liam Jackson, head brewer at Cupitt’s Estate, after releasing another vintage of imperial stout (an entire two barrels’ worth this year) and a triple IPA. This year’s version of the recently rebranded Cupitt’s Barrel Aged Imperial Stout is a big, slow, savoury number. When you stare into the impenetrable black of this lumbering beast,… Read more
Black 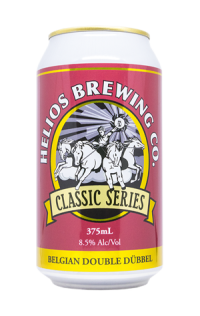 Helios have kicked off their Classic Series with a can design that wouldn’t look out of place next to old Carlton Draught tinnies. But the stuff within is half a world away from an Aussie lager - a Belgian dubbel. “I love brewing traditional,” says brewer Charlie Hodgson. “I love brewing history… It’s important for me to maintain the integrity of the past several decades and centuries of what’s gone before me.” Charlie actually dubbed this beer a "double dübbel", since… Read more
Rich Brown 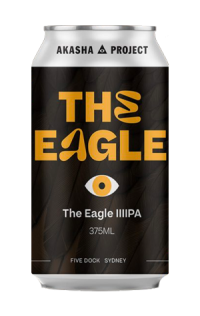 After a makeover and core range shakeup mere weeks ago, Sydney’s Akasha Brewing Co have eased into their snazzy new duds with aplomb. And what better way to really announced your new self to the world than with something that should be utterly absurd but is actually grouse? Everything about The Eagle is so obscene, I almost feel compelled to write to ABAC and tell them that not only is this beer completely unsafe for the eyes of children, I’m not even entirely sure it’s appropriate to be consumed… Read more
Golden They're a remarkably diverse operation are 3 Ravens. There's a tight core range of "normal" craft beers, augmented by their flagship Juicy IPAs. Then there's the barrel-aged, mixed ferment Wild Ravens lineup and wine hybrid Nat Ravs that come accompanied by novellas from the brewers. And then there's nonsense like Nitro Nilla Thicccshake, a nitro-dosed, vanilla- and lactose-laden, milkshake double IPA. If you've ever wanted to know what it would look like if you carbonated the Yarra, give… Read more
Golden I’m old enough to remember when the characters created by CoConspirators Brewing were merely getaway drivers and money launderers; now here we are in 2020 and they’ve got a secret agent on their hands. Well, The Agent might hold secrets but, if she does, they likely wouldn't be kept inside the clear orange beer (I’ll show myself out). What The Agent certainly holds, however, is a hop combination in the shape of Cashmere, Amarillo and Mosaic. Those detonate with a serious explosion of peach,… Read more
Pale Yellow

The Prince of Merewether While much of the beer world, at least when measured by decibels, seems to be chasing bigger, hazier, juicier, sweeter, it's reassuring to know there are plenty following their own path (OK, Molly Rose did release a Mosaic heavy juicy IPA around the same time as this trio, but you get what I mean). With these three tins, brewer Nic Sandery looks to the northern reaches of Europe in three different ways. One sniff and sip of Embellished and I was back enjoying a strong Belgian golden ale with Yves… Read more
Golden Yellow Dainton have enjoyed success with blood oranges in the past, with their Blood Orange New England Rye IPA (now just Blood Orange NEIPA) winning fans and a trophy along the way. And here they take that template and, in a fashion typical of the brewery, pump it full of steroids. In doing so, they've ended up with a beer in which the fruit character takes on the intensity of a cocktail adorned with twisted rind, an intensity that's likely heightened by the extra booze and contributes a welcome tartness… Read more
Golden It's become harder to predict where Pirate Life will turn next over the past year or so, whether in terms of beers, such as light sours with unlikely ingredients, or partners; as I type these words, they've just unveiled a collaboration with Dilmah. That beer is the Tea & Biccies Brown Ale with which the SA brewers "are planning to push the boundaries on what tea and beer can be." For all that, there's been a steady stream of the sort of beers with which they rose to prominence, a spot… Read more
Golden Yellow