The annual migration of Aussie beer lovers to Wellington for Beervana is over for another year. Among those who made the trip was former Wellington resident Kerry McBride, who swapped her hometown for Melbourne a year ago. While there she caught up with some of the people driving the scene to find out what it is that makes Wellington's beer scene so very special.

If you are looking for proof of the impact of craft beer on New Zealand’s capital, you need not look further than the beer fridge at the Cook Strait Bar in the Wellington Airport departures lounge. Alongside the usual offerings of international European lagers and green bottled macro brews, you will find a yellow labelled bottle of pilsner from a little company called Panhead Custom Ales.

It’s a small thing, but that bottle of pilsner is indicative of the way that craft beer has embedded itself not just in beer venues around the city, but into the culture of Wellington. Quite simply, if you haven’t got craft, you’re playing a losing game.

The city has embraced craft beer in recent years, with around 20 craft venues now focused on providing a strong cross section of both Wellington brews and those from further afield. The established haunts such as Malthouse, Little Beer Quarter and Hashigo Zake have been joined by newer ventures that have had significant impact not just on the chances of getting a decent drop, but on the way Wellington socialises.

Malthouse owner Colin Mallon has seen the incredible changes to the city since moving to Wellington from Scotland in 2004. At the time, the bar was selling primarily mainstream beer and the likes of Monteith’s or Mac’s, which passed for craft at the time.

His second venue, Fork & Brewer, is now well established, and when we meet in the middle of Beervana weekend it is pumping. Men and women pour onto the outside deck with special release beers in hand or taste test the latest batch from in-house brewer Kelly Ryan.

The change in both the Wellington scene and the industry itself over the last ten years is like night and day, he says.

“I remember phoning [Tuatara founder Carl Vasta] once and Carl’s daughter, who would have been about six, answered the phone. I asked if I could order some beer and she said, ‘Daddy’s not here, I can write it down’. I’d get quite interesting orders as a result.

“One week, I phoned up to order some beer and they just said, ‘there’s no beer – Carl’s building the house this week’.”

Like the Yeastie Boys, one half of which usually calls Wellington home, Tuatara’s operations have now expanded into international exports and the brewery has recently opened a dedicated tasting room walking distance from the Wellington CBD. Their growth is indicative of where the market is, says Colin.

“People have come along afterwards, like the ParrotDog boys, like Garage Project. Mike Neilson from Panhead used to be the head brewer at Tuatara.

“It’s amazing how it takes all of us together. As much as there’s rivalry between breweries, it’s probably one of the most collaborative industries I’ve ever worked in. We’ll run out of yeast at Fork & Brewer so call up Matt Warner from ParrotDog and he’ll say, 'Sure thing, just pop round and grab some.'” 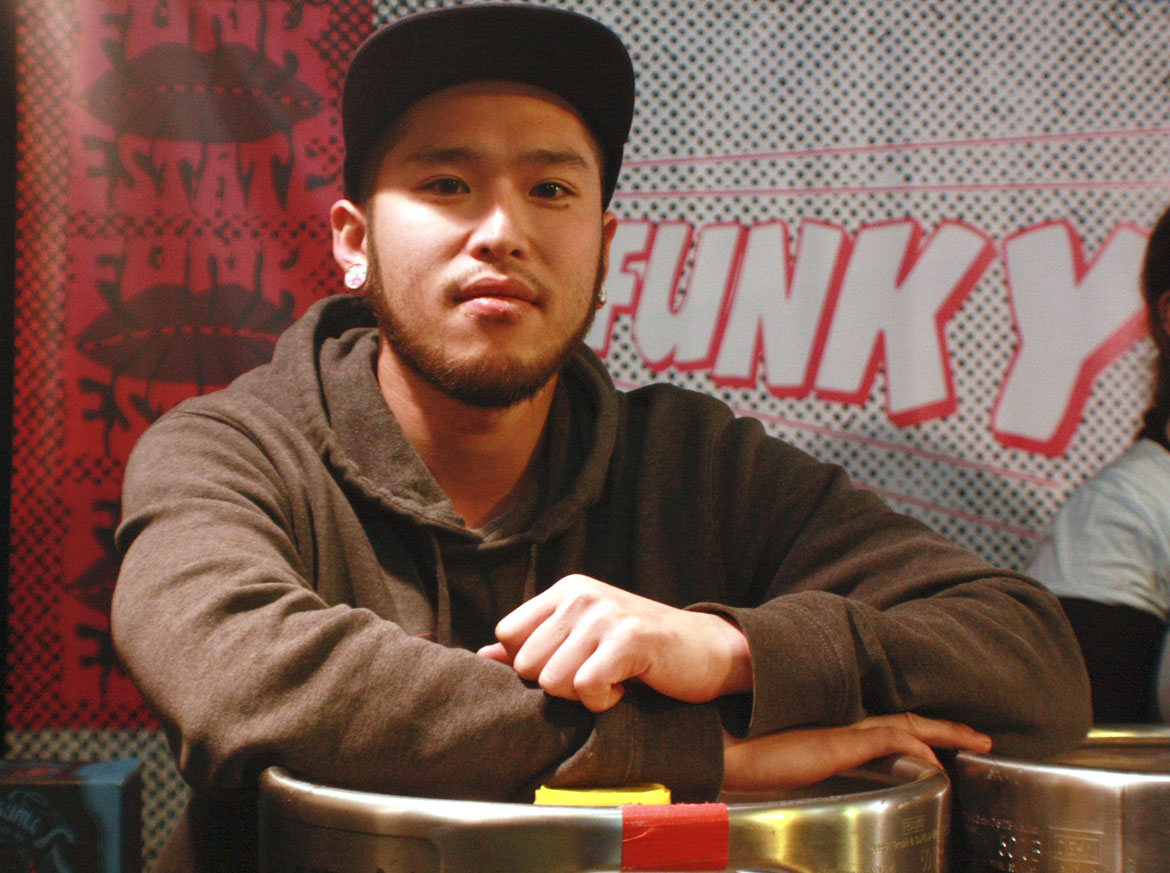 That collaborative approach is echoed by Funk Estate brewer Shigeo ‘Shiggy’ Takagi (pictured), who still contract brews at different spots around the country while their three-year-old brewing company comes into its own.

Proving Colin’s point, Shiggy regularly cleans his kegs at Fork & Brewer. But, says Shiggy, as much as they work together, there is still a level of professionalism and competition in the Wellington brewing scene.

“I would say Wellington is like a team. Everyone has their different interests for their business. It’s not quite a family, because we’re all in the same industry and we are making beer that is going up against mainstream beers.

“At the end of the day, we help each other but it is still a business. You contract brew on their site, you’ll be paying for the space. They’ve still got to pay their staff, even if you’re mates.”

What that team has achieved is to change the way people drink their beer. For such a small city, saturation point is yet to be reached. People now expect craft with their meal whether it's being enjoyed in one of the beer bars or a high end restaurant. The tide is rising and, as the breweries lift their game, so must venues of all sizes.

Perhaps the best example can be found down an alleyway surrounded by what used to be a student bar and a strip club. Hannah’s Laneway is now one of Wellington’s go-to hotspots, as the home of beer bar Golding’s Free Dive (pictured at top), as well as a number of artisan food stores.

You can scratch your craft beer itch at Golding’s and chow down on a pizza from neighbouring joint Pizza Pomodoro, before picking up some boutique peanut butter or block of chocolate, or even some fresh sourdough on your way home.

Wellingtonians are waking up to the quality beer that is available, and want to have beer that matches what they are eating, says Shiggy.

“People love good food, good beer, and good wine. Food is what makes you really happy and you want a beer that does the same thing. It’s changed how people socialise.”

If you were a local who hadn’t been home in three or four years, the transformation across the city is palpable. The gentrification of lesser used spaces such as the Golding’s laneway has drawn the inevitable comparisons to Melbourne, but the walkability of Wellington’s central city means the concentration of venues still remains in town, with just a few trickling out to the suburbs.

This change has not gone unnoticed, and beer tourism is on the up. This year’s Beervana festival once again hosted a bar full of Portland brewers, and Australian breweries including Stone & Wood, Nail, Little Creatures and Mountain Goat exhibited their wares.

Mountain Goat’s Tom Delmont made the trip for the first time in four years, and says the difference has been astounding.

“It’s just gotten so much bigger," he says. "I consider myself a bit of a beer nut, but there are brands and breweries I’ve never even heard of or seen, and they’ve got six different beers.

“There are guys putting everything on the line to start their own breweries over here, even in regional parts of New Zealand.”

While exports are still only a small part of Mountain Goat’s business – around five per cent heads offshore – seeing what Wellington and New Zealand brewers are doing makes Beervana a necessary part of the brewery’s yearly plan.

“New Zealand has been doing a great job for a long time, and in some ways is ahead of Australia. Wellington, to us, has a bit of a Melbourne vibe to it in how it has really taken off.

“I was here four years ago and was really astounded by the number of bars in such a small city. All the restaurants even then were focused on beer. It’s even further down that path now.”

Beer tourism has been a key area of growth and Beervana, which has recently changed hands from previous festival director David Cryer to the Wellington Culinary Events Trust, will no doubt look overseas for growth opportunities. 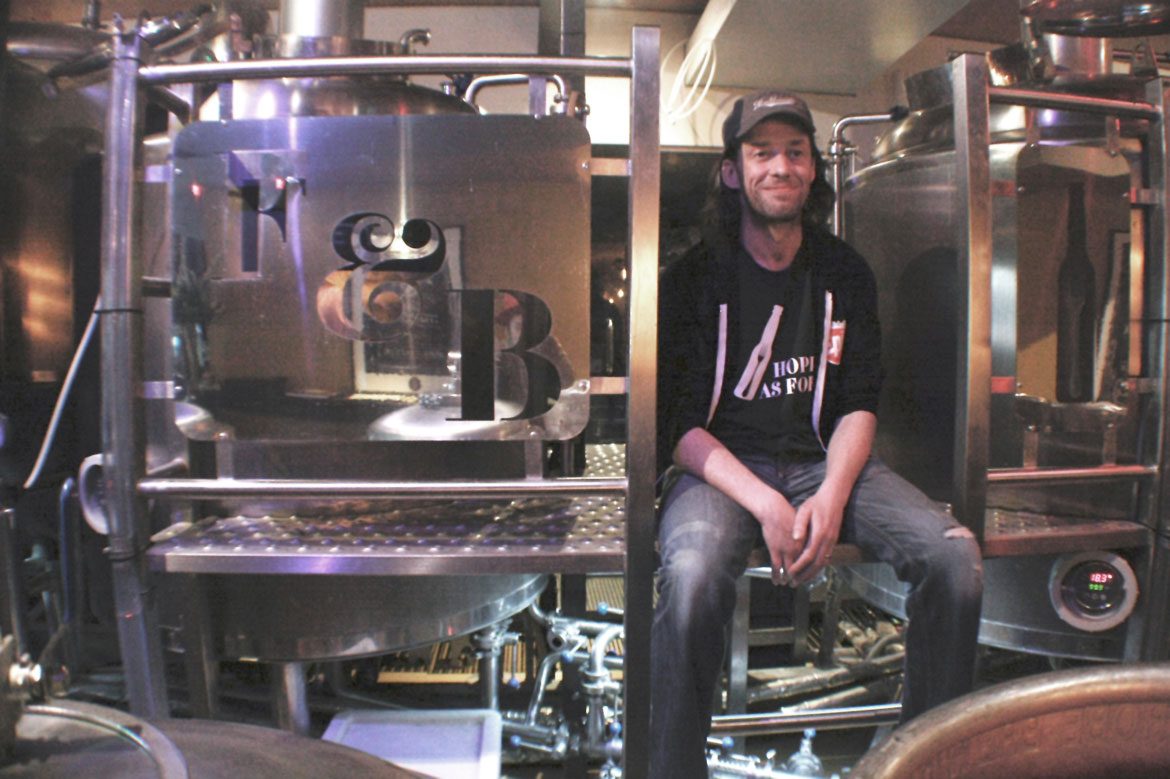 The festival was moved to the beginning of the three week food celebration Wellington on a Plate, after being shoehorned in the middle weekend last year. For Colin (pictured above at the Fork & Brewer), the new slot can give the beer events more breathing space and potentially entice more international visitors.

An industry-developed collection of beer events called Road to Beervana is growing to mirror Good Beer Week, with food pairings, tastings, and fun events such as music quizzes. By drawing in beer tourists in the week beforehand, it is creating a different flow of traffic from the usual Wellington on a Plate crowd.

“The beer events last year were lost a little bit in amongst the high end, high volume food events," says Colin. "The beer market hasn’t matured enough to stand on its own two feet in amongst all that noise. Give it a bit of breathing space and I think it’ll really blossom.”

Keeping the beer festival’s own vibe will make the difference on whether international or out-of-town attendees return for a second, third or fourth visit.

“I don’t think you want to turn Beervana into a cookie cutter event where it’s the same thing every year. When visitors come back they want to experience different things and see things in different ways. It’s awesome they want to make that pilgrimage, but you’ve got to keep it exciting.

“It’s already the premiere event in the New Zealand beer calendar; we can continue to grow that into something like what you see with GABS, which always turns it up to eleven. “

Wellington as an international beer destination may still be in its growth stage, but as you watch Colin’s varied customers stop to pat him on the shoulder, thank him, or try to blag a cigarette, it seems that hitting the mainstream might not be all that far away.

“We’re still getting there,” says Colin, “but it’s damn fun in the meantime.”

Drink In or Takeaway

Craft Beer Capital is a great site with which to plot beer-centric adventures in Wellington. Our Man In NZ: Kiwi Hops

The New Zealand hop industry produces some of the most sought after varieties in the world. Jono Galuszka spent time with NZ Hops and one of the lead scientists behind the development of new hops to find out more. read on