For some, becoming a brewer develops from a passion that snowballs and eventually turns into a profession. For others, like Revel Brewing's Matt Cuthbert, brewing is a career that's followed a path from high school familiar to people in almost any other industry.

Exiting high school with the intention of becoming a teacher, he was forced to change paths after his scores fell short of the required mark. A Geelong boy, his eyes shifted northwest, around 90 minutes up the road to Ballarat, where the University of Ballarat (now Federation University) offered a long-running course that piqued his interest.

“I went up to the uni for a lecture and listened to the head of the course talk for about an hour,” Matt recalls.

“Pretty quickly I thought that this was much more interesting than teaching.”

That lecturer was the legendary Peter Aldred, who helped guide Matt on his brewing journey after enrolling for the course, and now heads brewing at Aunty Jacks in Ballarat.

“I remember heading to the uni bar and having a pot of Uni Gold, brewed by Peter Aldred at the university, and just being blown away," Matt says. "It was completely different to anything I’d ever had."

Although he enrolled in the course, Matt says it still took time to know brewing was what he wanted to do long-term, and it wasn't until towards the end of his studies that things really clicked.

“Once we got into the last six months of the course and were working in a lot more of a hands-on capacity, that’s when I knew I wanted to do this for a living," he says.

“I know it’s different to how a lot of brewers started. I guess a lot of people nowadays might be brewing on the side while working another job and decide one day to pursue brewing full-time, while for me it was something I just did straight out of high school.”

From Ballarat, Matt moved onto his first brewery role in Geelong, at the operation that was about to be rebranded as Southern Bay. While learning to apply his studies in a practical way was an important step for Matt, he says one of the key factors in his beer education was brewing beer there for others.

“I would watch some of the pioneers of Australian craft brewing come through and brew things that were completely outside what we were doing,” he says.

“Breweries like Two Birds and Boatrocker – it was eye-opening. I was starting to see the shift within the industry and it was a real jumping-off point for me.”

After more than seven years at Southern Bay, Matt took some time away to travel, heading to places like Oregon to witness America's craft beer industry firsthand. He got to meet the likes of Ben Edmunds from the award-winning Breakside Brewery in Portland, who since travelled to Australia as a guest of Good Beer Week.

“We went over to the Hop Harvest Festival in Portland and were taken to Breakside," Matt says. "Ben was just awesome, he spent a lot of time with us. He was a really cool guy who brewed some really awesome beers.”

Upon his return to Australia, Matt moved between roles, spending time back in Geelong with his partner while working at the now-defunct Odyssey Tavern in Mt Duneed, when it was one of the few venues promoting craft beer in the area, before going on to release its own line of beers.

Looking for a new challenge, Matt made the move to Sydney to start working at Rocks Brewing Company just as Sydney's inner west beer scene was exploding.

“I remember when I started with Rocks, I thought their brewhouse was quite innovative, which was really cool," he says.

“Being a part of that movement felt very special. Craft beer was going nuts in the inner west, and it was very cool to feel like we were in the middle of it.”

After close to four years in Sydney, Matt decided it was time for a change. Eager to help build something from the ground up, he headed north to join the team at Revel Brewing Co (initially called Malt Brewing) as head brewer, which scratched the proverbial itch.

“Instead of working for other people, I wanted to create something new,” Matt says.

“It was what I wanted, but as most head brewers would attest to, it was also absolute mayhem.”

Looking at how things have changed since Revel opened in 2017, he says there is still a sense of mayhem, but wouldn’t have things any other way.

“In October last year we were on the verge of having a baby, had just bought a house, and were opening a new venue, so things were pretty hectic, but really, that’s all part of the fun.”

To find out more about Matt, we invited him to take part in our long-running Brew & A series.

A tour guide. Later in life, I did a lot of travelling, saw a lot of different places, and did a lot of exploring. I love meeting new people, so being a tour guide would be a good mix of it all.

Went to Ballarat Uni to study brewing under Pete Aldred straight out of high school.

It’s really hard to pick. Revel IPA would probably be what I would go with, it was one of the first four beers we brewed. Each time we re-release it, it’s always my favourite.

Alcoholic Root Beer at Rocks Brewing. It was a GABS project my old boss wanted because he had spent time in the US. We did a lot of research, got into all the herbs and spices needed. It came out pretty close to the brief in the end, but none of us were a big fan of making it. One of the strangest beers I’ve ever brewed.

Breakside Brewery in Portland. One of the best and coolest breweries I've been to, and I'd love to work with Ben Edmunds.

It would have to be one of my own beers, Revel Pale Ale. From elsewhere, Prickly Moses ChainSAW.

Nothing is ever easy.

It's a lot of hard, dirty work. Be prepared to get your hands dirty! Nothing is ever easy

You can find other Brew & A features here as well as both of Revel homes and hundreds of other good beer venues around Australia in the free Crafty Pint app. 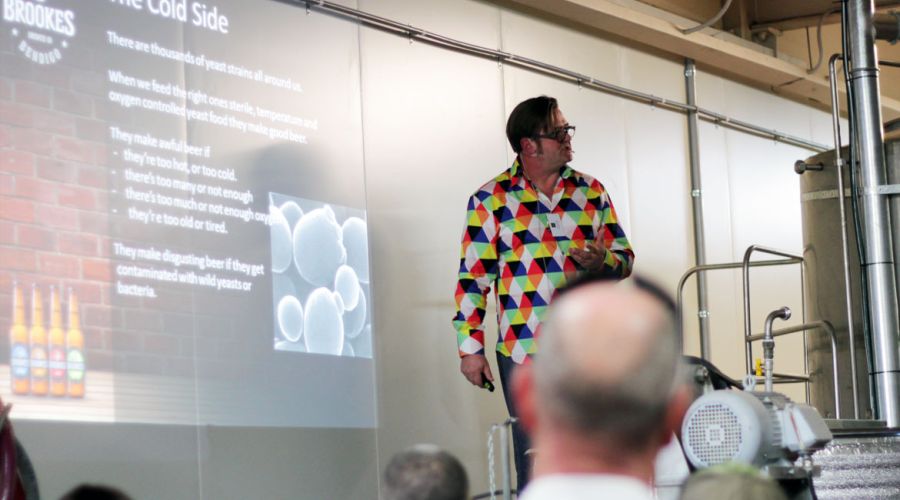