Kevin Martinovich’s fascination with all things fermented led him into a career encompassing retail, hospitality, and global travel. Now with his own brewing company producing liquid that featured in the 2022 WA Good Food Guide Beer of the Year Top 25, we invited him to take part in our long-running Who Brews...? series.

We’re currently gypsy brewing out of Funk Cider’s production facility in Caversham, on the edge of Perth’s Swan Valley.

What's the inspiration for the brewing company name?

Thinking of names for beers and indeed the brewery was one of the hardest things to do to get it started. I’m not sure if I saw the word Aetheon somewhere, or I just thought it up, but it clicked as soon as it came into my head.

It has roots in ancient Greek and Roman mythology, and can mean to shine or to burn brightly. Realistically, though, I think the product defines what the brand is, and therefore what the name means, so I’m hoping that some time in the future Aetheon will simply mean good beer.

What a question! I suppose I brew because I like it, but why do I like it? Because I get to make beer, how awesome is that?!

I like to create and design things, and I like playing with flavours and brewing is an awesome way to do those things. It’s the perfect mix of science and creativity for me: I can be creative when thinking of new flavours and scientific in the execution of them.

It’s not just about making the beer it’s about perfecting each recipe and continuing to learn and grow – and I enjoy learning more about beer and making beer.

Well, something about alcohol has always interested me. At 18 I went into the liquor industry working at Liquorland, where one of the first things I taught myself was the difference between an ale and a lager.

Working in a chain retail liquor store wasn’t really the glamorous exposure to the alcohol industry that I thought it would be, so after three years I decided to move into the hospitality industry. I worked in a few bars which have since closed and found myself working at Strange Company in Fremantle. I really enjoyed mixing and making cocktails, which I think comes from the same enjoyment I have of designed and making beers.

After a year behind the bar at Strange, I wanted another change and was lucky enough to get a production role at Funk Cider where I’ve been until starting Aetheon. At Funk I learnt a lot about the industry, about how small business is run, and about how to manage production, among a lot of other things. This entire time I was homebrewing as well, just brewing beer and tweaking it and brewing some more. So, while I was at Funk I decided that I’d like to have a shot at doing the whole business thing myself, which set the wheels in motion for Aetheon.

I would have to say that travelling through Germany and Belgium was the moment where I actually really started to enjoy beer. This was many years ago now, but before that point I actually wasn’t a huge fan of beer.

Being in Germany where the beer is cheap and then in Belgium where the beer is so interesting definitely changed my mind. In terms of actually wanting to make it, that came a little bit later, and I’m not sure exactly why I did my first brew, but I think it was a combination of it was interesting, thinking I could do better than what I was drinking, and just wanting to try something new.

Currently we’ve got our core range beers: Mid Strength, Sour, Pale, WCIPA and NEIPA. We’re hoping to add a Pilsner to the core range early next year, and of course an endless amount of limited, and possibly seasonal brews.

In terms of limiteds, nothing is really out of bounds, think from interesting takes on saisons to pastry sours and stouts.

Of those, what beer best represents you, and why?

I would say the New World Pale. It’s definitely my favourite of the core so far, and it’s the one that I picked because it’s not too heavy on the alcohol, it’s super easy to drink and it’s a little bit interesting. Packed with Sabro, it’s a little controversial but I think that just adds to the fun of it.

Actually, I’m pretty weird and I don’t usually listen to anything while I work. I’m not sure why; sometimes if I’m doing a super repetitive task, I’ll listen to music but most of the time I don’t!

That being said, when I do listen to music it’s usually a pretty mixed bag of rock, pop, hip hop, indie and electronic, with a fair whack of Aussie artists.

Man, I think the go to answer for brewers for this question is Saison Dupont however that’s probably not what I would pick. I think for myself I have to go with Boon’s Oude Geuze. I love the idea of lambics and geuzes and this one is a truly, truly fascinating beer. I usually don’t go for the wild-fermented beers as I find them too acetic but this one just hits the spot for me.

This is pretty tough for me because I don’t actually know a lot about historical people in the brewing world. Honestly, any brewer from a brewery that has pioneered something in one way or the other I’d love to brew with and learn off.

Last year, I just managed to sneak in the sour to the core range before it got hot and, for three years’ time, I’d like to have expanded the production facility, and for sure have at least one sales rep and marketing person on board to look after that side of things. In that timeframe I’d also like to be looking at our own production facility and most likely a bar somewhere.

In five years' time, I’m hoping to be in our own production facility with possibly our own packaging line and, of course, staff to look after it. I’d like to have at least one bar/taphouse at that point with a view to open another that offers a different sort of service/experience.

They’re not exactly in my fridge, but breweries that I always like to visit include Seasonal and Wild Hop. There’s a lot of breweries in WA that do really good beer, including these two, but they’re the venues that call to me either when I go down south, or when I’m in Perth. Honestly though, I will try anything; I’m super picky when it comes to food, but completely open to anything when it comes to drinks.

I’d have to say a couple of releases by Impi. Specifically, the Quadfather and the Wheat Whisky Barrel-Aged Stout that they released late last year. I’m all about the big, dumb, high alcohol, malt forward beers and these two absolutely check those boxes. Impi also explore a lot of interesting styles, and do interesting things, which is inspirational.

I’d love to explore putting whatever the heck I want into beer a little more. I’m sorry to the Germans but I am definitely not a follower of the Reinheitsgebot. Long before that came into effect people were making beer out of malt mixed with honey or wine or other fruit bases and that’s something that I find really interesting.

Besides that, I find ancient and no-longer-produced styles of beer fascinating and that’s definitely something that I want to explore a little further.

The beers and finding their way into more and more stores, but for now it’s mainly the independent and craft-focused stores that are stocking us. We keep an updated list of stockists on our website. 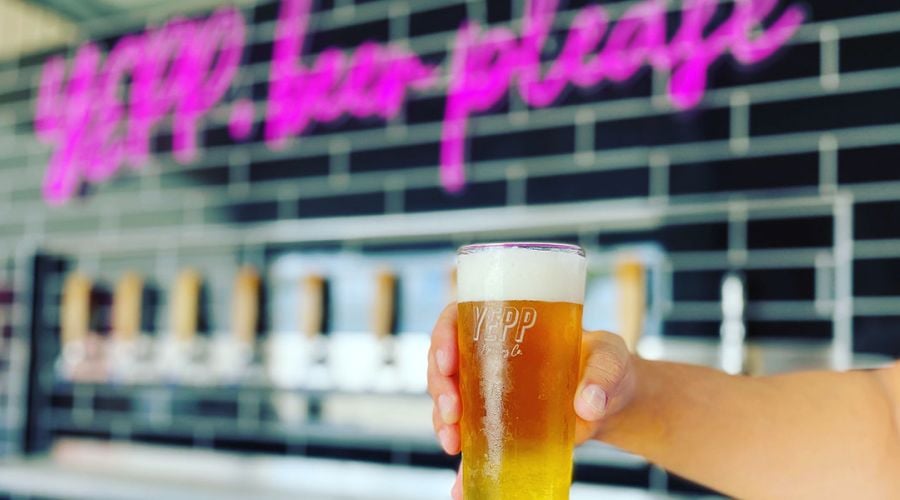