White Rabbit's On The Hop

White Rabbit's On The Hop

Little Creatures' little sibling is to leave its warren in Healesville and move to a new home in Geelong. Lion is to build a new dedicated White Rabbit brewery in one of the currently vacant buildings at its Little Creatures Geelong site, where Dark Ale production had previously been moved, and will close down the site and venue in Healesville. The existing White Rabbit brewery will remain operational until May 2015, although what will happen to the equipment is as yet undecided.

Lion confirmed its decision yesterday to The Shout, with the move of the brand launched in the Yarra Valley in 2009 coming after an "extensive review" that we reported on back in September. They accept there will be a "small number of redundancies" and are looking to move staff to positions elsewhere within the business where possible.

Lion's External Relations Director Elise Gare told The Crafty Pint: "We were quite restricted because of the capacity at Healesville. This is an opportunity to grow the White Rabbit brand.

"By bringing Little Creatures and White Rabbit together on one site we will actually have opportunities to create more of a craft brand rather than having separate sites.

"We're still working on the transition period. Over the next couple of months, we will work out what equipment we will move [to Geelong]."

When Little Creatures Geelong (pictured below) opened on the sprawling industrial site in 2013, they stated that the intention always was to create a brewery village over time, bringing more of the warehouse spaces into use.

"There's lots of ideas," head brewer Warren Pawsey told us on the day the hospitality side of the site was launched. "An art gallery, cheese maker, coffee roaster… These buildings have very high ceilings and are very atmospheric."

They are already introducing a hop garden in partnership with the Little Veggie Patch and the decision to build a new standalone White Rabbit brewery on the site is in keeping with those initial intentions to utilise the empty spaces. What it means for Healesville and the Yarra Valley, which will lose one of its main beery tourist attractions, remains to be seen. 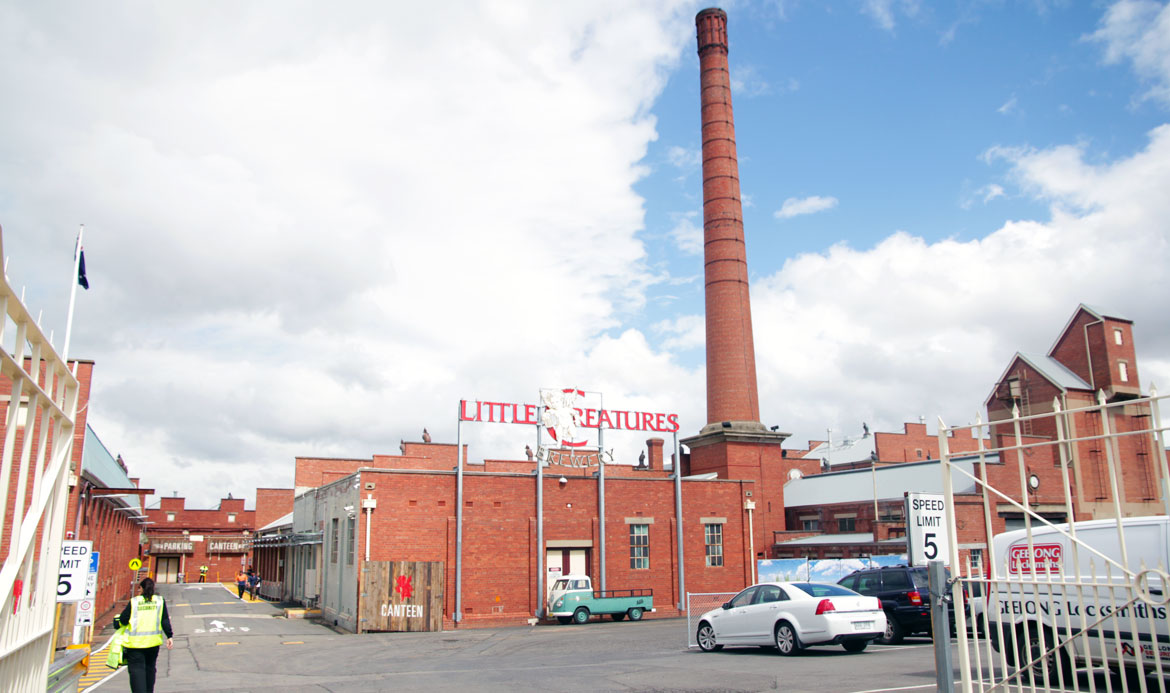 Lion's media statement on the decision

"White Rabbit is an essential part of our craft portfolio and it is becoming increasingly popular with lovers of great craft beer. Unfortunately, our ability to expand our brewing capability to meet the growing demand is restricted at the Healesville site so we have decided to move White Rabbit to our Geelong Brewery where we will be better able to meet demand. We will be making a sizeable investment in our Geelong site to accommodate White Rabbit.

"The Healesville site will close at the end of May 2015. Regrettably, there will be a small number of redundancies associated with the closure of the site. Our people are our number one priority and we will be working with them to provide all the necessary support during this period of transition.

"The craft beer category continues to experience strong growth in Australia and Lion is committed to investing in innovation, our craft beer brands and breweries to ensure the future growth and sustainability of our portfolio. At this time of growth in craft beer, it is important that we continue to assess our operations to ensure we are equipped to leverage the opportunities that exist in the category."

"White Rabbit will essentially operate as a standalone brewery within our site in Geelong, with its own dedicated space in a building that is currently unused. We describe White Rabbit as a craft beer that offers 'fermentation with imagination' and the opportunity we have in Geelong is to really bring that to life, as we build the White Rabbit brewery into one of the most unique craft beer experiences in Australia. By bringing Little Creatures and White Rabbit together in one site, we hope to make the Brewery as famous as our Little Creatures Brewery in Fremantle."

So what are your thoughts? Something that was expected after the review was announced? Delighted for Geelong? Sad for Healesville? Want to buy the brewery?