A few years back, this Thornbury bottleshop was just another run-of-the-mill outlet ticking along steadily without pulling up any trees. Then it was taken over by a former viticulturist raised in the heart of West Australia’s craft brewing culture and things began to change. Ben Carwyn began stocking boutique beers and wines and the northern suburbs had a bottleshop worth hunting down.

Since then, it's moved up the road, continued to expand the bottleshop side of the business and now added a bar. And what a bar: the entire back of the venue has been taken over with the centrepiece a huge, wide font pouring 20 taps of all craft beer and cider (except for one tap that pours Negronis...). Its tap takeovers and brewery showcases have become monumental affairs featuring some of the very best beers to be found on these shores – and often, somehow, those that usually can't be – and there's now a beer garden at the rear too.

The bottleshop stocks hundreds of beers, with homegrown brews from Australia’s finest sharing fridge and shelf space with imports from across the globe. Traditional ales and lagers from Europe sit alongside big, ballsy and cutting edge styles from all corners – the store tends to get its hands on a fair number of uber-rare releases too.

As such, it’s become the epitome of a good local, with knowledgeable staff eager to guide regulars towards new beer adventures. Carwyn’s success is something of a barometer for the growth of the craft beer market in Australia too, with one staff member once telling The Crafty Pint, for a Sunday Age story about luxury beers: “It’s easier for me to sell a $40 bottle of beer than a $40 bottle of wine".

As if to further prove the point, in 2017 Carwyn launched Club Wild, a bi-monthly beer club specialising in sour, wild fermented, mixed fermentation and farmhouse style ales. This was something they'd long been wanting to do but hadn't felt able, believing they couldn't source the kinds of beers to do it justice. But as more local breweries have opened and drinkers have become increasingly interested in all kinds of beers – whether it's an extremely rare one from the USA, something barrel aged for years in Belgium or some of the most sought after domestic drops – Carwyn has been able to fill its shelves and taps with the very best from home and abroad.

But, for all that, it’s not just about the beer. Classy nibbles, a wide selection of wine, cider, Perry and spirits line the walls and the events they throw – pastry stouts paired with pastries kicking off at midnight, anyone – are as innovative as any of the beers they stock too. 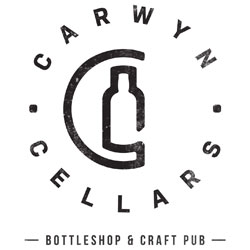