There are few places in Melbourne where the Irish population is more concentrated than near the beaches of St Kilda, so it’s only logical that the suburb plays host to its fair share of Irish pubs. But when Irish expat Liam Ganley designed The Fifth Province on Fitzroy Street in 2014, he had more in mind than your typical pub with Guinness on tap and fish ’n’ chips on the menu.

To bring some new energy to the place, he brought in beer lover Fin Brennan as his general manager, who immediately got to work on bringing the wood panelled bar and restaurant into the 21st century – at least as far as the tap list is concerned.

While you’ll still find plenty of Irish whiskies and stout being served, the taps have also been freed up from any contractual requirements to make space for pale ales, IPAs, Belgian beers and barrel-aged specialties. On any one visit, you might come across a tap list featuring 4 Pines, Mornington, 2 Brothers, Hargreaves Hill or Wolf of the Willows, while the backpacker just keen on a cold stubbie can still grab a Tooheys or a Magners from the fridge if they so wish.

Live music five nights a week keeps the punters coming back for more, as do the weekly steak nights, burger deals, and full Irish breakfasts designed to keep the hordes happy on weekends. Indeed, it is the quintessential locals pub, with regulars making up a large portion of the crowd on weekdays, while beer lovers from around Melbourne drop in on weekends for a filling meal and a good beer.

Hat tips to the pubs of Éire are found everywhere, from the faux frontage of the famed Dublin pub O’Donoghue's tucked at the back, to the mid-century Guinness posters on the walls, to the many display bottles of whiskey showcased proudly in booths near the bar. It sounds like a lot, but every small touch comes together to create the impression that The Fifth Province has simply always been there, and so has all the décor.

Thanks to a generous amount of outdoor seating and plenty of spots to pull up a chair either along the huge wooden bar or dotted around the restaurant, this is a place that really hums when busy. But even in its quieter moments, The Fifth, as it is affectionately known, is an enticing spot to settle in with a pint and a good book, or for a quick lunch with an old friend.

And what a lunch it would be. The kitchen focuses its attention on heart-warming meals that wouldn’t be out of place at a pub in Galway or Cork, with traditional dishes such as beef and Guinness stew, bacon and cabbage, and cottage pie all making appearances alongside Aussie classics like the chicken parma and steak sandwich.

Pair it with a pint of Two Birds or Bridge Road and you’ll be looking up rentals in St Kilda in no time, wishing The Fifth was your local. 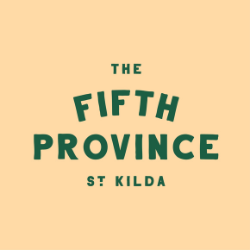