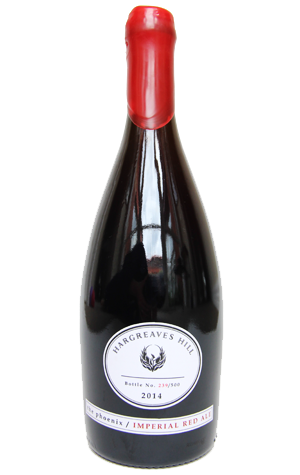 To mark their 10th anniversary as a brewery, Hargreaves Hill revisited the beer first brewed to mark their relaunch after the original brewery was destroyed in the Black Saturday fires. The Phoenix is a rarely seen style – an imperial red ale – and a beer that is rarely brewed even by Hargreaves. This is only its third run out and, once again, there is only a handful of kegs and a small number (500 this time) of individually number and wax-sealed 750ml bottles.

The beer has had a wee tweak this time around but remains, to all intents and purposes, the same beer. In other words, one of our favourite drops of decadence to come out of the Aussie beer world. It pours with what the brewers are calling a "stately red hue", in other words a deep russet colour with maybe even a touch of maroon and a proud tan head, and at this early stage offers up plenty of hop character – predominantly pine with a touch of citrus and resin – with its rich, fruity, Christmas pudding maltiness. Over time, this glistening beast will become more about the malts, developing layers of toffee, stewed fruit, vanilla and liqueur like qualities suggesting you may like to snap up two: one for now, one for when 2015 arrives.

Bottles at the linked venues plus: