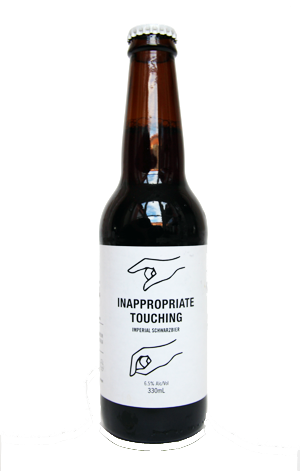 On the opening Sunday of Good Beer Week, Hawkers Beer in Reservoir hosted brewers from Edge Brewing Project, KAIJU!, Evil Twin and Baird Beer plus a host of paying guests for the festival's fourth annual collaboration masterclass. Ostensibly, the day is as much about bringing together top brewers and beer lovers for a day of entertainment and enlightenment (and engorgement) but while all that is going on a beer is made too. In the past it's seen a double black IPA come out from Nogne O / Moylan's / Hargreaves Hill (2012), a Hopfweizenbock from Mountain Goat / Brooklyn (2013) and a barrel aged smoked barley wine from Moon Dog / Rogue (2014).

For the 2015 collab, the brewers settled upon a dark lager and set out to up the booze and hops into "imperial schwarzbier" territory. At 6.5 percent ABV it's not imperial in the sense of many of the IPAs and stouts of that nomenclature you see and, in fact, it's fairly restrained all round. It has the dark brown-with-ruby-tinge look you'd expect of a schwarzbier and a touch of roast and light coffee alongside dark chocolate and cola characteristics from the malt. There's also something herbal in the aroma plus a touch of sarsaparilla to taste, as well as a depth of hop flavours, although no overt accompanying bitterness – despite some of the participants.

As for the name, well, there were five sets of brewers working together for the day plus free-flowing beer from mid-morning...