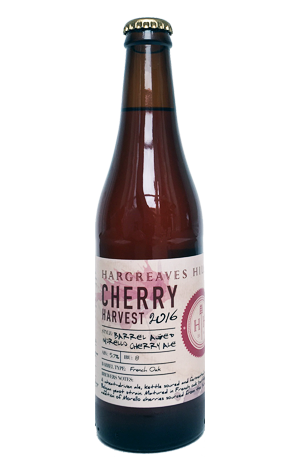 The last of the trio of limited run beers released in 330ml bottles in quick succession by Hargreaves Hill is the latest iteration of its Cherry Harvest. It's a beer that's appeared before on tap and that makes use of both French oak barrels and Morello cherries sourced from the brewery's neighbours in the Yarra Valley. They're used to add character to what started out as a kettle soured beer that's heavy on the wheat.

The cherries lend the beer the deep pink hue of a darker rosé wine and combine with the French Barbe Rouge hops to contribute cherry, red berry and strawberry aromas alongside soft spices akin to those you'd find in a Belgian witbier. The fruit adds both sweetness and a touch of sour to the flavour too in a beer that's more cleansing than puckering, aided by a faintly dry finish, perhaps the result of time in oak.